'You're spending money where it doesn't matter' | Impassioned speech against a review of the St. Louis County police board

“You say this is a review of best practices, but we have several rich documents whose recommendations and suggestions we have not been following," Dr. LJ Punch said

ST. LOUIS — Why do we think reducing crime is an issue for police?

It was a question St. Louis County Police Board Commissioner Dr. LJ Punch leveled at St. Louis businessman Tom Irwin during this month’s board meeting.

And it was one of many comments Punch made during an impassioned speech before she became the lone vote against a plan from Irwin’s employer, Centene Corp., and other businesses to pay a consultant to study the department’s policies and practices and recommend changes.

“This is the first time as a police board member I am hearing any detail about this,” she said. “I heard about it for the first time in the last two weeks in very terse terms.”

County Executive Sam Page announced the department would be undergoing the review just weeks ago in a campaign ad and in the media. It was done unbeknownst to the board, which runs the police department.

Irwin told the board discussions to do the review began with county leaders in January, and he couldn’t answer questions about the “communication channels.”

“But my concerns are more so fundamental,” Punch said. “You say this is a review of best practices, but we have several rich documents whose recommendations and suggestions we have not been following.

“I’m fundamentally having a hard time understanding how resources at a time of economic decline should be put into a review. We already have the Ferguson report, the Department of Justice report, homegrown St. Louis reports and many others like that which would give us rich local information. I actually don’t have an objection to the openness. There are so many foundational questions. This concerns me greatly because right now our communities are looking for action and solutions and money is tight. Why should we spend money on a study? What is it we’re trying to achieve? I love that business leaders are getting involved in violent crime and behavior and with those touched by it, but I don’t think we’ve had enough of a foundational discourse about how to touch those things and how to change those things.”

Irwin added: “If you don’t want to go forward with this, that’s fine, but let us know and the sooner the better. The funds have been allocated, period.”

“You’re putting money where it doesn’t matter,” Punch said. “I’m not in favor of putting the police department into another study when we have multiple actionable things people are begging to be supported to reduce violence. I cannot condone using any resources, regardless of where it comes from, for a study because it is nearly emotionally abusive, gaslighting to ignore the multiple studies people have worked on with their blood, sweat and tears for and act like we don’t know what we need to do. It’s as if we don’t understand what’s going on. It is a horrible insult to the leaders who have put their life’s work into defining how we can go forward as a region.”

Former Chief Jon Belmar once outlined his plan for moving forward as a region.

His plan called for the city to contract with the county for police services. At the time, it flew in the face of the work St. Louis Mayor Lyda Krewson and then-County Executive Steve Stenger were trying to accomplish with an organization called Better Together. They envisioned a unified city and county in which all of the dozens of municipalities in the county would dissolve along with their police departments.

Now, the same review Centene Corp. and company are bringing to the county police department is coming to the city with the same consultant.

Any guesses on what the recommendations from the business community will be this time?

One is that of former St. Louis County police academy instructor Eric Austermann.

In the ad, he appears to be teaching a class of police recruits.

I wrote about Austermann for the St. Louis Post-Dispatch in September when he was accused of having an affair with a recruit.

The allegations first surfaced in a letter former police instructor Nikki Brown wrote to then Chief Jon Belmar’s administration alleging misconduct as well as racial and gender bias within the department.

The public will never know what discipline Austermann received as a result of the affair, but he was suspended for at least some period of time and no longer teaches at the academy.

I learned that when Associate County Counselor Maggie Hart-Mahon said he was appealing a 90-day suspension during a police board meeting about a year ago.

Police union officials said Hart-Mahon was mistaken when she said it was a 90-day suspension and voiced great concerns about Hart-Mahon’s characterization of the discipline in a public meeting.

But they didn’t offer to correct the actual length of the suspension citing personnel privacy laws.

Chief Mary Barton’s husband, Clay Peeler, also makes a cameo in the ad, taking pictures of what is presumably a crime scene.

Peeler worked as a longtime crime scene investigator for the department, but he has since retired.

The images of Austermann and Peeler run as a narrator talks about how Page ordered that “top to bottom” review of the police department — not the police board. 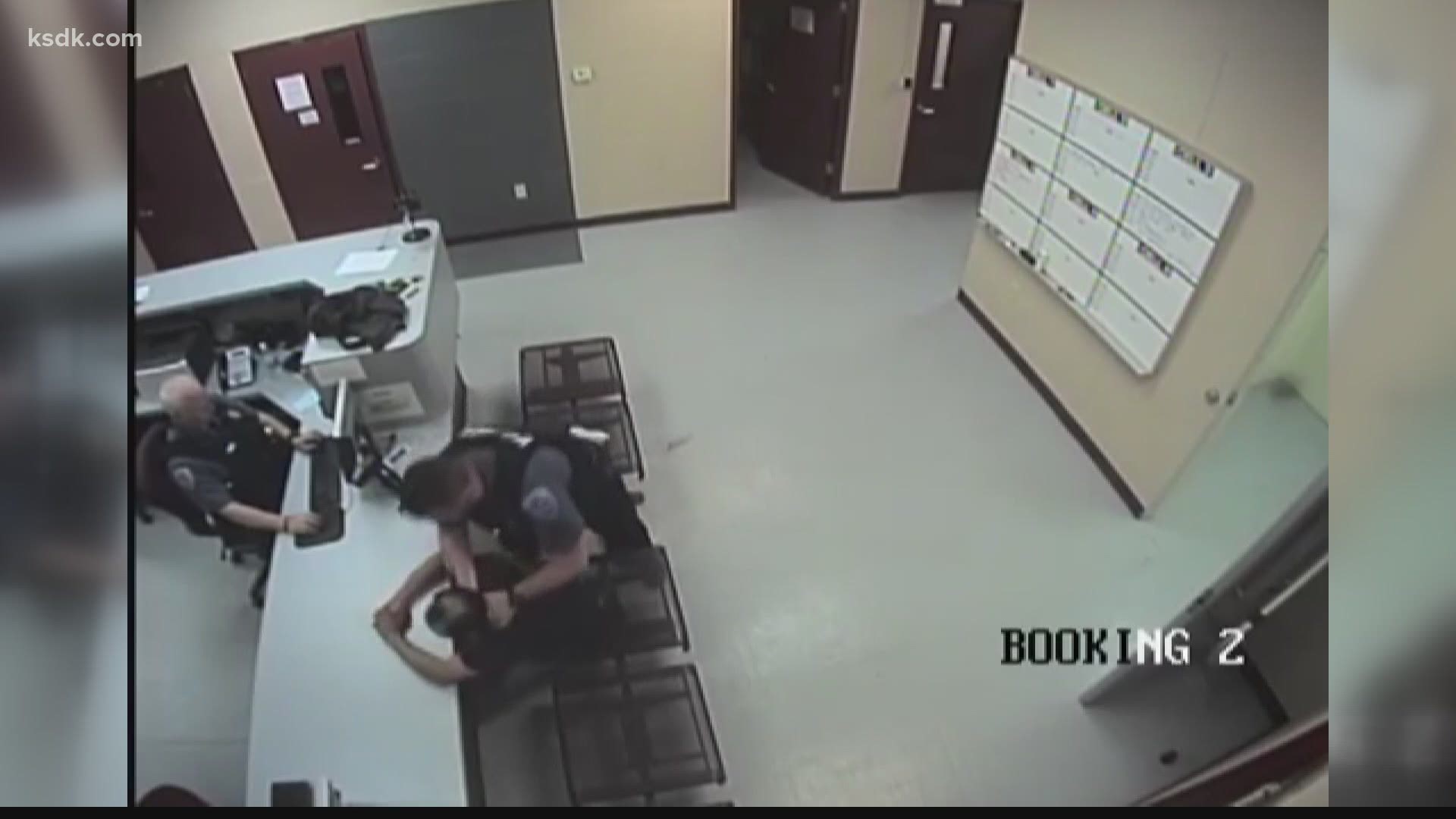