When he saw his son on a gurney, Ray Murphy said anger swept over him. “He is doing what the city asked him to do and to get shot doing the job is ridiculous"

Credit: Ray Murphy
St. Louis Officer Ryan Murphy sent this picture of himself to his father after being shot during riots in downtown St. Louis Monday to let him know he was OK.
Author: Christine Byers (KSDK)
Published: 4:10 PM CDT June 4, 2020

ST. LOUIS — Ray Murphy was only asleep for a few hours Monday when his phone rang just after midnight.

Then, he had to tell his wife what happened to their only child.

“I woke up my wife and said, ‘We have to go. Ryan’s been shot,’” he said. “And we got dressed as fast as we could and did not waste any time getting to the hospital.”

Once there, Ray said cops swarmed the area. He didn’t know yet, but his son was one of four St. Louis police officers shot that night. A peaceful protest over the death of George Floyd at the hands of police in Minneapolis had devolved into a night of violence unlike St. Louis has ever seen in recent memory. All four officers were struck in their extremities and have been released from the hospital to recover at home. 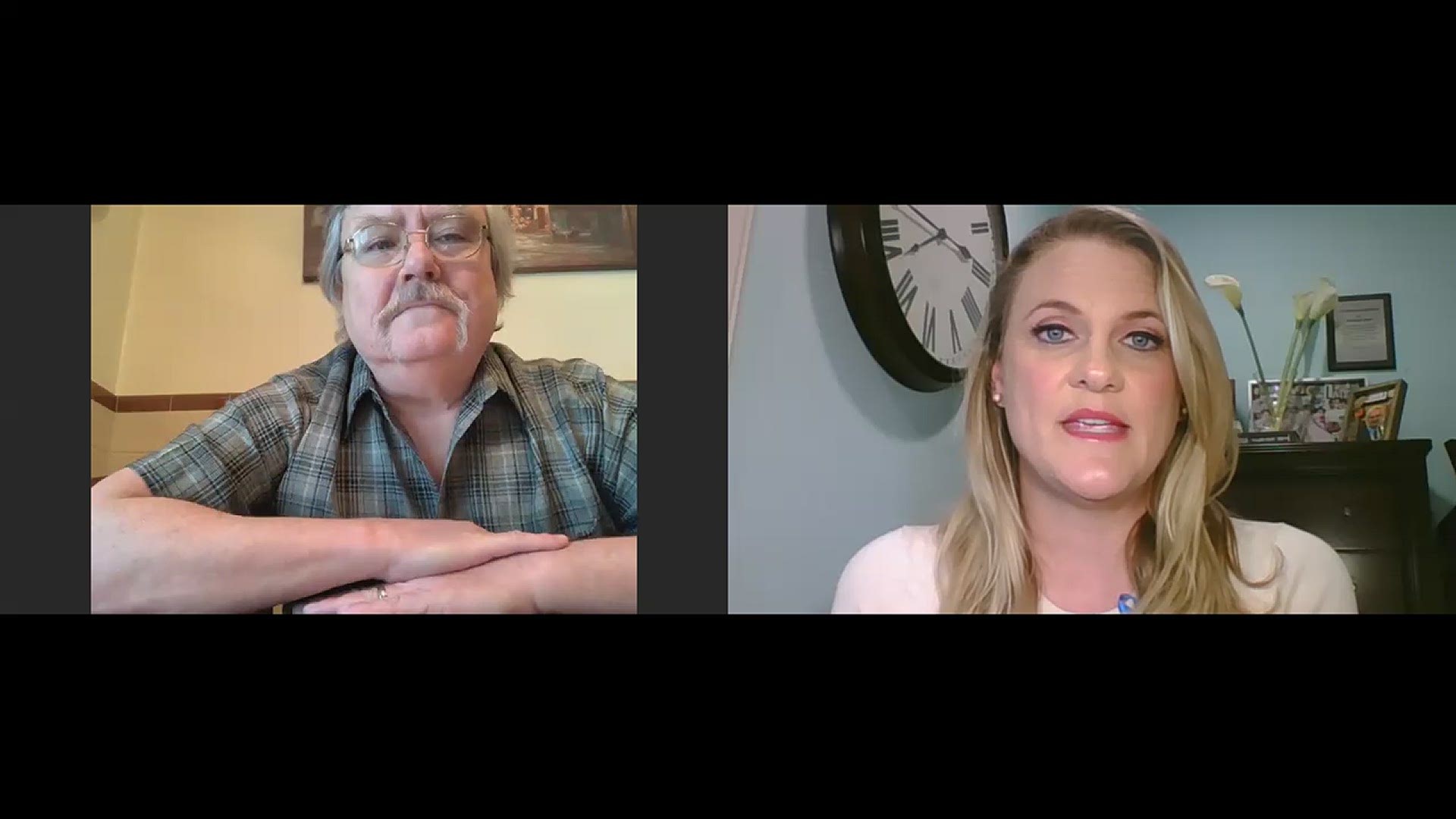 The department doesn’t allow officers to speak to the media. So, Ryan Murphy’s father spoke on his behalf in an exclusive interview with 5 On Your Side.

As he and his wife saw their 34-year-old son lying on a gurney that night, bloodied and somewhat out of it from pain medication being pumped into his body, Ray Murphy said anger swept over him.

“I was hurt and angry that my son was shot doing his job,” he said. “He wasn't out there to hurt anybody.

“He is doing what the City of St. Louis asked him to do and to get shot doing the job is ridiculous.”

Credit: Ray Murphy
St. Louis Officer Ryan Murphy sent this picture of himself to his father after being shot during riots in downtown St. Louis Monday to let him know he was OK.

Ryan Murphy told his father the following account of what happened when he got shot:

He told his father he remembers hearing his sergeant call to wake him.

He told his dad that he thought the shooter might have been firing from an elevated position based on how all of the officers were hit, and that no one heard the shots because they were timed with every launch of a tear gas canister fired by police.

A St. Louis man has been charged federally with being a felon in possession of a firearm. The charges are related to the "ongoing investigation into the shooting of four St. Louis Police officers," according to news release.

Police said Christopher Gaston, 40, was living in a condominium complex adjacent to the scene of the shooting. Witnesses reported seeing him with a gun Monday evening.

Police found footage on a security camera that showed Gaston carrying a long gun partially covered by a blanket, according to the release. Police did not directly link him to the shooting that left Murphy and the three other officers injured.

But police found two guns, a 12-gauge pump-action shotgun and a .380 caliber semiautomatic handgun, in his home.

Police said the handgun was loaded with five rounds and a box of 45 additional rounds of .380 caliber ammunition was nearby.

Gaston admitted he was a convicted felon and knew he could not possess a firearm, the release said.

The bullet that hit Murphy went through his left thigh.

It did not hit any major arteries or bone, his dad said.

But Ryan Murphy has told his father that he feels like part of his leg has been asleep ever since the shooting and believes the swelling is pushing on a nerve. He’s been surviving on antibiotics, Advil and ice to control the pain, trying to avoid the painkillers doctors gave him.

Permanent damage appears unlikely at this point, but only time will tell, Ray Murphy said.

He said his son will be out of work for at least four weeks – probably the hardest aspect of the experience for his son, he said. Both father and son are Army veterans. And more than 20 members of their family are police officers.

“He’s a hard charger,” Ray Murphy said. “He did his time in Iraq. It’s the soldier in him, the 'Let’s get back out there again.' It’s our nature.”

Ryan Murphy sent pictures of himself from his hospital bed to his father along with a short video of himself trying to assure his father and his comrades that he was OK. His eyes were bloodshot from tear gas exposure, and pain medication had already set in. His hospital gown covered part of his upper body, revealing many of his tattoos and the blood pressure cuff on his right arm. He held his head up and said: “Hey, through and through to the leg, I’m fine. I’m at Barnes don’t let this deter you guys from working on the street ... I’ll be fine. I’ll be out there shortly.” 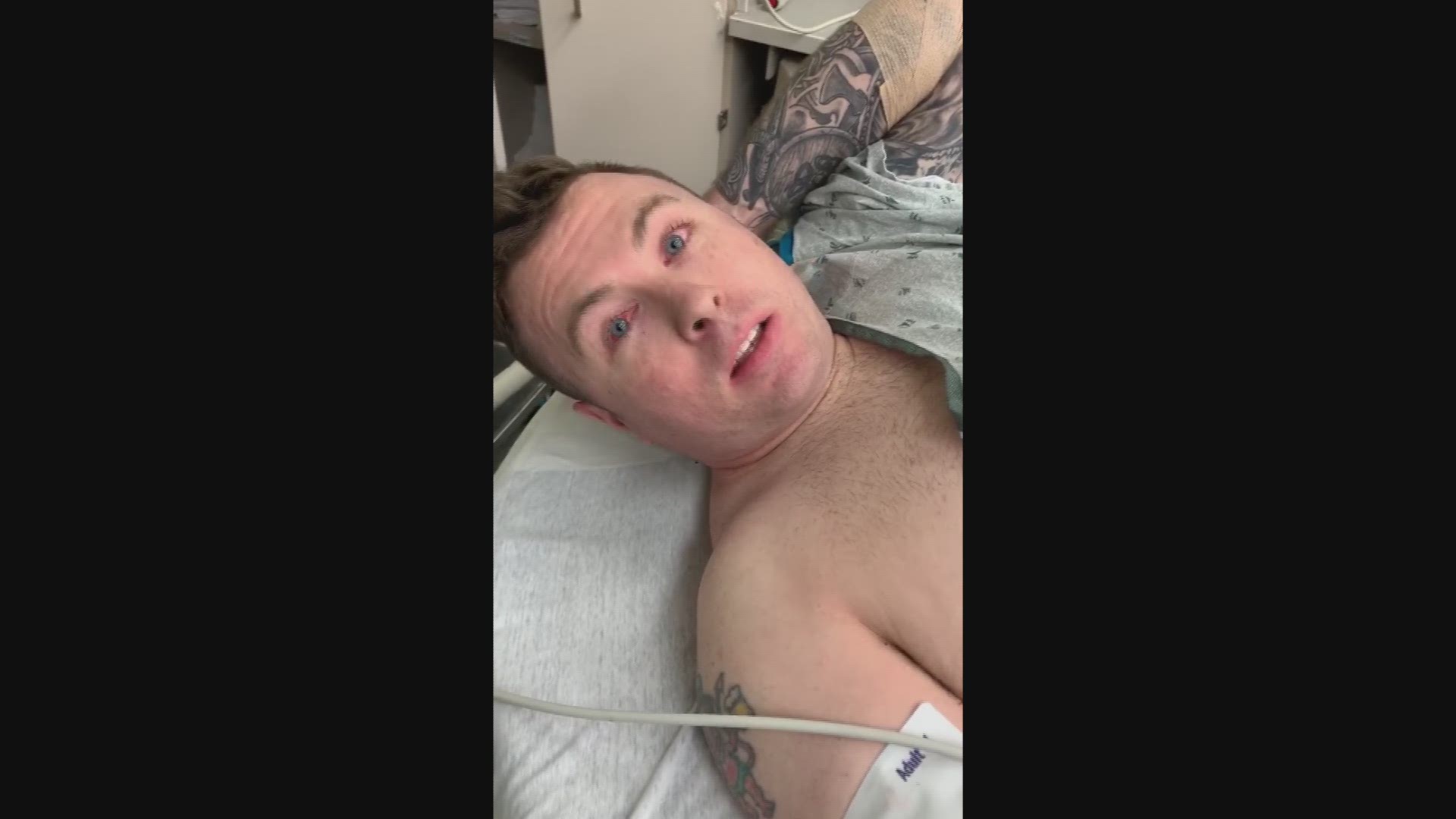 Ray Murphy choked up when asked what advice he has for other parents of police officers.

“Don’t take things for granted,” he said. “Always say, ‘I love you to them because you just don’t know…”

And he ended the interview.