An older, meaner Martin Riggs against Boyd Crowder in the snow. Are you up for that? I talked to the writer/director brother tandem about their film.

ST. LOUIS — "I can't believe they gave us money and let us make this."

Writer-director Eshom Nelms is recalling the experience of watching Mel Gibson face off against Walton Goggins on the very cold set of "Fatman," currently available at Redbox and via Amazon Prime Video. A movie about a decrepit yet skilled old Santa, aka Chris (Gibson) being hunted down by a cynical yet efficient hitman (Goggins), who was hired by an overly nurtured young kid after getting a lump of coal for Christmas, doesn't get made every year. The

"It was a lot of joy for us to dig into the world, and flesh it out some of these questions that we felt hadn't been answered before," Eshom noted about the reasons to climb into this particular jolly film genre with "Fatman," which he wrote and directed with his brother, Ian.

The brothers have worked together on a handful of films together, including the John Hawkes-starring gem, "Small Town Crimes." Their film aesthetic is very lived-in and rustic, no matter what setting or time period their films fall into. Eshom initially was drawn into comic book and storyboard art, while Ian tackled a degree in English on a wrestling scholarship (Thank you, IMDB).

But time always leads the brothers back to film, and their latest was just what 2020 needed to stamp a bad year shut. Blood-soaked yet highly-sophisticated, action-packed and hilarious slice of entertainment, one could say "Fatman" snuck through theaters under-appreciated. But it's gaining a steady cult following with expanded release.

"Fatman" definitely isn't your grandfather's sappy holiday fable. "A modern day Western/Christmas film" is how Ian describes it, and I would buy it. It's not like "It's A Wonderful Life," unless everyone gets shot at in the end. It's not "Miracle on 34th Street," unless the miracle knows how to knit a sweater and reload a gun. The Nelms Brothers didn't bother us with a familiar rendition; they sought out to make something different.

They found a great trio of lead actors at their disposal. It helped to have a script with characters that were well-developed and didn't feel like pre-cooked caricatures. But when you have an original idea and superb actor, that's when the magic happens. Marianne Jean-Baptiste, who plays Chris' very resourceful wife, formed something special with Gibson, both in front of and behind the camera.

"They got along so well. They had a great time together, and they had great chemistry." Ian recalled about their relationship on set. "They were as equally playful with each other on set as they were off."

But Goggins clearly steals the film, capturing some of the movie's finest moments, including the ride up to Santa's workshop for the big mission. According to Eshom, it was an on-the-spot idea that prompted the scene's construction, where the camera essentially follows the hitman, aka "The Skinny Man," through fast food drive-throughs, buying new gear, and stopping to buy some exercise equipment for his pet hamster. All of it was elevated by Goggins.

"That little section alone was great fun," Eshom said. I just thought, 'let's just take the car out, throw the camera in the backseat, and just have Walton drive around.' We probably filmed for six hours: Walton at crosswalks, messing with customers on the street,going into supermarkets to get stuff. It was a blast."

"Walton throws so much at you. He's challenging in a good way."

Actors like Goggins make filmmaking easy and fun because he gives you so much to work with. Ian talked about what he and Eshom look for when casting the film.

"We're always looking for what an actor can bring to a role that is above the script," Ian said. "You're happy with what you wrote-but we're always talking to them, and seeing what they would do. Just in speaking to them, you can feel how they use words and language. Is there cadence to their voice? Those sort of things mean something to us."

Goggins' particular style actually led to them changing one of their scenes when it came time to shoot it.

"With Walton, we ended up rewriting that intro scene for him," Ian said. "It just didn't fit before, because it didn't fit with what he was already creating. Walton was a lot more alpha than the role, but that's what we're looking for. Bring your pain and talent to the table!"

Working with Gibson, someone who has been around the block and back in his career, was a particular treat for the brothers. His ability to spot the tiniest details on a set was particularly impressive to Eshom.

"He was such a wonderful collaborator, and we've had some great ones. He's been doing it so long, both in front of and behind the camera, that there's nothing he doesn't see," Eshom said. "He'll ask what lens is on that camera. He's very generous with his knowledge. Every chance we got, we picked his brain. Mel told us all about making 'Braveheart'. So forthcoming. He's genuinely there, because he enjoys cinema. Even when he wasn't filming a scene and it was 10 below, he was out there, sipping a green tea and regaling the crew members."

As we finished our chat (which can be viewed in its entirety via Zoom later this week over at doseofbuffa.com), I told Eshom and Ian that cinema needed more films like "Fatman," because it felt like it came from a different place than most movies.

"Moviemaking is not a spontaneous activity. It's so planned out. But when it feels like rock n' roll, when it feels spontaneous, that's when you get really excited," Eshom said about the process of making a film.

"Fatman" should get you excited about little films with big hearts that can still entertain. 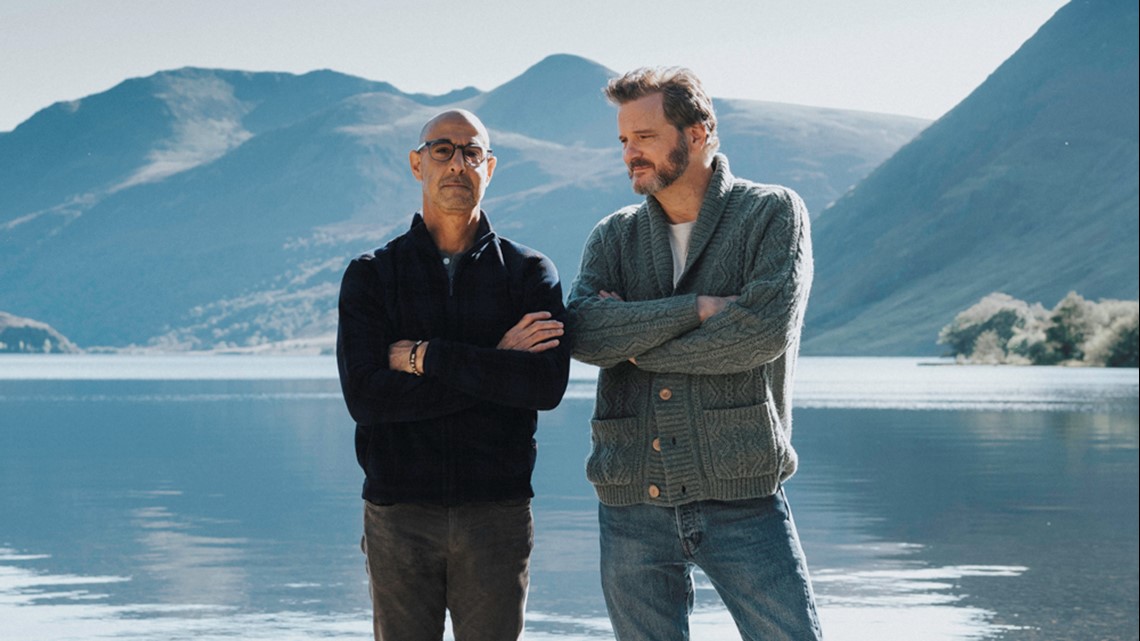 'Supernova' Review | Stanley Tucci and Colin Firth are extraordinary in hopeful yet honest drama
Fans of Firth and Tucci will adore their work in this film. A career high for both. ST. LOUIS - "I just look like him." Tusker (Stanley Tucci) is talking about himself, an older soul battling the more fierce stages of dementia, all the while holding onto a resemblance of his profound relationship with his partner, Sam (Colin Firth).