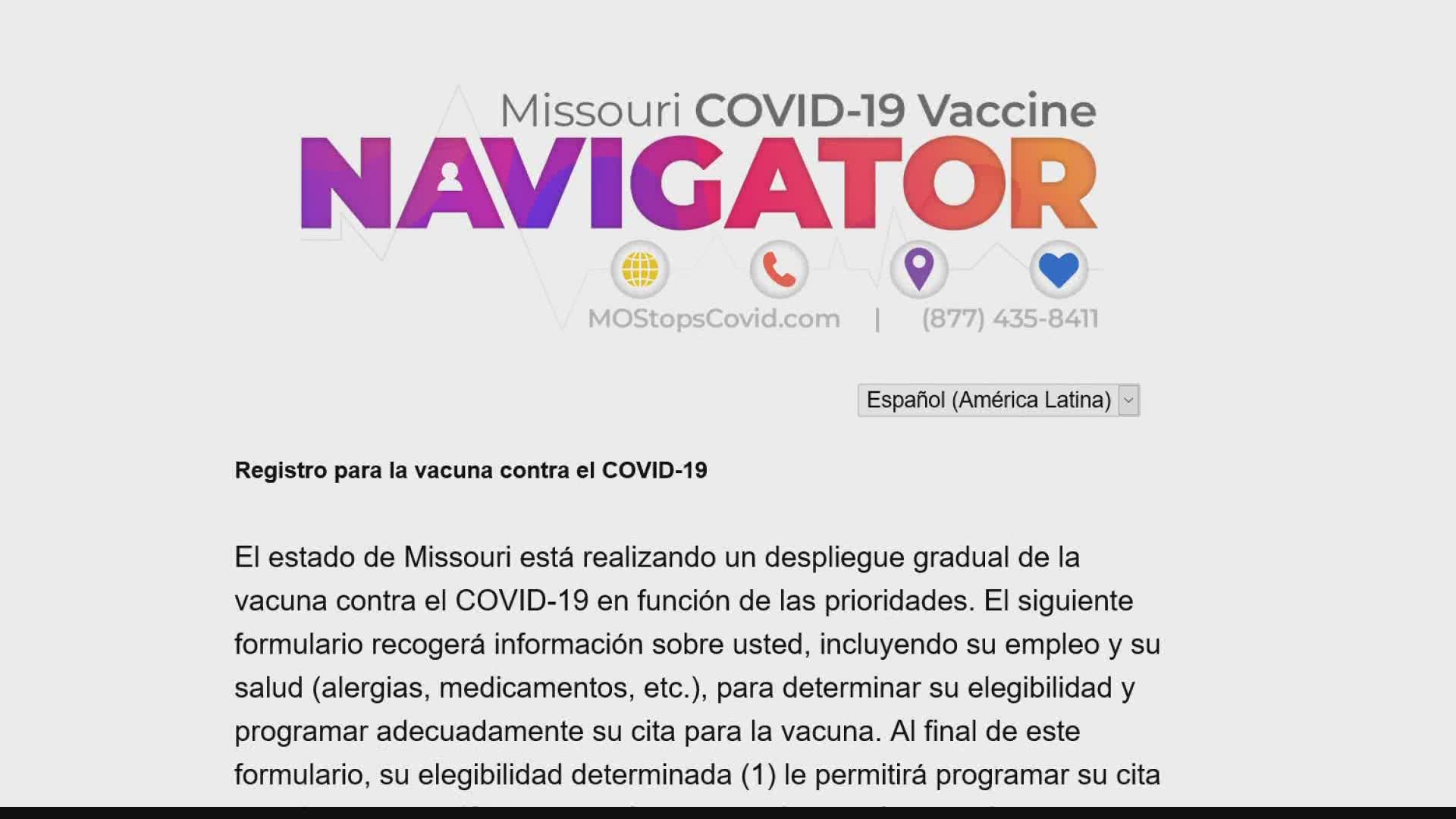 More than 8,700 Missourians have died from the virus.

Data shows Missouri rank in the bottom third among states for per capita vaccinations.

As of Tuesday, about 26% of Missourians are fully vaccinated.

That's why efforts are ramping up to get more shots into arms by eliminating barriers.

One way is through the launch of a Spanish language version of the Missouri Vaccine Navigator.

Over 150,000 people in Missouri speak Spanish. It's the second most common language in the state.

A spokesperson for the state said it's trying to eliminate barriers by doing this.

Yyvonne Buhlinger is the VP of Development and Community Relations with Affinia Healthcare.

She said it's conducted one event at the International Institute to reach different immigrants by having translators and access to different languages.

"We need to remove as many barriers as possible. Language is probably one of the biggest barriers for immigrants," Buhlinger said.

CEO Diego Abente says this move is a crucial step by the state.

"It's a very crucial step because it allows us providers to point to that website and say 'Look, we are making progress and reaching out to you guys in the language that you prefer,'" he said.

He said the communities he's spoken to want trust.

Building that trust through a language and cultural lens, from beginning to end.

"Through registration and to getting that vaccination, you feel that this event was designed for you," Abente adds.

That's why some efforts are pivoting.

Casa de Salud is working with providers and health departments to aim at minority groups, such as the Latinx community.

Christopher Ave, Director of Communications for St. Louis County Department of Public Health, says its department has been partnered with Casa de Salud early on to learn, but to also build that trust in the community.

"We are moving away from mass vaccination events and moving toward targeted specific events, locations, for people in certain communities to get vaccines," Ave says.

Abente said instead of the mass vaccination events, targeted events will scale over weeks and months. He said if it's done well, it could cause a domino effect. Those with a good experience can tell others.

In St. Louis County, 22% of non-Hispanics are fully vaccinated compared to 20% Hispanics.

That's not the only disparity.

Back in July, the county released data about Hispanic people being disproportionately affected by the COVID-19 pandemic.

Compared to the overall St. Louis County population, Hispanics are three to five times more likely to test positive for the virus.

So it's important to put up a good fight, by handing them information that can help them do that.

"People want convenience and feel comfortable because they are already in that group that wanted to learn more about the vaccine, so in a sense, we are responding to those needs," Abente said.

Knowing the importance of this is Gabriela Ramirez-Arellano and Lourdes Treviño Bailon.

Both started STLJuntos. It's a way for people to ask questions and access information.

"A few days after the Governor shut down the state there was still nothing in Spanish (or any other language) to let people know what was happening," Ramirez-Arellano said. "We couldn’t wait any longer and translated and shared his letter right away and started to build a network to educate, inform and connect people to the resources needed."

Abente is hopeful to have a vaccination event on Cherokee Street. On Tuesday, he even spoke with St. Charles County Health Department about possible models on how to move forward.

"We are building a model that is applicable for different locations in the region," Abente said.

As far as the vaccine navigator, five more languages will be added, but there is no concrete date on when that will happen.

Those languages include Chinese, Korean, Portuguese, French and Russian.