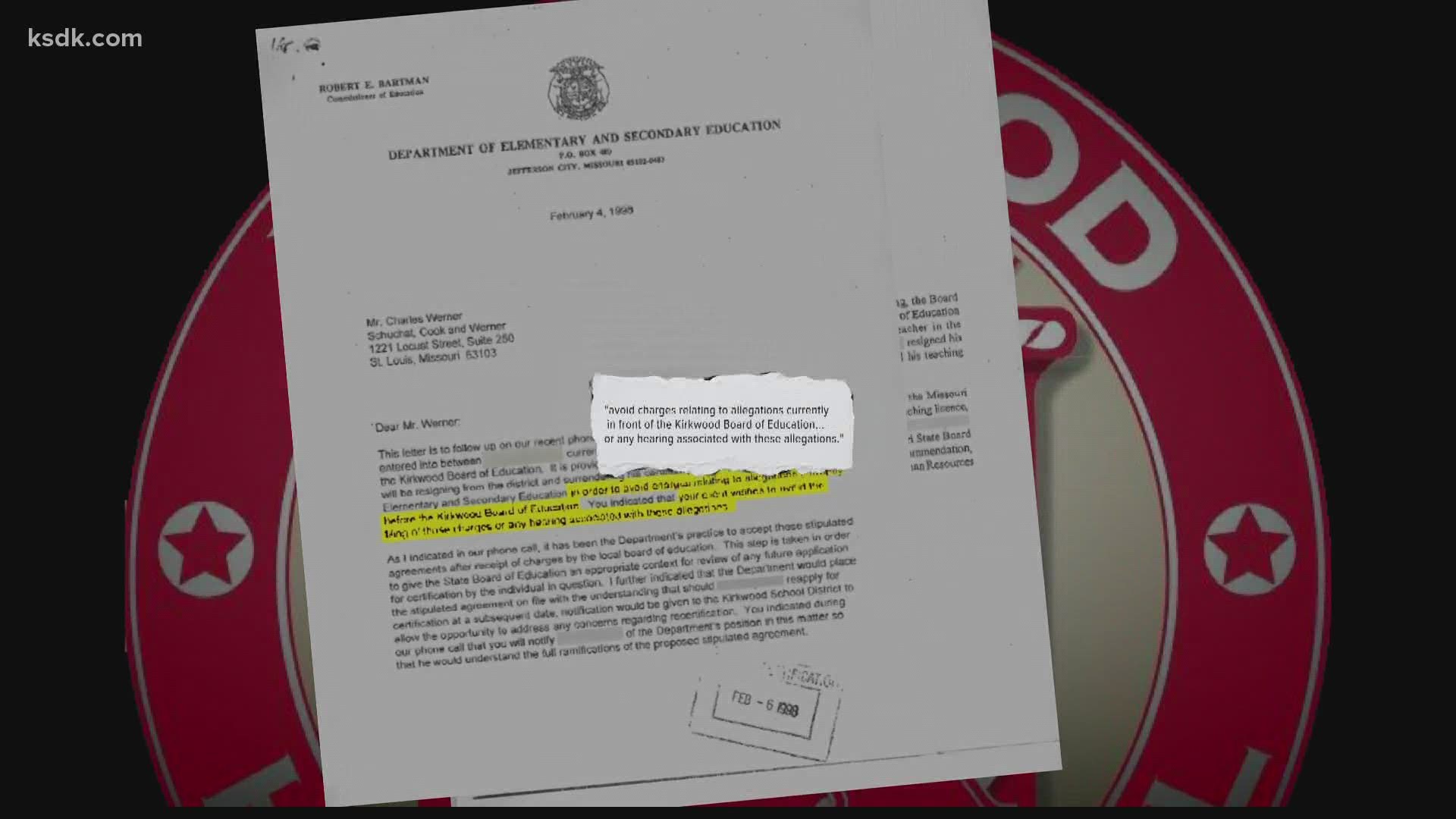 KIRKWOOD, Mo. — There are new developments in the case of several former Kirkwood High School students who say they were abused by teachers at the school.

The I-Team has learned Kirkwood police and St. Charles County prosecutors are now investigating at least two former Kirkwood teachers.The teachers have not been charged so we are not identifying them.

Hurster recalls several inappropriate interactions with the teacher. She says he would tell her he loved her and even kiss her in front of other students.

“We were backstage. The teacher, myself and two other girls. And he essentially said something like 'I'm just so proud of you' and kissed each of them on the mouth,” said Hurster.

Katie Papageorge was the first of his former students to come forward online with her account of abuse. She's one of at least a dozen former students who posted about abuse involving teachers and staff on the Kirkwood High School Alumni Facebook page.

Pappageorge says for several months she was sexually abused by the same teacher. At the time, she says she thought they were in love.

“Sexual activity would take place on campus. Some nights. he would take me to his house,” said Pappageorge.

Wilson would eventually report the teacher to then principal Franklin McCallie in December 1997. She had graduated, but became aware of several other students who she felt were being groomed by the teacher. One of those students was Pappageorge.

"I found a manila folder that was marked 'student writings'. It was all love letters, poems, talking about 'how great it was to see you last night'," said Wilson. All three women say their parents were never contacted by the district about the allegations. Nor it appears, were police contacted.

The I-Team found that teacher was able to negotiate the terms of his resignation with the district. We obtained letters between that teacher's attorney and the school district.

In the letters, he agreed to give up his K-12 teaching license. In exchange, he wanted all mention of the allegations taken out of his official file. In a letter between the district and the teacher's attorney, it stated he was leaving his position to "avoid charges relating to allegations currently in front of the Kirkwood board of education" and to "avoid the filing of those charges or any hearing associated with these allegations."

“They just cut a deal so that his reputation could be preserved his career could be preserved and the district could save face, and that's at the expense of sexual abuse survivors,” said Pappageorge. “I think it's really telling that this was a cover up. This was not something that they were forced into by the law.” “I think they were just like 'this is tidy. He won't be able to teach kids anymore and we'll just call it a day',” said Hurster.

“The people who were charged with protecting, educating, keeping children safe failed to do so.” After leaving Kirkwood, the teacher went on to work at a local community college.

Last year, Pappageorge, Hurster and Wilson contacted that community college and the police about the allegations buried in his Kirkwood file.

Wilson says after she saw he had begun taking students overseas on college sponsored trips, she felt she had to speak up once again.
He resigned from the college shortly after.

Now a year later, prosecutors have launched their own investigation.

“It's very encouraging. I'm really glad to hear that it's going forward.
I know enough about reporting sexual abuse that I think this is atypical. I think getting some attention on my case and getting some movement on a 20 plus year old case is very unusual.”

A spokesperson for the St. Charles County Prosecutor’s Office sent us the following statement:

“At this point this case is still an active investigation and we hope it will be wrapped up by next week.”

In response to questions about why the district didn't report the allegations to police, and why the accused teacher was allowed to resign, they sent us the following statement:

“The current district administrators were not employed in the Kirkwood School District in 1998; therefore, we cannot speak to specifics of decisions made at that time. State and federal laws and guidelines have changed significantly since 1998, including the passage of the Amy Hestir student protection act in Missouri.”

Carol Hotze Hermann, graduate of the class of 1985, says she’s also been in touch with investigators. She recently recounted to the I-Team how she was raped by a Kirkwood teacher in the 1980s.

Her alleged abuser went on to teach children at a local private school.
That school recently launched their own investigation and contacted police. The school would not return our request for comment on this matter. However, that teacher’s name is no longer on the school's website.

The Kirkwood School District is launching an independent investigation into the reporting and handling of sexual abuse allegations. A firm has been chosen to handle the investigation. That announcement will be made at the Aug. 31 board of education meeting.

“As previously stated, KSD is seeking an independent assessment and investigation of the culture and climate within our schools and the district related to the reporting and handling of allegations of sexual abuse, misconduct, and inappropriate behavior. A request for proposals was posted last month. A recommendation will be made at the Aug. 31 board of education meeting."