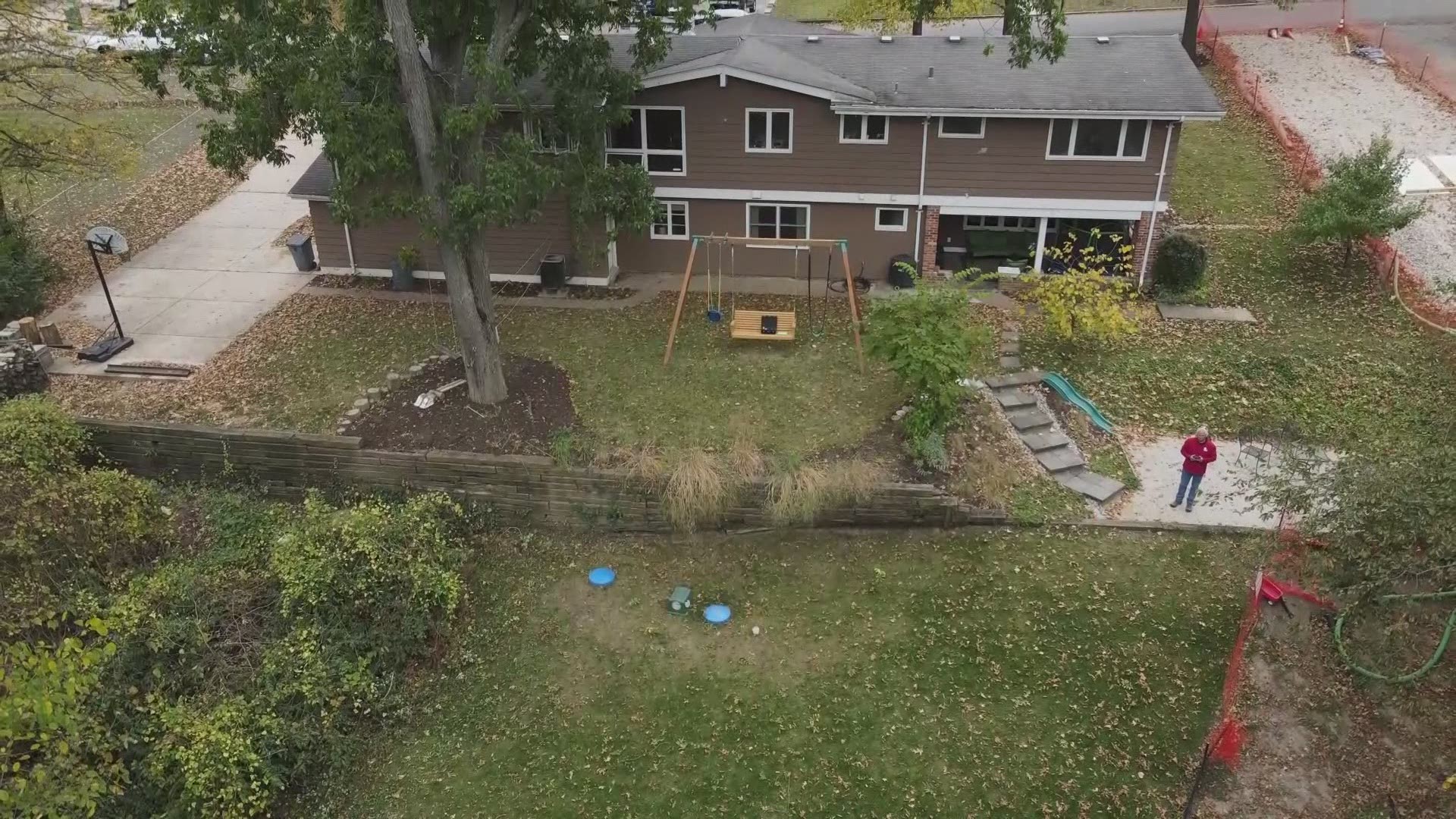 FENTON, Mo. — Kim and Richard Rankin raised seven children in their Fenton home. With a big family, a big backyard with an inviting tree house helps a lot. In 2008, it became a toxic burden. That was the year they found out that yard was a Superfund site.

“The lead levels weren't high enough to be a danger to us and the children in the home,” Richard Rankin said. “But we adopted our son in 2013 and at that point he was 8 months old. So, I called the [Environmental Protection Agency] and they immediately said they would put us at the top of the list for that remediation cleanup project.”

Seven years later, the Rankins are still on the top of the list. Nathan is now an active child with complex medical needs and the Superfund site is still there.

“Our little guy that we adopted has never really explored his full yard,” Kim said. “He never will get to play in the tree house," Richard added.

That year, the family put in a septic tank. The contractor brought soil to fill in the yard. Years later, the Rankin family learned that the soil was contaminated with lead, which is present across much of southwest Jefferson County in connection with mining operations across the Old Lead Belt.

“In 2008, the EPA sent us a letter stating that they had found our name on the list from a particular provider of soil and that it was very likely that we'd had contaminated soil brought into this site,” Richard said.

The EPA says heavy metals in mine waste from operations as far back as the 1700s have made their way into the soil and water all over Jefferson County. One of the biggest sources of contamination was carried by water on the Big River. Development in the region meant soil was transported from rural areas to family homes like the Rankins'.

The resulting contamination brought heavy metals like lead, arsenic and chromium to the doorsteps of Jefferson County homeowners.

“It's these repetitive exposures, especially in younger children that can lead to affect their development,” said Julie Weber, director of the Missouri Poison Center at SSM Cardinal Glennon Children’s Hospital. The contamination can have lasting effects, she added, “on the blood system, how they develop and can affect their IQ.”

In 2009, authorities added the Southwest Jefferson County Mining Site to the National Priorities List for the “most serious contamination problems and greatest threats to human health and the environment.”

The EPA has sampled more than 4,700 residential and child care properties for soil lead levels. Out of those, more than a third qualified for remediation. So far, the agency says it has finished remediating more than 1,000 of them. That usually means removing around six inches of soil from the area and replacing it with clean soil.

It took six years for the EPA to contract with Environmental Restoration, LLC, to clean up the Rankins' property. When they started, the plan changed.

“They just wanted to cap the land and put 12 inches of dirt on top of it, instead of removing it,” Kim said. “Once they thought they had the job done, it turned out that it failed.”

The Rankins say the property is now in worse shape than it was before. The lead contamination remains, and the family is without a working septic system.

“They crashed two tractors into the tree house and damaged it. And at this point, it looks like we'll have to take it down,” Richard Rankin said.

“It really has felt like us as a private citizen against these bigger power government and corporations, that you just can't motivate much change,” Kim said.

The I-Team reached out to Environmental Restoration LLC about what went wrong. They have not yet sent a response.

The company is getting a second chance on the project, because the EPA gave them the contract to finish the job they were hired and paid to do last year. Round two of remediation is about to start.

“They just had total disregard to the consequences that they had left us with for so long,” Kim said. “And it has just become a tremendous amount of work for us to advocate. Hours spent writing e-mails, hours in meetings. It's kind of like they came in with the idea that they were helping. And it has been anything but helpful.”

The EPA sent the following statement in response to the I-Team’s questions:

"In 2018, EPA Region 7 competitively awarded an Emergency and Rapid Response Services (ERRS) indefinite delivery, indefinite quantity (IDIQ) contract to Environmental Restoration (EPA’s contractor) with a term of 1 year, plus 4 government option years. The same year, EPA issued an ERRS task order under the contract to address lead contaminated properties in Jefferson County as part of on-going lead cleanup work occurring throughout the county. A government shutdown, inclement weather events, and other delays, resulted in remediation work on the subject property beginning in August of 2019. EPA’s contractor completed the remediation of the property in September 2019 by placing cover soils over the lead contaminated soils. Work on property restoration remains to be completed. The lead remediation actions taken by the EPA contractor are protective to the family while the remaining restoration work on the property is being completed.

"The area requiring restoration work is located on a steep grade with limited access for equipment and includes an engineered septic system. In September 2019, the EPA contractor hired a septic system sub-contractor to reinstall the drain field portion of the septic system in the cover soils.

"The owner later reported saturation in the new septic field, and, in November 2019, a county inspector noted the system was failing and did not pass code. Multiple tests and inspections were performed and troubleshooting for possible issues began. Due to the complexities of the septic system and winter weather setting in, the EPA postponed additional work on the system. In February 2020, a meeting with the property owners, a third-party septic installer and EPA’s contractor occurred to attempt to resolve the issues. EPA determined that additional input from the county was required and that a licensed septic engineer would be called in to sample the soils and determine compatibility with the system. However, the COVID-19 pandemic resulted in continued work postponement until August 2020.

"In August 2020, a soils engineer collected samples and determined that the soil types within the drainage field were not compatible with the system design. EPA then began exploring options for acceptable solutions with the property owner, arriving at a mutually agreed solution to connect the residence to a nearby public sewer district. The parties agreed this would be the best path forward, rather than replacing the failing septic system. Currently, work on surveying the properties for easements and developing the design is underway. Once the easements and design are accepted and approved by the relevant property owners and sewer district, EPA will hire a contractor to connect to the sewer district at no cost to the homeowner. The EPA also will present a plan for addressing the grading concerns and removing the old septic system to the family for their review, comment and approval. Given the time of year and general inability to perform earthwork in the winter, it is likely that the remaining work will be completed next spring.

"EPA maintains frequent and open communication with the family as we work to complete restoration of their property."

In the most recent update on the EPA website, the Southwest Jefferson County Mining Site is categorized as “Current Human Exposure Not Under Control.” The agency provides bottled water to 55 homes and expects that there are thousands more properties to test and at least 600 more properties to remediate.

Health officials recommend that Jefferson County residents, especially children, get their blood lead levels checked at least once a year.