'Somebody knows something': Victim's family reacts to renewed push to find I-70 serial killer

A new detective is assigned to work the unsolved 1992 murder of Nancy Kitzmiller, which was linked to five other killings across three states 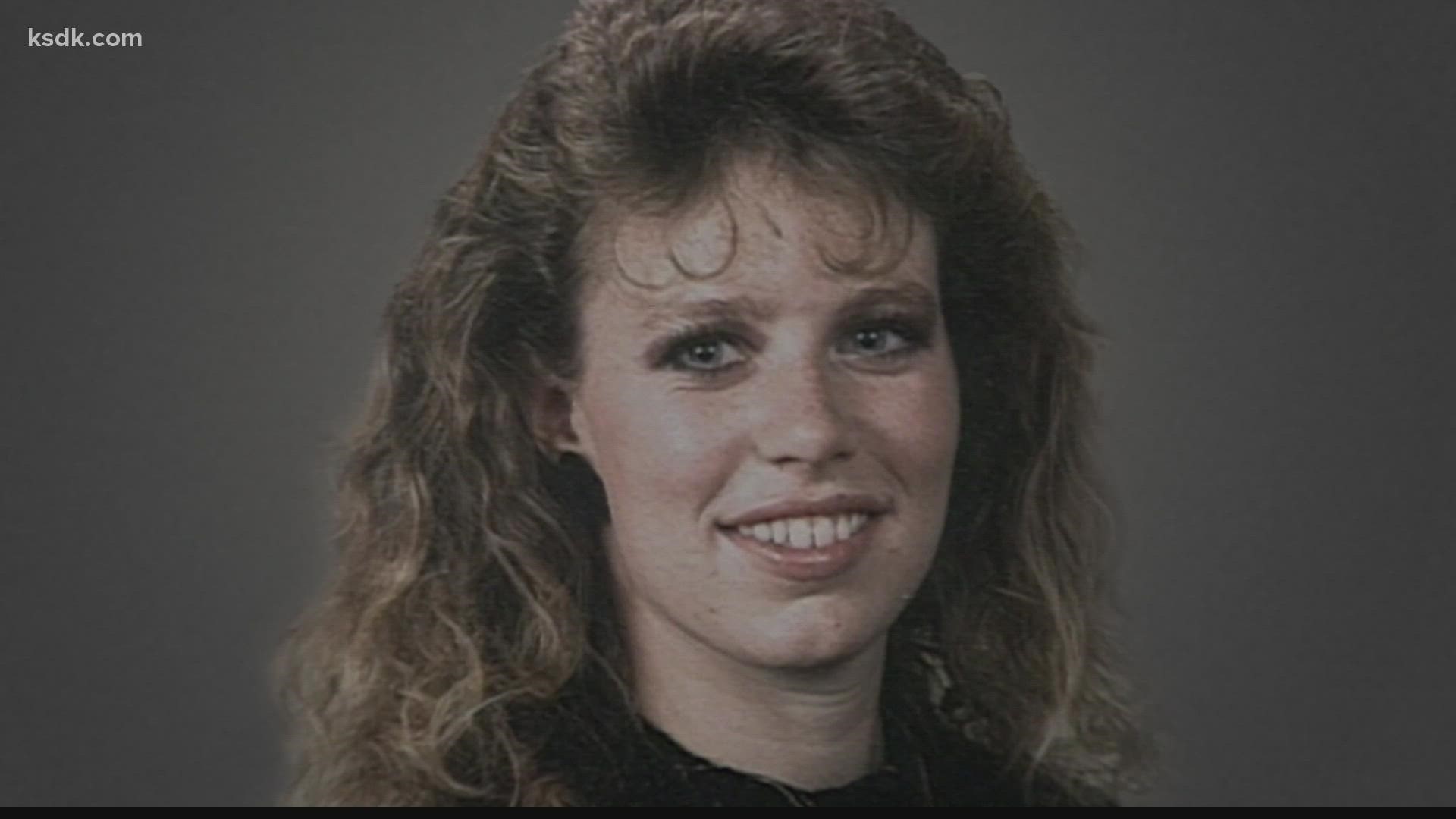 ST CHARLES, Mo. — Don and Carol Kitzmiller looked at the posters hanging on a wall inside the St. Charles Police Department and refused to sit underneath them.

“Those words do not represent how we feel,” Carol Kitzmiller said as she prepared for an interview with the I-Team about her daughter’s cold case.

For 29 years, the Kitzmillers have been waiting to learn the identity of the serial killer who police believe killed their 24-year-old daughter and five others across three states.

Now, the St. Charles Police Department is putting a new detective on the case and hosting a two-day conference Tuesday and Wednesday with all of the police departments with cold cases attached to the so-called Interstate 70 killer. Detectives will share case notes and evidence to determine whether new forensic techniques combined with institutional knowledge and fresh eyes could help crack the case.

They already have new evidence: an age-enhanced version of a sketch of the suspect.

“That's what the victim deserves,” he added.

The fresh set of eyes on the case is Detective Kelly Rhodes. After the meeting, investigating the case will be her sole responsibility for a year.

Standing inside a college dormitory-sized evidence room at her department, she said she feels confident. Hundreds of file folders filling two cabinets as big full-sized mattresses contain the names of dozens of potential suspects.

“I’m confident his name is somewhere in here,” she said.

She believes she knows his motive based on the detective work that has come before her. It shows the most the killer got away with at any of the scenes was about $100.

“He was homicidal,” she said.

The killings along I-70

For a 29-day span in the spring of 1992, mostly petite brunette women were being shot to death inside small retail stores in strip malls along Interstate 70. They were shot in the back of their heads. Police linked them to the same unusual gun.

One of the victims was a man who police believe the killer mistook for a woman because of his long brown hair.

An eyewitness who encountered the killer helped create a sketch and described the man as white, between 5-feet-7-inches and 5-feet-9-inches tall, slender build with dull red or strawberry blond hair between 22 and 32 years old.

Back then, St. Charles investigators created files on men who matched that description who had been released from prison around that time.

They made files on every man who had stayed at a hotel along the route.

And files on every license plate of every car that had been stopped by police along the Interstate within that fateful time frame.

Rhodes’ Captain Ray Floyd said the work those detectives did could pay off should they get a name through forensic evidence, by tracking the killer’s movements.

“They've laid a foundation that makes this a possibility that we can solve,” he said.

Floyd said one of the key pieces of evidence that connected the killings was the murder weapon: an Erma Werke Model ET22 pistol.

It’s a somewhat rare gun as there were only about 6,500 made and imported from Germany, Floyd said. It has a nearly foot-long barrel.

“Not a very usual weapon of choice because it’s not very easily concealable,” Rhodes said.

In 2014, the St. Charles Police Department bought an Erma Werke Model ET22 pistol from an online auction and have stored it with the evidence in the case.

It’s so rare that ballistics experts plan to test-fire that gun to ensure it’s not the actual murder weapon, Floyd said.

Nancy Kitzmiller’s parents say she was their oldest child. She spent the first 10 years of her life in Oklahoma and returned there for college. She played soccer at Fort Zumwalt North High School and then for Oklahoma State.

As a child, she had a fascination with maps.

“She loved cartography,” her mother recalled.

And she loved horses.

In May of 1992, she was weeks away from passing a background check for the Defense Mapping Agency – now known as the National Geospatial Agency.

She planned to turn her fascination with maps into a career.

To make ends meet in the meantime, she worked as a manager at a store called Boot Village along Interstate 70 and Zumbehl Road.

The Kitzmillers realize they aren’t the only ones who struggle to find the words on those posters where they recalled memories of their daughter.

“We're not the only family in this,” Carol Kitzmiller said. “There's families all over the place.”

The following is a summary of the other cases connected to the killer:

Through the years, there’s been talk that the killer started targeting women in Texas, too.

Investigators there haven’t been so convinced as the gun used in those crimes did not match the one used in the Midwest killings.

But the mode of operation was similar.

Rhodes had a lead to track down from the case that came in just weeks ago – someone calling to say they believed one of their family members looked like the killer’s sketch.

“At this point, I would say that we need to reexamine everything,” she said. “I don't think there's anything that is off the table.”

The Kitzmillers believe police will identify their daughter’s killer this time around.

Too much has changed in the way of forensic science. Too much time has passed. Somebody has got to know something.

“Nancy was a very good person,” Don Kitzmiller said. “She didn't deserve this.

“Somebody out there knows,” he said, trailing off. “And they need to step up.”

How the Kitzmillers will feel should they finally learn the killer’s name is unknown.

“We've had all this hope over the years, and so I don't know what this is going to bring,” Carol Kitzmiller said.

Her husband struggled with the answer, too.

“It doesn’t change anything, does it?” he said.

And they remained on the opposite side of the room – away from the wall where the posters hung.