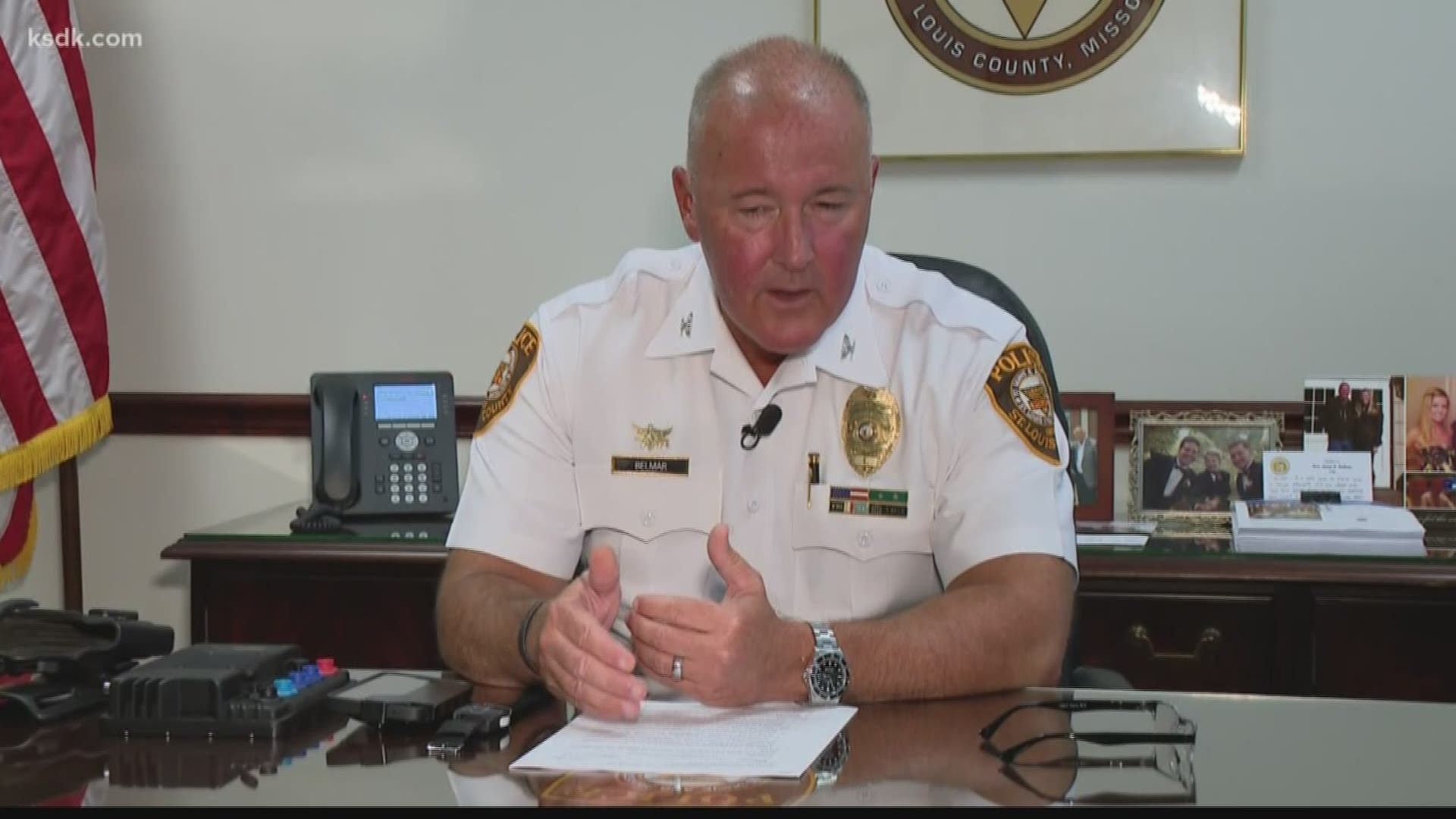 “It has been an honor to work with and for the women and men of the St. Louis County Police Department," Belmar said in a news release. "The dedication, sacrifice, and bravery of those that work for this Department is unmatched.

"The citizens and businesses of St. Louis County deserve nothing but the best, and I firmly believe they receive that from us every day.”

Belmar's retirement will take effect on April 30. He took over as chief in February 2014 and has been with the department for 34 years.

The St. Louis County Police Board of Commissioners will determine who will succeed Belmar. Its chairman, William Ray Price Jr., said Monday that Belmar emailed him about his resignation.

When asked if Belmar was forced out, he responded: "Not by the police board." 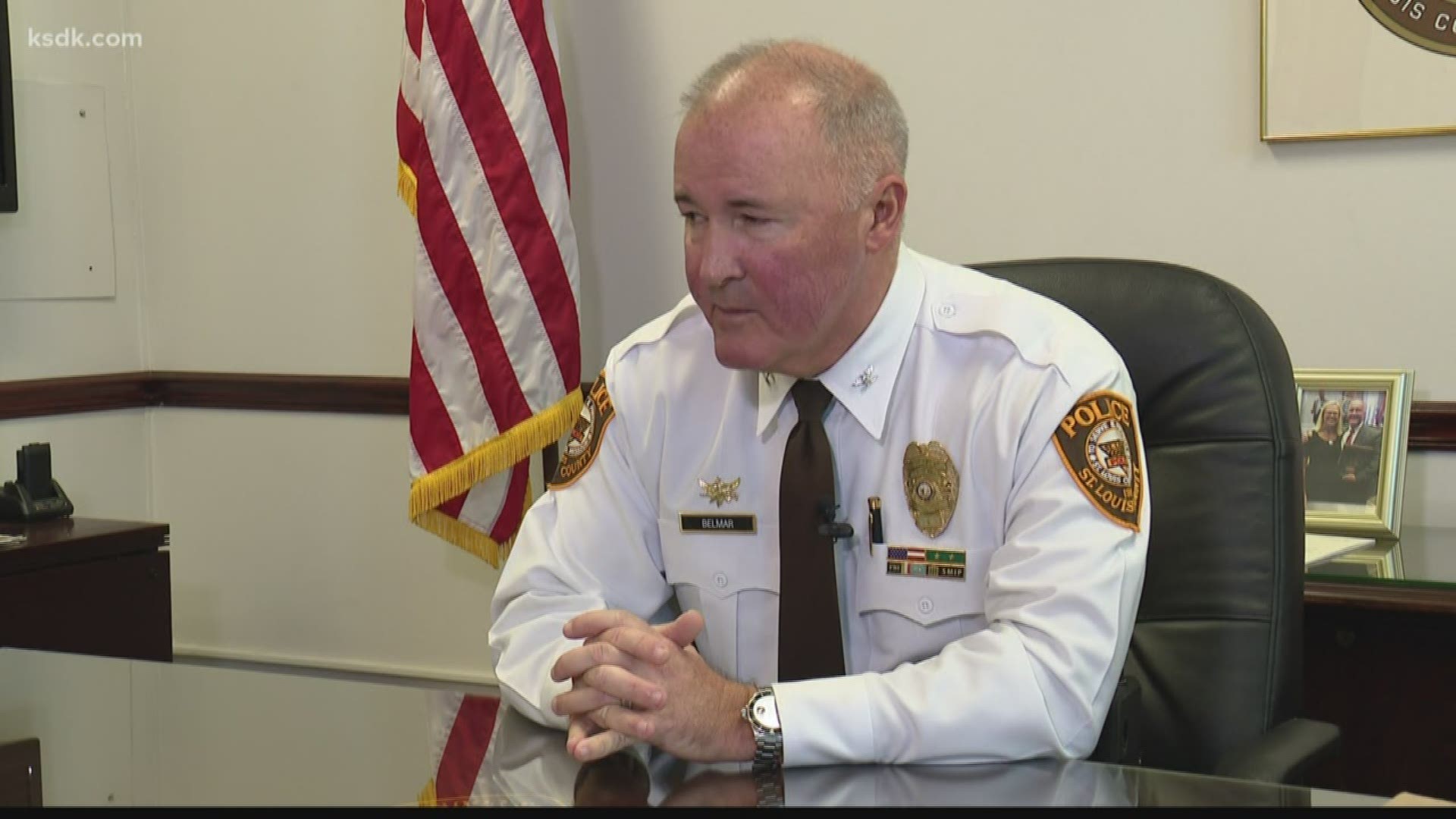 Belmar has refused to comment on his retirement beyond his prepared remarks, but department spokesman Sgt. Benjamin Granda said Belmar might be willing to do so closer to his retirement date.

Granda did not say whether Belmar, 56, will be retiring or accepting another position elsewhere.

Price said Belmar did not indicate whether he has a new job. Price has only been on the board since November. St. Louis County Executive Sam Page appointed him just weeks after a jury awarded a police lieutenant $20 million after he claimed he was passed over for promotions because he is gay.

Price said Monday the board will meet within the next week to discuss how it will begin the selection process, but he knows what he's looking for in the next chief.

"I’m looking for an excellent law enforcement officer who will serve and protect the people of St. Louis County, someone with honesty, integrity and who values inclusiveness and diversity in the department and with their contacts outside the department," he said.

“He took over a department during difficult times,” Page wrote. “During his tenure, he created the Diversity and Inclusion Unit and obtained voter approval of Prop P, allowing (sic) police officers the raises they deserved. Thank you for your service.”

Page issued a longer statement later, which said Belmar told him he "was considering retiring in 2020."

It also referenced the recent $20 million jury verdict in favor of Keith Wildhaber, now a police lieutenant who said Belmar's administration had refused to promote him because he is gay.

"I have said all along that change begins at the top and it did, with my appointment of four new members to the five-member police board," Page said. "I encouraged Chief Belmar to lead the police department through the transition and he has. That included creating a new Diversity and Inclusion unit, promoting Keith Wildhaber to lieutenant and having Keith oversee the new unit."

The St. Louis County Police Association issued a statement in response to Belmar's retirement and did not comment on Belmar's tenure or impending departure.

"The Police Association looks forward to continuing to advocate for our members with the next police chief. We feel strongly that the person is already wearing the St. Louis County Police uniform."

In his statement, Page also said Belmar's career had been "long and accomplished."

Belmar's predecessor, Tim Fitch, who is now a county councilman, echoed those thoughts.

"The vast majority of his police career has been nothing but extraordinary, but I think every police chief has highs and lows during their administration and he has certainly had those," Fitch said. "Certainly the latest incident with Wildhaber would be one of those lows.

"I wish him the best. I don’t know what he’s planning to do next, but he's got a lot of life to live and I'm happy he’s made the decision to enjoy that with his family."

St. Louis County Prosecuting Attorney Wesley Bell said he was "surprised" by the announcement, and said he hoped the "accommodating and helpful" relationship his office has had with Belmar will continue during the next administration.

"I appreciate his openness to change...I hope the next person that comes into this office continues to share that characteristic," Bell said.

Dr. Laurie Punch, another new member of the St. Louis County Board of Police Commissioners said, "I am appreciative of Chief Belmar’s service to the Department.  Along with the other board members, I will be working with the chief and department to assure a coordinated transition of leadership and appreciate his commitment to our county. I am hopeful."

"Chief Belmar has been a close partner in crime-fighting with me over the past couple of years," Hayden wrote on Twitter. "He has certainly been there for me personally and professionally, as I have matured in my role as Police Chief for the City. I wish Jon the best."

Page did not address whether he believes the next chief should be an internal or external candidate -- a decision the Police Board of Commissioners must make. The county charter allows police board members to appoint an external candidate, as well as designate which rank a candidate must be to apply.

The department has previously had external candidates serve as chief. Ron Battelle became its first chief who rose through the ranks when he was appointed in 1990.

When Belmar was appointed to the position, the police board opened the application process to those with the rank of captain and above.

Page said in his statement that he has "already begun discussing future leadership with members of the police board," and added that he looks forward to "working with them as the next police chief is chosen."

"The process of changing the Police Department’s leadership will be thoughtful and orderly ... This is an opportunity for an open dialogue about the future of the police department. I am confident that future will be built on a strong foundation that already exists."

About nine months into Belmar's tenure as chief, riots and protests erupted in Ferguson following a controversial police shooting there. Belmar was widely criticized for how heavy-handed his department handled the protesters, including its use of police dogs as well as snipers atop large armored vehicles pointing their rifles at protesters during the daytime. Belmar said at the time that they were using the scopes on their rifles as “binoculars,” but he said he realized the “optics” were not good.

Then Missouri Governor Jay Nixon stripped Belmar of his command of the protests and put the Missouri Highway Patrol in charge.

During community meetings, people frequently spoke of their support for Belmar’s handling of the protests.

Belmar again took heavy criticism after writing a letter to a federal judge in support of a drug dealer his department investigated. The drug dealer was the nephew of a police board member, and close ally of then County Executive Steve Stenger. Stenger also wrote a letter to the judge supporting the man.

The St. Louis County Police Board of Commissioners gave Belmar a written reprimand for sending the letter – the first time in the department’s history that a chief had been reprimanded.

Chairman of the Board of Police Commissioners, Ray Price, wrote: “On behalf of the Board of Police Commissioners, I would like to thank Chief Belmar for his 34 years of service to the citizens of St. Louis County. Because of his work, and the work of all the other members of the department, the St. Louis County Police Department is one of the finest police departments in the country.”

One of Belmar's biggest accomplishments was garnering support for the passage of Prop P, a sales tax increase voters approved in 2017 to raise money for public safety costs. The $50 million fund brought raises as high as $10,000 for some officers.

A press release from the police department also noted that Belmar led the department through the line of duty death of Officer Blake Snyder, who was shot to death in 2016 by an 18-year-old man involved in a domestic disturbance.

But he has again come under scrutiny following a $20 million jury verdict in favor of a gay police lieutenant who alleged he had been passed over for promotions during Belmar’s administration because he is gay. During the trial, police commanders had inconsistent statements and Prosecuting Attorney Wesley Bell announced he launched a perjury investigation.

Since the verdict, Page replaced four of the five members of the Police Board of Commissioners – the entity in charge of hiring and firing the police chief. But he also told a group of business leaders gathered for a police fundraiser days after the verdict that Belmar is, “a leader, not a quitter.”

5 On Your Side's Justina Coronel contributed to this report.