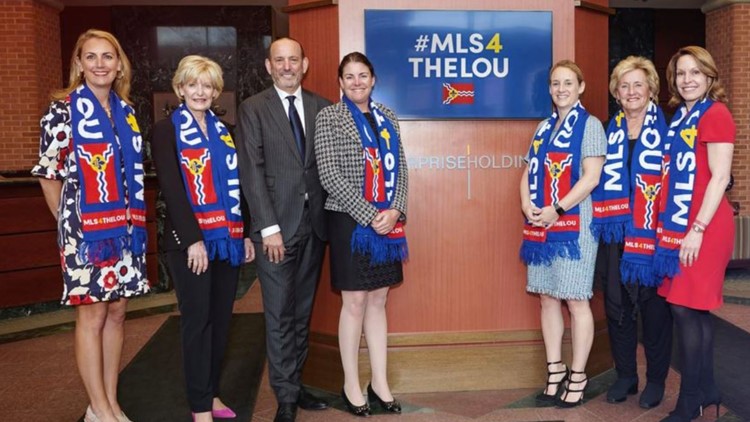 Photo by: #MLS4THELOU.
Major League Soccer Commissioner Don Garber visited the St. Louis headquarters of Enterprise Holdings on Monday where members of the Taylor family made their case for why a MLS franchise would be benefit St. Louis. Carolyn Kindle Betz (far left), president of the Enterprise Holdings Foundation, is leader of the prospective ownership group, #MLS4THELOU.

Don Garber hears from the Taylor family and a roundtable of business leaders making the case for how a MLS franchise would benefit the region
Author: By Nathan Rubbelke – Reporter (St. Louis Business Journal)
Published: 11:38 AM CDT March 12, 2019
Updated: 11:39 AM CDT March 12, 2019

"It was one of the best showings of corporate C-level executives in all of the time we’ve been going through this expansion process,” Garber said in a video statement distributed by #MLS4THELOU.

Owners of the MLS team would be the Jim Kavanaugh and Taylor families, including seven female members of the Taylor family as well Andy Taylor. Kavanaugh is CEO of World Wide Technology. The group would be the first in the league’s history to be majority-owned by women.

“We’re incredibly pleased with how today’s visit went,” Kindle Betz said in a statement. “I know we put our best foot forward by demonstrating our strong commitment to securing a team for St. Louis as we were able to show Commissioner Garber some of the enthusiasm the local business community has to financially support a MLS team.”