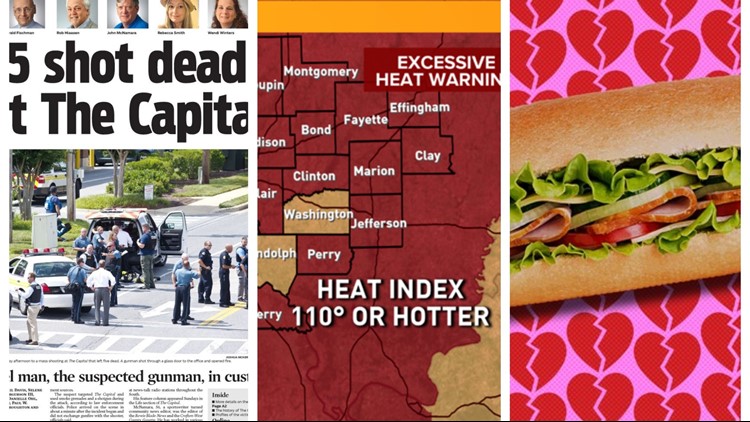 Five newspaper employees were killed... at the Capital Gazette in Annapolis, Md., on Thursday afternoon as a result of what police call a targeted shooting. Jarrod Ramos, the 38-year-old gunman who had a long and public feud with the newspaper dating back to 2011, was found hiding under a desk prior to being placed into custody. He has since been charged with five counts of first-degree murder. Our condolences are with the family, friends, and co-workers of the Capital Gazette.

If you don't feel the heat now... you will this weekend. Beginning Friday morning, the St. Louis region will be under an Excessive Heat Warning, with heat indices reaching upwards of 110 degrees. As if the constant raining and storming weren't enough, now we have to deal with the unforgiving heat? Please, weather gods, can you let us have an easy week? Just once this summer? Oh, right — it's only June. Obviously though, please stay safe this weekend.

You could say size matters... when it comes to public reaction. That's what ended a 'penis size' study at Missouri State University. Professor Alicia Walker had asked her male students for photos of their genitalia as part of a study on male self-esteem — but, due to a persistent, and controversial reaction, that project has since been canned. Walker originally requested at least 3,600 different "clinical" photos for measurement data.

Jimmy Johns helps catch a cheating boyfriend in the act — While the gesture is obviously sweet, maybe people should, you know, not cheat on their significant others in the first place. Crazy!

'Oh, God': Melania Trump reacts to photo of migrant boy left alone in desert — The child carried a note on him, which in English, translated to: "I am looking for my mother."