The prime time special will air May 12 on KSDK, featuring Joe Buck and several other celebrities with ties to the St. Louis area

ST. LOUIS — A star-studded hour-long program will soon air, thanking the people on the frontline who are sacrificing so much to keep all of us safe. The program, called “Rise Up For Heroes,” is hosted by Joe Buck and will air at 9 p.m. Tuesday, May 12 on 5 On Your Side.  The prime special will also feature celebrities with ties to our region including Bob Costas, Cedric the Entertainer, Michael McDonald, Ozzie Smith and Ellie Kemper.

“We are proud to be associated with the ‘Rise Up For Heroes’ project. The campaign’s characteristics and values complement those of 5 On Your Side – celebrating our frontline heroes who make St. Louis such a remarkable place to live and work,” said 5 On Your Side President and General Manager Alicia Elsner.

The show is an extension of the grassroots “Rise Up For Heroes” campaign, stewarded by local entrepreneur Keith Alper, CEO of Nitrous Effect, the production company behind the program.

"We’re excited to expand the Rise Up For Heroes initiative with this TV Special. The show will feature some of St. Louis' biggest celebrities and is a way for the business and sports community to rise up and thank the thousands of workers and essential employees on the front lines,” said Alper. “From nurses to grocery store workers to postal workers, and everyone in between, these are the heroes putting their lives on the line every day.”

“Rise Up For Heroes” aims to encourage the St. Louis community to rise up and give thanks to frontline workers, and to encourage giving back to by donating to the COVID-19 relief fund, or through blood or food drives.

“The Cardinals are proud to join the St. Louis Blues and KSDK in this effort to celebrate the heroic efforts of the frontline workers who are keeping us healthy, safe and fed during this difficult time,” said Bill DeWitt III, Team President, St. Louis Cardinals. “We encourage our fans to continue to join us in this initiative to show our appreciation for these heroes.”

“We are thrilled that the Rise Up For Heroes initiative has been able to add the planned hour long television special and star studded cast to salute our region’s frontline workers,” said Chris Zimmerman, President and CEO of Business Operations for the St. Louis Blues. “What a great platform for the Blues, Cardinals and many of our region’s biggest names to turn the camera and spotlight on the exceptional efforts of the true heroes of the fight against COVID-19.”

“Rise Up For Heroes” began as a grassroots project with the Cardinals and Blues, spearheaded by Alper, to encourage the St. Louis community to show gratitude for frontline workers each night at 7 p.m. It kicked off with several caravans featuring Fredbird, Louie, and players from both teams, ending each night at one of the member hospitals of the regional COVID-19 task force.

“We hope to inspire the entire St. Louis region to rise,” said Alper. “Whether it’s banging pots or clapping and cheering, we want to hear St. Louis make noise for these inspiring people in our community.” 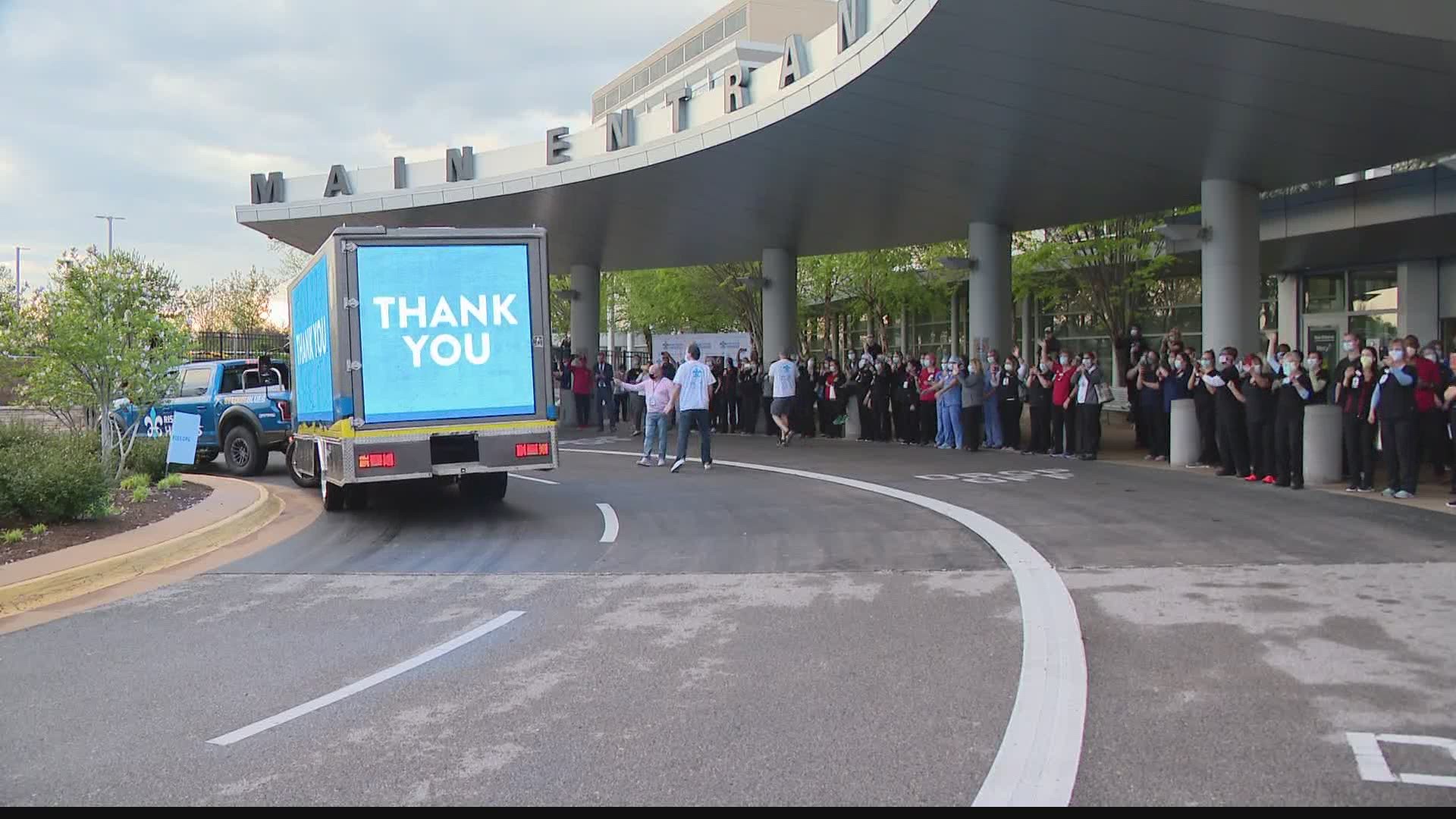