The rally kicked off around noon with hundreds of people. Some protesters used chalk to cross out the word "saint" and write what the statue means to them 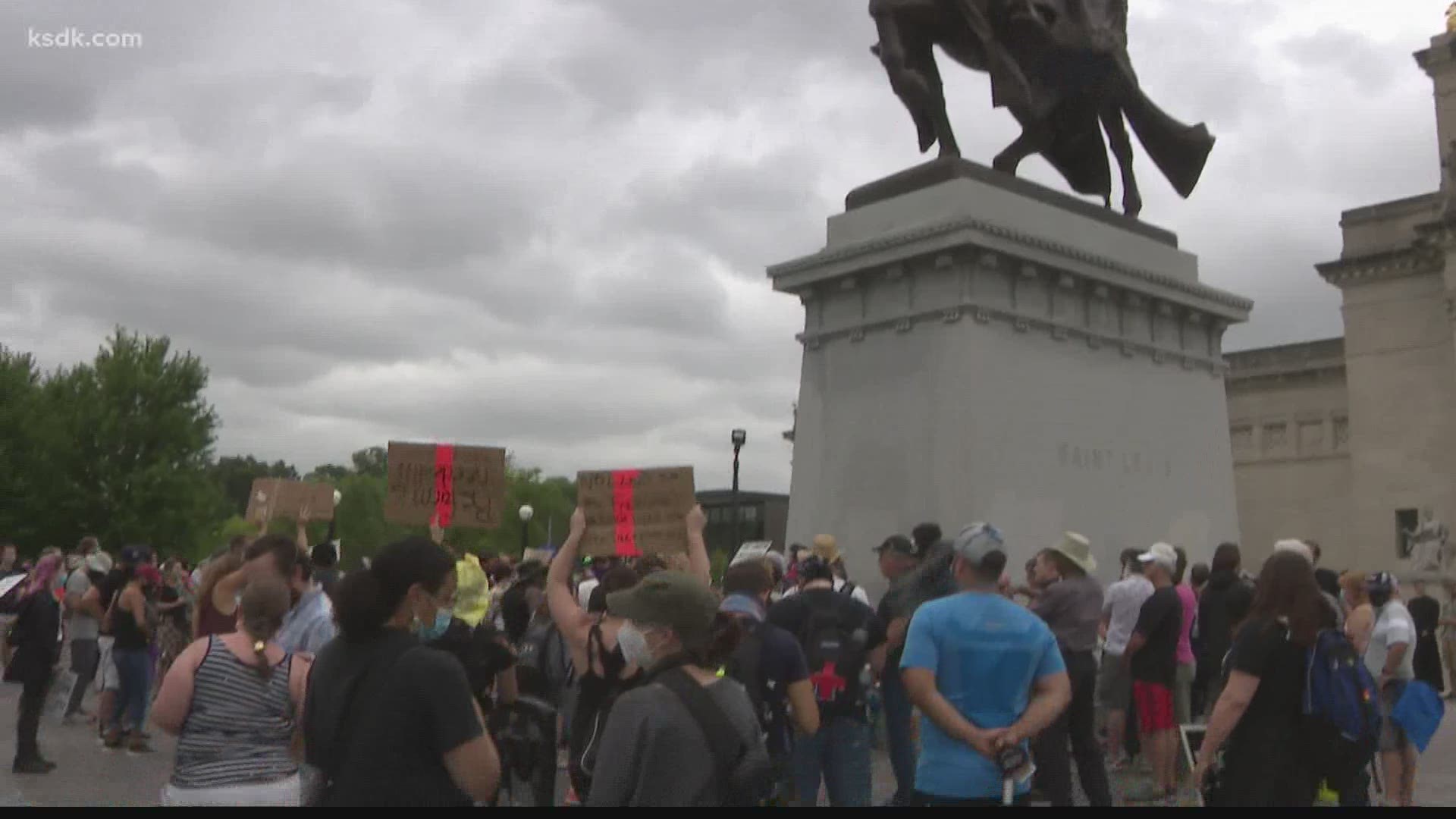 ST. LOUIS — At the peak of Art Hill, a statue of St. Louis' namesake sits high. Saturday, at least two groups rallied around the statue of King Louis IX in protest.

One group calling for its removal, the other in defense.

"We don't need for our children and our citizens to leave the art museum and be assaulted by the statue of King Louis IX… this man represented hate and were trying to move in the spirit of black lives matter," said Umar Lee, the organizer of a petition to get the statue removed.

The others praying for Saint Louis to stay.

"I'm here to support King Louis IX. He deserves a statue and the city should be named after him," one protester said.

"It's coming down no matter how much y'all pray," said another.

The rally kicked off around noon with hundreds of people. Some protesters used chalk to cross out the word "saint" and write what the statue means to them.

"If you wanna be a just city you can't be named after a racist and anti-semite, an islamophobe… what does that say to our Jewish, our Muslim, our black citizens of St. Louis," Lee said.

But some in attendance said those against the statue are missing the point.

RELATED: So, how did St. Louis get its name anyways?

"They try to look at history through modern day eyes, history cannot be viewed that way. History must be viewed within the context of the time that it occurred," Cook said,

Mayor Lyda Krewson is also against the statue's removal.

"I think it's a distraction to a lot of hard work that we all need to do," Krewson said.

"Whether Lyda Krewson likes it or not, it's coming down. so I'm going to ask the city, 'you wanna do this the easy way, or you want to do this the hard way?' Because that is coming down," Lee said.

So far, a formal petition to get the statue taken down has more than 700 signatures.

The Archdiocese of St. Louis released a statement Sunday regarding the call to remove the statue:

"The history of the statue of St. Louis, the King is one founded in piety and reverence before God, and for non-believers, respect for one’s neighbor. The reforms that St. Louis implemented in French government focused on impartial justice, protecting the rights of his subjects, steep penalties for royal officials abusing power, and a series of initiatives to help the poor.

"King Louis IX’s renowned work in charity helped elevate him to Sainthood. His daily suppers were shared with numerous beggars, whom he invited to the royal table. On many evenings, he would not let them leave before he washed their feet. He personally paid to feed more than 100 poor Parisians every day. His care for the sick was equally moving; St. Louis frequently ministered to lepers. He also created a number of hospitals, including one for the blind and another for ex-prostitutes.

"For Catholics, St. Louis is an example of an imperfect man who strived to live a life modeled after the life of Jesus Christ. For St. Louisans, he is a model for how we should care for our fellow citizen, and a namesake with whom we should be proud to identify. The sword on his statue is not raised for warfare, but rather is held with the blade down—a symbol of peace. In his recent statement on Racism, Justice and Peace, Archbishop Carlson said, in part:

"'…Scripture tells us to turn our swords into plow shares. Let us turn our guns into metal. May that metal someday be the statue in our community that stands as a reminder that here, in the Greater St. Louis Region, we chose justice so that there would be peace…'

Apostolic Administrator for the Archdiocese of St. Louis

"The Archdiocese of St. Louis is encouraged by the winds of change that are at hand, but believes that this energy of change should be focused on programs and policies that will dismantle racism and create a more equal society for all races and religions. As Catholics, we believe that each person—no matter their race, religion, background or belief—is created in the image and likeness of God. As such, all should be treated with love, respect and dignity. We should not seek to erase history, but recognize and learn from it, while working to create new opportunities for our brothers and sisters."

RELATED: Here's why Columbus and Confederate statues went up in the first place