The big, bold yellow and white letters were painted on Tucker, right outside city hall where protesters have been gathering since Wednesday 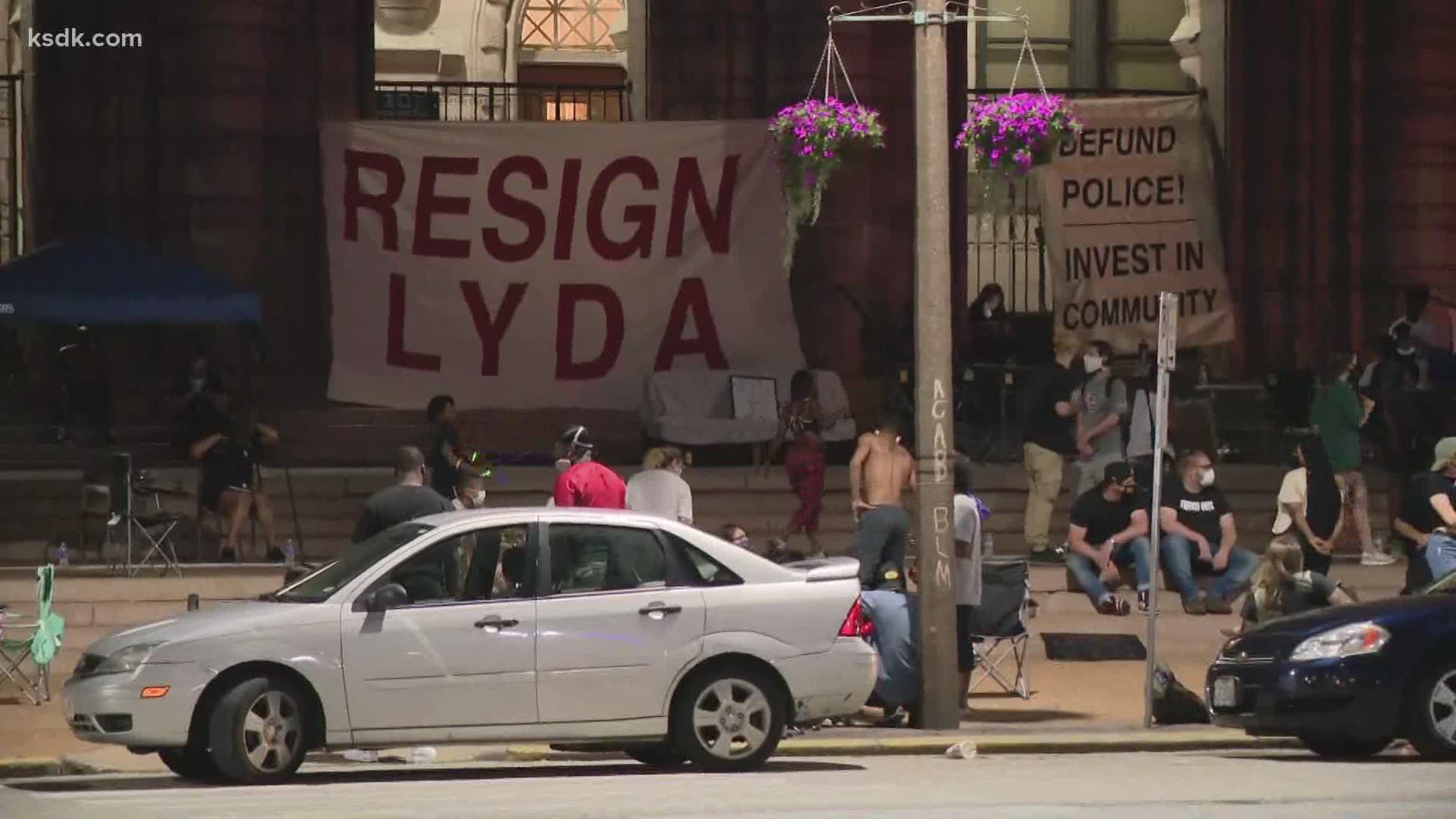 City crews were seen at 5:30 a.m. trying to scrub the large yellow and white letters off of Tucker right in front of the building. Crews were seen applying a substance to the paint and then power washing the letters.

Protesters have been gathering outside city hall off and on since Wednesday.

Various other protests have happened over the last two weeks ever since Mayor Lyda Krewson read the names and addresses of protesters who called on the city to defund police.

She read their names during a Facebook live briefing. The mayor apologized and took down the video, but protesters saw it as an intimidation tactic and things have escalated since then.

5 On Your Side received the following statement from Mayor Krewson's communication director Jacob Long Friday morning.

"Mayor Krewson is not distracted by this any of this and remains focused on what she was elected to do: addressing the needs of more than 300,000 St. Louisans who are counting on her to help get them through multiple public health and economic crises, including a worldwide pandemic. This is the main entrance of a very public building that needs to be open for people to do business with the City. Mayor Krewson is not resigning or retiring."

Protesters have camped out outside city hall – placing tents on the lawn in front of the building. Those tents were later removed.

However, protesters didn’t leave. They stayed outside city hall all night. By 4 a.m., a heavy police presence was seen around the building. Early on, some officers were in tactical gear. They tried to break up the sit-in and asked the crowd to leave. As the morning continued, officers in polo shirts and on bicycles were seen more around the building.

The Occupy City Hall St. Louis group sent a statement to 5 On Your Side Friday morning. In it, the group said Mayor Krewson and Public Safety Director Jimmie Edwards gave orders to the police department "to intimidate protesters and evict us from the public grounds of City Hall." They said the group was forced off of the city hall grounds, at which point they made their way to Krewson's home and demonstrated outside.

Edwards also added that "The protest was not necessarily a peaceful one, there were many instances of violence inside of the protests where we had protest members that were fighting each other. in fact we even had a young man that was stabbed last night, by a protester and the night before a protester pulled a weapon on a city worker, and another hit a city worker."

“Not only did they flourish the weapon, they hit him two times and I can tell you last night that person was arrested and he has been arrested for assault and second degree and armed criminal action. and I trust that he will be prosecuted to the fullest extent of the law. it is important that we deter that type of behavior, and we hold people accountable when they believe that and become as emboldened enough to do that.”

They plan to protest again Friday night outside of City Hall beginning at 6 p.m.

The police presence Friday morning came a day after two city workers were assaulted while trying to tow cars that were parked illegally outside city hall. Overnight Wednesday into Thursday, police said the employees were trying to tow the cars to make way for street cleaning when two people in the group attacked them, hitting one worker with the butt of a rifle.

Protest organizers released a statement about the altercation.

They blamed the city for escalating something they say could have been resolved with a parking ticket and said, in part, "This weaponization of parking enforcement simply to deter people's first amendment right of free speech is in line with tactics used by the city during previous occupations and protests." 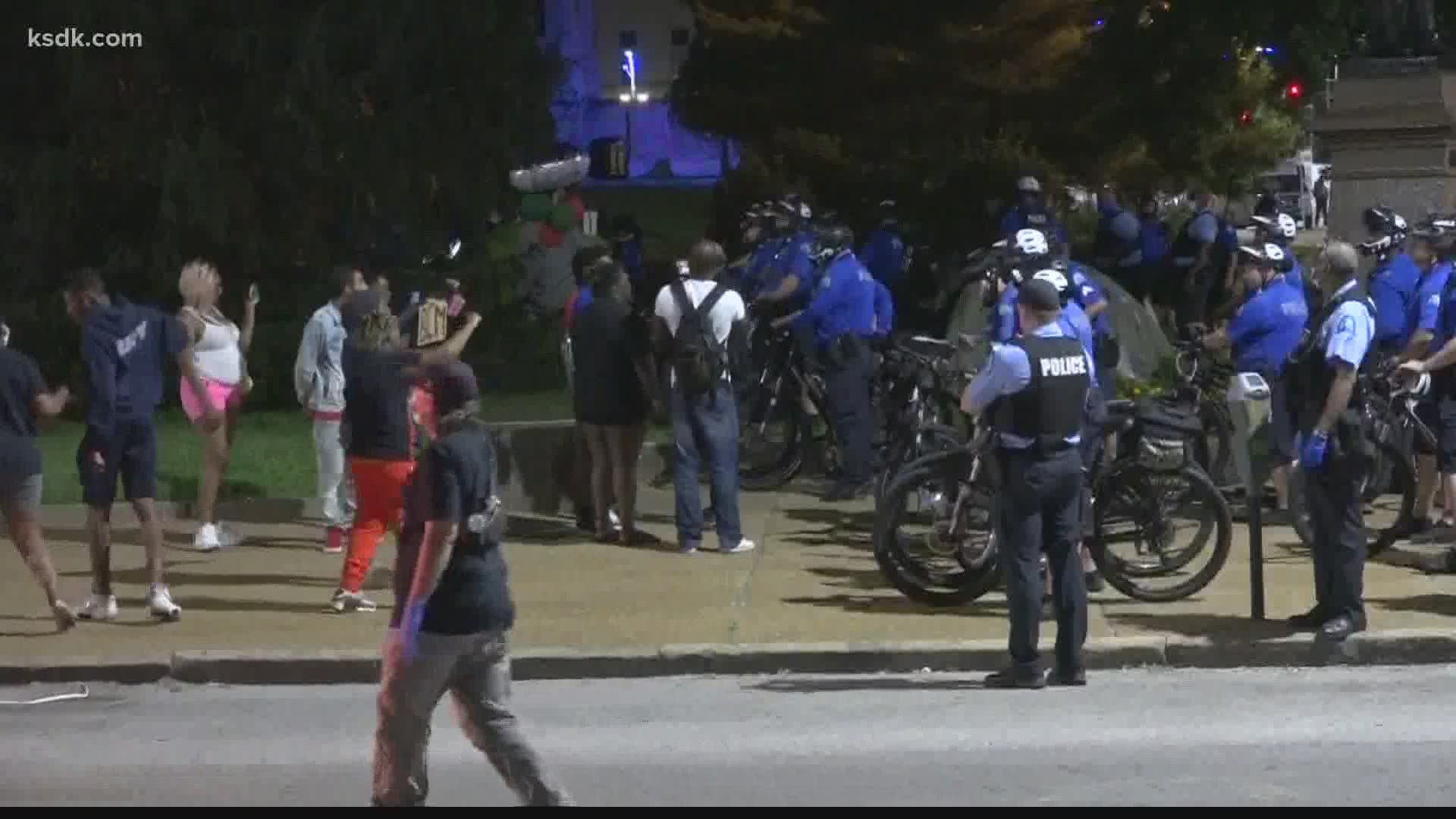