Protesters chanted “We are George Floyd”, “Black Lives Matter” and “No Justice, No Peace” 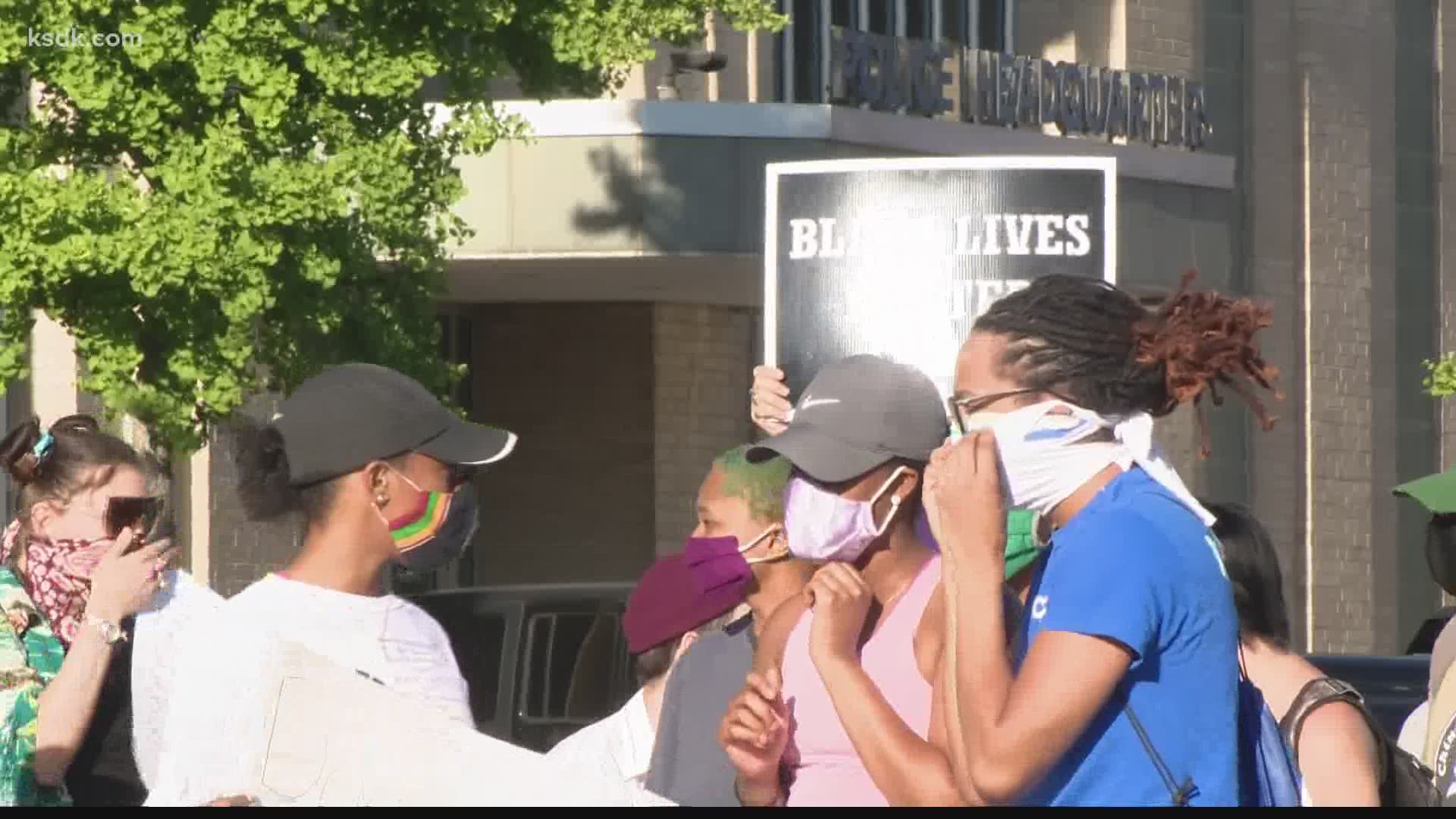 Crowds gathered outside the St. Louis Metropolitan Police Department headquarters on Olive Street near downtown. Many of them were wearing face masks as social distancing measures are still in place.

Protesters chanted “We are George Floyd”, “Black Lives Matter” and “No Justice, No Peace”.

Many people in the crowd held signs.

“I can’t breathe,” read another.

VERIFY: Fact-checking photos and claims from the Minneapolis protests

"I want people in the U.S. to know what happened to George Floyd isn't new. It's been going on for decades," said Clara Holmes, one of the organizers of Friday night's protest.

"When I first heard it and saw that video, I cried for two days," added Tina Richards.

At one point, protesters peacefully sat in the street outside police headquarters. The gathering there lasted about 30 minutes.

Then, they marched through downtown St. Louis to the Jefferson ramp to Interstate 64/Highway 40. Protesters continued holding their signs and chanting as police officers stood by on foot and on bikes. 5 On Your Side observed them blocking the ramp onto the highway.

After about two hours total, the crowd dispersed.

Richards said every step they took Friday evening was a step against "police brutality and racial injustice."

"The police hold a public trust, so they should be held to a higher standard than the public, not a lower standard," Richards said.

5 On Your Side reporter Robert Townsend was on the scene. He did not see any arrests while protesters demonstrated.

By 9 p.m., a group of protesters was gathered near Broadway and Washington in downtown St. Louis. The group was standing in the street, blocking traffic.

Missouri State Representative Rasheen Aldridge was among the protesters spotted in the crowd earlier in the evening. Aldrige is an activist-turned-state representative, whose district covers part of the city, including downtown.

On Thursday, Aldridge said St. Louisans should show their solidarity with Minneapolis.

"It's necessary to let them know we stand in solidarity because what happened shouldn't have happened, and what they're doing by taking to the streets is what they need to do," Rep. Aldridge said Thursday.

George Floyd died after a white police officer pressed his knee into Floyd’s neck to restrain him. The incident was caught on camera. In the video, Floyd could be heard calling out for help and saying he couldn’t breathe.

Four Minneapolis police officers were involved. All four were fired.

Many of the protesters who marched Friday evening also plan to be at another protest Saturday in Clayton.

It should be noted, 5 On Your Side reporters are practicing social distancing and are staying away from large crowds. The photos included in this story were shared with the station and are used with permission.