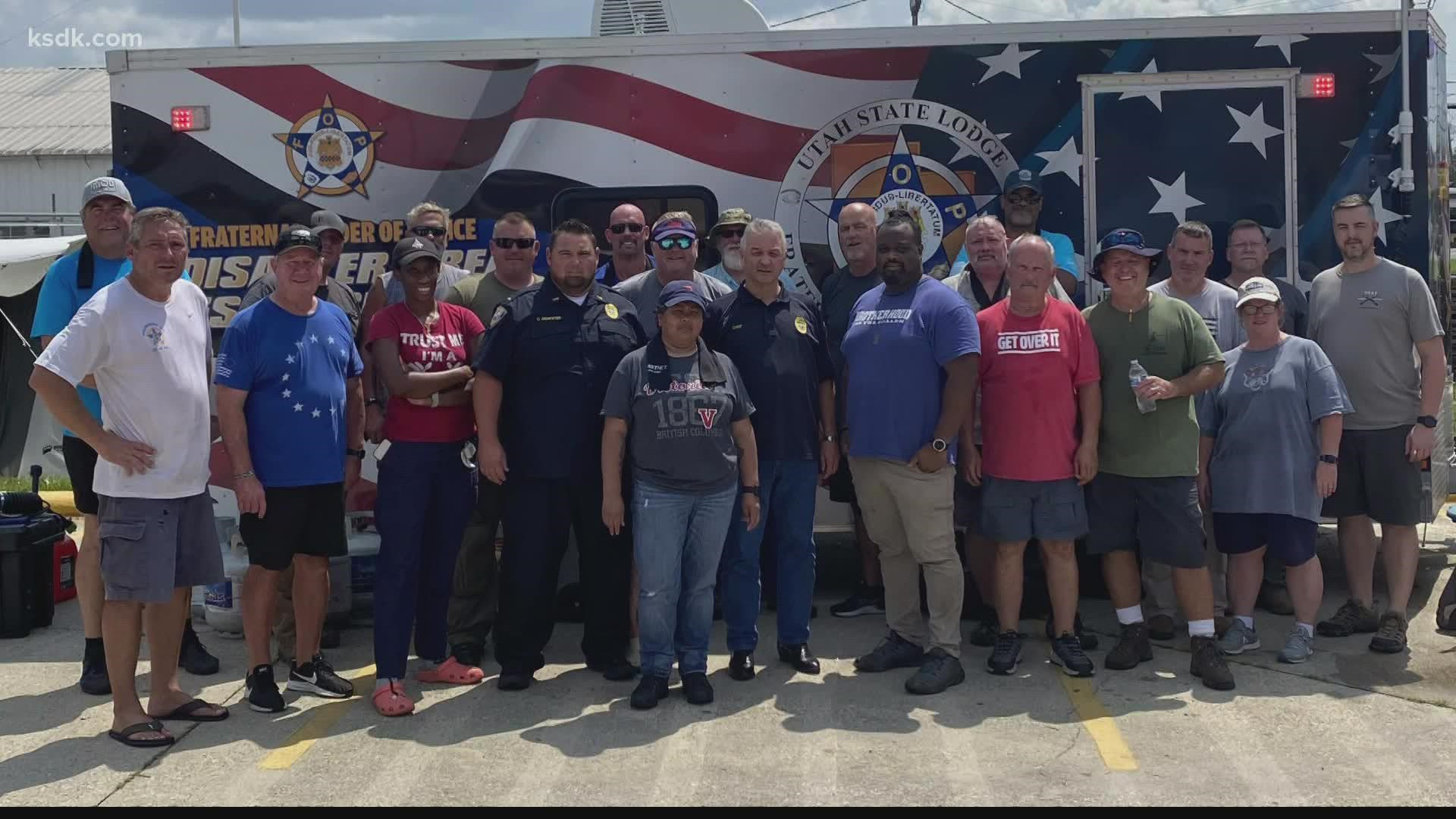 ST. LOUIS — A group of St. Louis police officers who recently deployed to Louisiana to help officers there pick up the pieces of their own homes following Hurricane Ida have learned the city will not be paying them their regular duty wages for the volunteer mission — despite years of doing so following previous disasters.

The sudden change in policy comes after the St. Louis Police Officer’s Association and city leaders reached an impasse during the collective bargaining process.

The union contract has required the city to pay officers their regular wages for such missions ever since the state’s Fraternal Order of Police formed its Disaster Response Team, or DART, as it’s known, following the devastating 2011 tornado in Joplin.

Union leaders claim city leaders did not arrive at the impasse in good faith, and therefore the previous contract must be honored until a new one can be reached. And, if it was reached in good faith, the city must honor its last best offer during negotiations, which also had a provision regarding pay for volunteer work much like many corporations do to encourage community service.

The other Missouri departments who sent officers to Louisiana paid their officers their regular duty pay to be there. And other states have since formed similar teams of officers who also use duty pay to help their fellow officers across the country – of whom helped St. Louis area officers during the 2014 protests in Ferguson.

For the spouses of the officers who spent time in Louisiana this month, there’s a bigger issue at play than the union contract, said Kelli Lowe, president of the National Police Wives Association.

She spoke to the I-Team on behalf of the wives whose husbands went to Louisiana because their spouses feared the department might retaliate against them if they spoke publicly about the issue.

“We already sacrifice a lot of time as families of public servants, and for the spouses, it’s like ‘I need you to take your vacation time when it's time to be with me and the family,’” Lowe said. “So I'm sure that there have been some tough conversations happening in the households for no reason. For absolutely no reason. This should be a no brainer. This should not be something that anyone's arguing over.”

The St. Louis Metropolitan Police Department sent a statement to the I-Team, which read: “The police division has not received a request for mutual aid that would authorize the police division to send officers to work in an official capacity for hurricane relief efforts in Louisiana. While St. Louis Police Officer’s Association members may have received pay in the past to maintain the Fraternal Order of Police/St. Louis Police Officer’s Association disaster trailer pursuant to past SLPOA collective bargaining agreements, there is no current authority to authorize pay for SLPOA volunteer work in a current collective bargaining agreement or compensation ordinance.”

Until now, no such formal request from top brass to top brass was required to pay officers for their service, said Jeff Roorda, the police union’s business manager.

“Every police chief before this one has seen the value in this and just the decency in it,” Roorda said.

On Aug. 31, Roorda sent an email to Chief John Hayden asking for paid leave time for up to seven days to send two officers to Louisiana.

Hayden’s aide, Lt. J.D. McCloskey, responded to Roorda’s email that same day with: “The City of St. Louis does not currently provide paid travel days or paid release time to participate in the below referenced matter.”

The union filed a grievance stating it believes its last contract still stands because the impasse was not reached in good faith.

Union leaders also argued the last best offer city officials gave the union stated it would pay officers their regular duty pay for disaster relief missions for up to seven days only if, “the highest ranking official of a political subdivision or public safety agency submits a request to the Police Commissioner of the City of St. Louis to staff the Missouri Fraternal Order Disaster Trailer.”

“Instead of going on vacation this year with their family, their vacation is going to be knee deep in a Louisiana swamp trying to help an officer in need on what is really a humanitarian mission,” Roorda said. “And I can't believe that our police chief and mayor and city officials won't support that.”

Officers from St. Charles County, Lee’s Summit and Jackson County worked alongside them – and got paid.

“Officers in Louisiana are working 16-, 20-hour shifts,” Roorda said. “Their houses were destroyed, too. So there's nobody to feed them. There's no power, no food, no water. So we provide food and water.

“And then, when we're not feeding them, our officers were there at their houses, tarping roofs, cutting down trees that have fallen, helping them get their houses in order because it's just their spouse and their children there. The officers are working constantly and unable to tend to their own affairs.”

Lowe’s husband is a St. Louis police sergeant, but he has not yet participated in the Louisiana mission.

She said she and her husband worked alongside officers from Oklahoma and other states during the Ferguson protests when they came here to support officers working long hours.

“For almost a month, maybe even more, they were set up here,” Lowe recalled. “They didn't have the large disaster response trailer like they have now, but they were pulling grills and trailers and they came here and they fixed food for officers. They took care of us.

“And so it is really, really important, I think, just as a whole, when officers get the opportunity to go into other areas and help that they do.”

Lowe said she believes officers will still volunteer to go on the disaster relief missions even though they will have to use their own time to do so because of their desire to serve.

The officers who spent five days there earlier this month found out the department was going to force them to use their vacation time just days before they left.

“We know what happened during Katrina. We know what happens in our own city when things flood. If we're able to pay, then let's do that. Let's not make them take vacation. They need their vacation. Look at, look at the stress of just working here in this city,” Lowe said.