ST. LOUIS — A stretch of interstate in the heart of downtown St. Louis was closed to traffic due to protesters who are marching over the death of George Floyd.

It's one of many protests that happened across the country Friday night as demonstrators call for justice Floyd's death.

“Our hearts go out to all those who are grieving the events of this week. We are deeply saddened to learn of a tragic situation involving a demonstrator in St. Louis and one of our vehicles. We offer our sincerest condolences to the family of the individual involved. There is no higher priority for FedEx than safety, and we are cooperating fully with the investigating authorities at this time.”

Missouri Department of Transportation traffic cameras showed Interstate 44 closed to traffic starting near the Gateway Arch National Park and going north. The closures stretched from Interstate 64 north to Interstate 70, which is about 1.5 miles in a normally busy part of downtown.

The incident reports on MoDOT’s traveler information map listed several spots along the stretch of interstate near downtown as a “police emergency” with estimated closures expected to last all night and into the next morning.

MoDOT told 5 On Your Side Interstate 70 was closed at St. Louis Avenue, causing traffic to back up for miles due to protests.

The view on MoDOT’s camera at I-44 and Broadway, which is right by The Dome, showed several cars parked on the interstate. Several people were seen standing around the vehicles while a line of cars with their headlights on waited behind the closure.

In several instances, people could be seen setting off fireworks over the interstate, as pictured below. 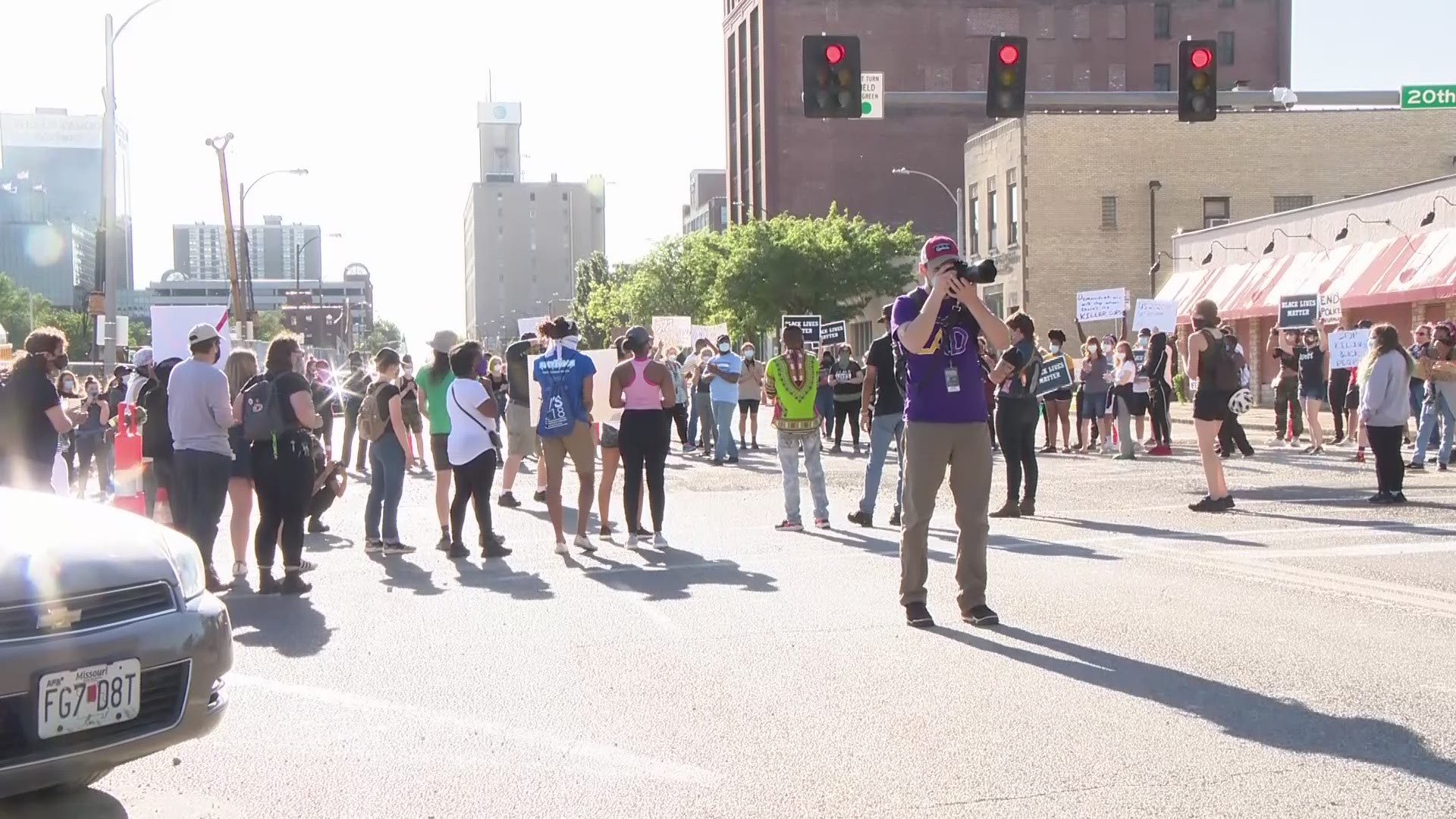 Protesters also marched through downtown to the Jefferson ramp to Interstate 64/Highway 40. 5 On Your Side observed them blocking the ramp onto the highway at about 7:30 p.m.

By 9 p.m., a group of protesters was gathered near Broadway and Washington in downtown St. Louis. The group was standing in the street, blocking traffic.

Many of the protesters who marched Friday evening also plan to be at another protest Saturday in Clayton.

Rep. Aldridge was among the protesters spotted in the crowd earlier in the evening. Aldrige is an activist-turned-state representative, whose district covers part of the city, including downtown.

On Thursday, Aldridge said St. Louisans should show their solidarity with Minneapolis.

"It's necessary to let them know we stand in solidarity because what happened shouldn't have happened, and what they're doing by taking to the streets is what they need to do," Rep. Aldridge said Thursday.

George Floyd died after a white police officer pressed his knee into Floyd’s neck to restrain him. The incident was caught on camera. In the video, Floyd could be heard calling out for help and saying he couldn’t breathe.

Four Minneapolis police officers were involved. All four were fired.