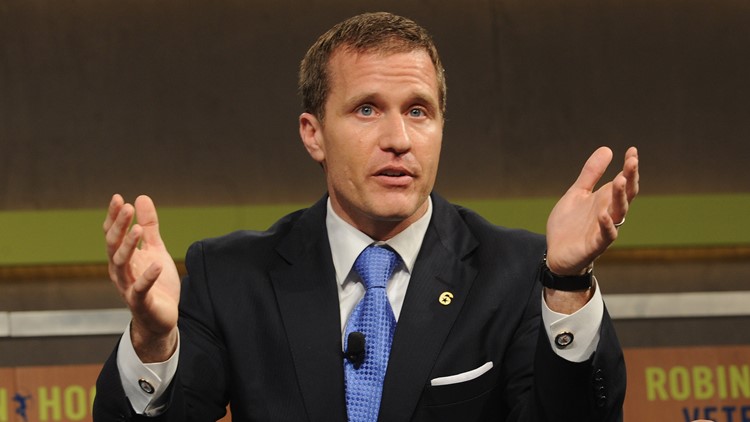 Photo by: Craig Barritt/Getty Images for The Robin Hood Foundation

Missouri pays $366K to defend lawsuit over Greitens' app use

JEFFERSON CITY, Mo. (AP) — Missouri taxpayers have spent $366,000 on private attorneys to defend former Gov. Eric Greitens' use of a self-deleting text message app, according to a newspaper's review of state records.

The bulk of the spending was by the governor's office, and about $161,000 of it came after fellow Republican Mike Parson became governor following Greitens' resignation in June 2018, The Kansas City Star reported.

A state audit in September showed that taxpayers had spent more than $200,000 before Greitens resigned to defend him in a 2017 lawsuit alleging that Greitens' office used the app Confide to avoid being subjected to Missouri's open records laws.

A judge dismissed most of the case in July, ruling the app doesn't create government records that can be retained, but the litigation is ongoing. Greitens resigned amid allegations of sexual misconduct and campaign violations as he battled mounting legal bills and the pressures of defending against possible impeachment and a criminal trial.

The Star reported that its review of state records showed that the governor's office has spent $340,000 to the Bryan Cave law firm in Kansas City, Missouri, paying its attorneys $370 an hour. Another $26,000 came from a legal defense fund administered by the attorney general's office, with a Bryan Cave attorney paid at $140 an hour.

The governor's office negotiated its own contract with Bryan Cave in March 2018, largely bypassing the legal defense fund, which is designed to keep expenses down.

"We inherited this case with these contracts and agreements already in place," said Parsons spokeswoman Kelli Jones.

The Star reported in late 2017 that Greitens and his senior staff were using Confide, which automatically deletes a text message after it has been read. The use of the app alarmed transparency advocates.

The attorney general's office usually defends a state agency when it's sued. But then-Attorney General Josh Hawley was conducting his own investigation into Greitens' use of the app and gave Greitens permission to hire private attorneys to defend the governor's office in the lawsuit.

Jim Layton, a former state solicitor general who spent 22 years in the attorney general's Office, said it's unusual for private attorneys to be paid by a state agency and by the legal expense fund at the same time.

"I don't recall that ever happening," he said.