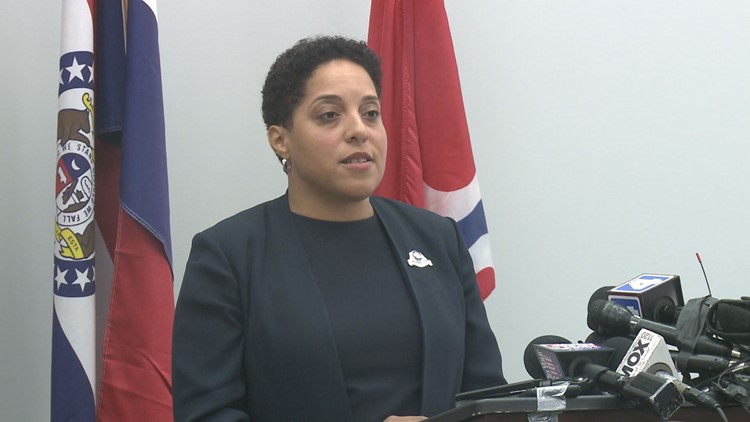 The report released by the Missouri Ethics Commission accused her committee of seven different violations including exceeding cash contribution limits and failing to file campaign finance reports in a timely and accurate manner.

The commission found probable cause that Gardner and her campaign failed to report nearly 100 monetary contributions totaling more than $305,000 and 255 expenditures totaling nearly $90,000.

Gardner was elected St. Louis Circuit Attorney in 2016 after serving as a member of the Missouri House of Representatives.

In a statement from the Circuit Attorney's Office, Gardner said the audit from the commission stemmed from a complaint by a "Republican political operative during the former Governor Greitens’ criminal investigation."

Gardner's office indicted then-Governor Eric Greitens with invasion of privacy in February of 2018  in connection with a 2015 affair. Her office dropped that charge a day after Greitens announced he was resigning.

The release also said the issues were clerical in nature only and all the money from the campaign has been accounted for.

The statement from Gardner's office said she repaid the committee immediately when she was made aware of what she called oversight and accounting errors. Those errors were:

Gardner and her committee were fined $63,009 by the commission. They paid 10 percent of the fine within the first 45 days, so the rest of the fine was stayed in accordance with Missouri law.

Gardner's full statement is as follows:

Wednesday, January 2, 2019 St. Louis, MO – Kimberly M. Gardner announced today that she has signed a Consent Order for administrative errors identified by a Missouri Ethics Commission audit, which was initiated after a campaign finance complaint was made by a Republican political operative during the former Governor Greitens’ criminal investigation earlier this year.

The Missouri Ethics Commission’s audit began in the spring of 2018. The Commission conducted its inquiry with the full cooperation of the CITIZENS TO ELECT KIMBERLY GARDNER CAMPAIGN COMMITTEE. The Commission’s in-depth audit identified issues that were clerical in nature only. Upon disclosure, all such issues have been properly addressed. There were no allegations of misappropriation, missing money or any other criminal violations. Every dollar has been accounted for, and corrections will be made on all appropriate campaign reporting moving forward.

“I take full accountability for my Campaign Committee’s reporting errors identified by the Commission,” said Gardner. “Before any formal findings by the Committee, I reimbursed my Campaign Committee for the following oversites and accounting errors: a $16.16 charge mistakenly charged to the wrong credit card and some housing expenditures during my time as a State Representative that the campaign accounted for in error.” These payments were paid immediately after the Campaign Committee was made aware of these discrepancies.

“I know my opponents and those guardians of the status quo will attempt to use this to slow or stop my approach to make our city safer through expanding alternatives to incarceration for first-time, low-level offenders, my efforts to work closer and smarter with federal prosecutors to take more violent offenders off our streets, and other much-needed reforms,” Gardner explained. “However, as a public servant elected by the voters of the City of St. Louis, I will not allow this to serve as a distraction to the important work required to make our city a safer and more just place for everyone.”

The Gardner’s Campaign Committee plans to replace its treasurer with an individual with an in-depth understanding of accounting and campaign finance reporting.

Gardner was registering for a fitness club membership and was asked to provide two forms of identification. She didn’t have her driver’s license in hand, so she used the common practice of using two debit/credit cards as proof of identification. One card belonged to the campaign. The fitness club employee mistakenly charged the campaign card for $16.16 once for the monthly memberships fee. Subsequent monthly fees were not charged to the card. The Campaign Committee was reimbursed immediately after being notified about the issue.

Between April 2015 and July 2016, Gardner reported on her campaign report that she used her apartment in Jefferson City to live while on state business. She also made campaign calls from her apartment, which was completely legal. It was an administrative violation for the Campaign Committee to claim some of the cost of the apartment at the same time Gardner was being reimbursed by the Missouri House of Representatives. In June 2018, upon learning of this issue, the Campaign was immediately reimbursed $2,855 for the housing expenditures.

On August 2, 2016, the Campaign Committee needed to pay several hundred election-day workers for their work at the polls. In an effort to document payment to individual poll workers and provide a no-cost method to cash their checks, the Campaign Committee used cashier checks to pay workers with the agreement with the bank that the workers would not be charged the customary check-cashing fee charged to those who do not have an account at the bank. Given a large number of election-day poll workers for the Gardner campaign were unbanked, the fee would have significantly impacted a large number of hardworking persons. Consequently, the bank advised the campaign to use cashier checks to eliminate the burden placed on these workers. However, the campaign was unaware that cashier checks (that contained "check" numbers on them) were considered cash by campaign finance rules. As a result, they required a specific reporting method to be included in campaign finance disclosure reports. The reporting will be corrected and amended in the Campaigns Committee’s modified campaign reports.

The remaining issues included the failure to timely or accurately file campaign finance disclosure reports. These reports will be modified and amended.