A memo from the prosecutor's office said changes are coming to marijuana, child support and bail.

ST. LOUIS COUNTY, Mo. — The changes in the St. Louis County Prosecutor's Office on Wesley Bell's first day in office were not limited to personnel. A policy memo from the office announced numerous changes, effective immediately.

The memo said Bell's office will change the way they prosecute Marijuana and child support as well as making changes to the enforcement of bail and bond for misdemeanors and class D and E felonies.

The memo said all associate prosecuting attorneys will issue summons for court dates — rather than warrants for arrest — on all misdemeanors as well as class D and E felonies. The change does have exceptions.

For misdemeanors, if the victim of the crime has signs of a physical injury or if the suspect is a danger to a witness or victim, prosecutors can request arrest warrants or cash bond.

For class D and E felonies, prosecutors can request arrest warrants or cash bond if the suspect is a threat to a witness or victim, has more than one prior conviction involving the same victim or has failed to appear in court twice in the last two years. Those failures to appear in court must have been in an effort to avoid prosecution. Examples include evading police upon arrest or using an alias in a police encounter.

The memo also said Bell's office will not revoke bond based only on possession or use of marijuana.

The memo said Bell's office will no longer criminally prosecute the failure to pay child support. Those changes mean prosecutors will not pursue charges in any pending cases without written approval from a supervisor.

Bell's office will not revoke bond based only on failure to pay child support, the memo said.

According to the memo, prosecutors will only file charges that they believe can be proven beyond a reasonable doubt at the time of filing, not charges for which only probable cause can be met.

The memo said the change is in an effort to cut down on overcharging.

A spokeswoman with Bell's office released the following statement in addition to the memo:

“The Prosecuting Attorney’s office is committed to transparency at every step. On Day 1, an Interim Office Policies document was distributed to provide guidance in the daily operation of the office as the new administration continues the discussion and development of policies. Of utmost importance to the new administration is the receipt of feedback from current employees prior to the finalization of policies. Publicly reported information based on that document contains some items that need clarification and Prosecutor Bell would like to make the full document public to assure transparency and accuracy.”

You can read the full memo below or by clicking here. 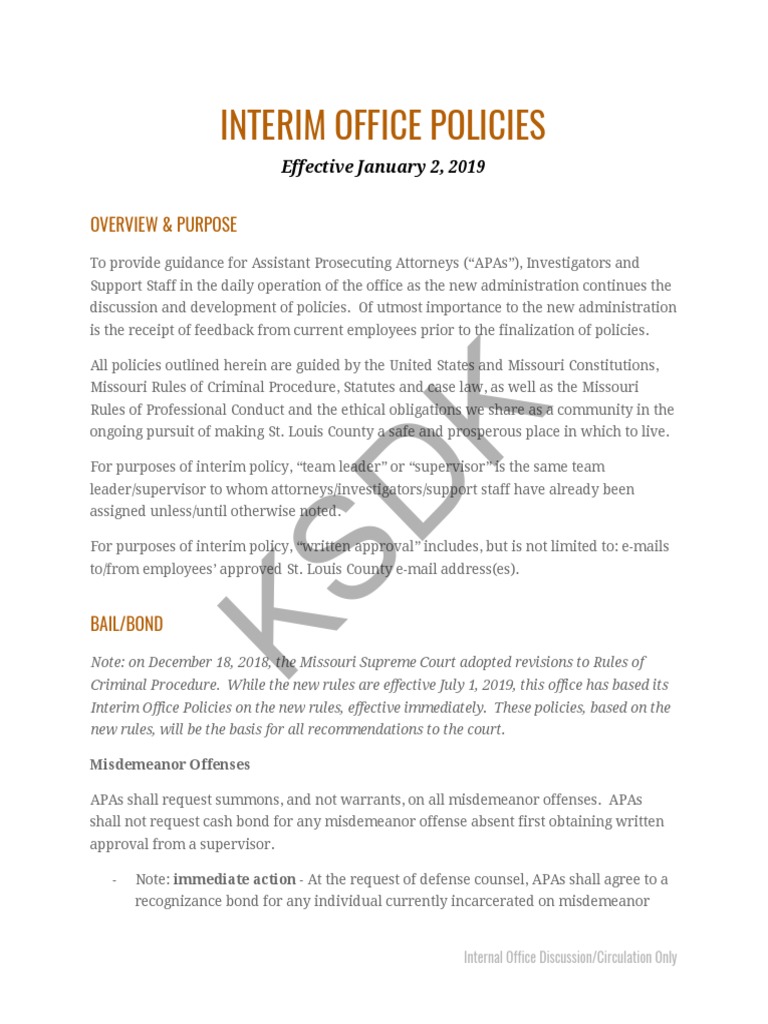 Interim Day One Policies | Probation | Bail
K APAs will issue only the charges which, based on the APA's good faith belief, can be proven beyond a reasonable doubt on the date of filing, and not the charges for which only probable cause can be met.