Opinion: Why the Cardinals and Blues completely missed the point with their statements | Our Ahmad Hicks shares his thoughts

As the only black member of the St. Louis media to cover the Blues and Cardinals daily, our Ahmad Hicks says the joint statement failed to recognize the bigger issue 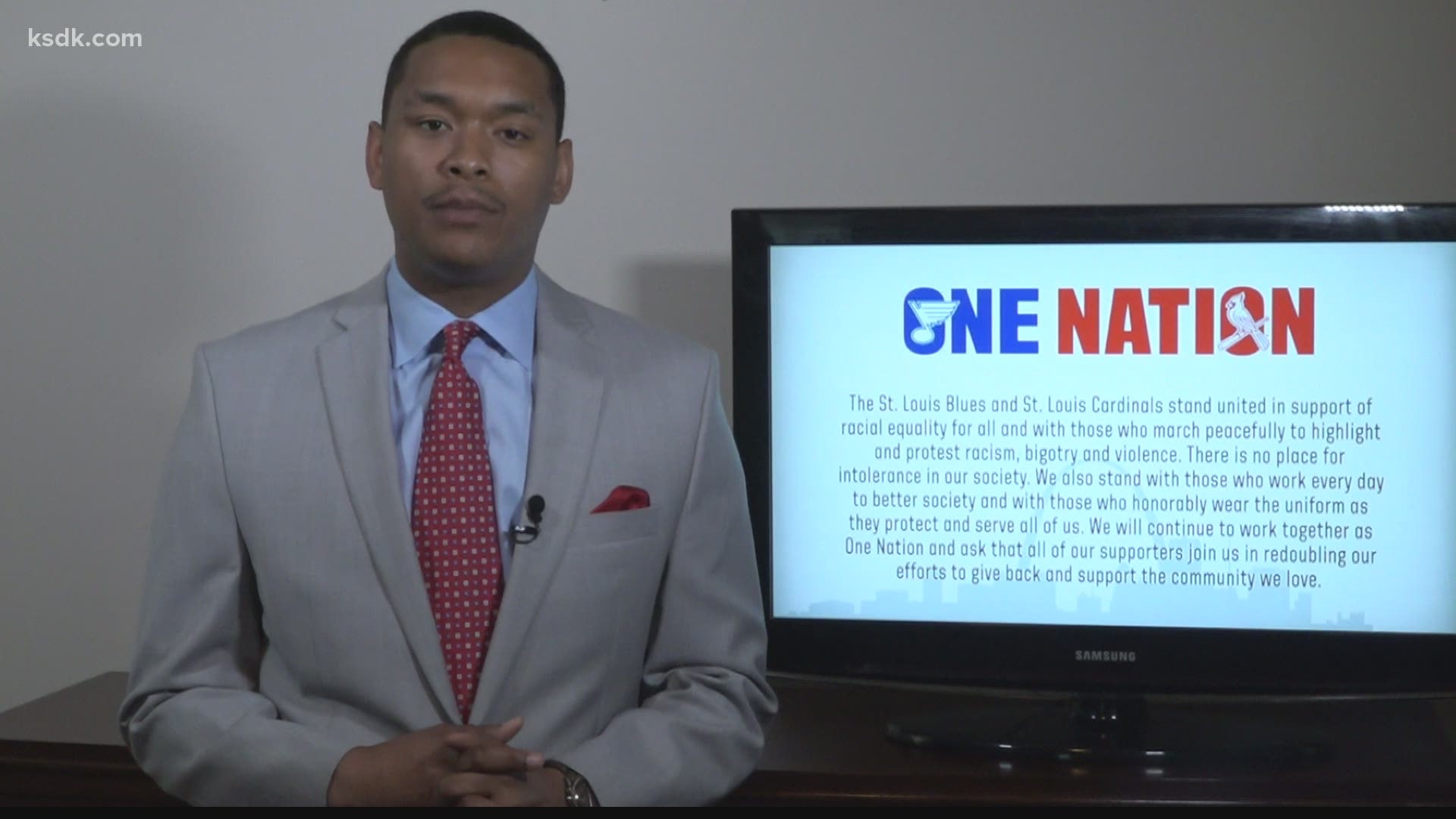 The Blues whiffed on a slap shot. The Cardinals swung and missed on a hanging curveball.

As a proud St. Louisan, I take great pride in our city and our beloved sports teams. Being one of a few black sports reporters in St. Louis, I cherish this job more than you can imagine.

Throughout the years, I’ve seen how sports can help block out the ugly reality we call life.

But nothing can hide what's going on right now, not even the coronavirus pandemic.

Our city stands divided. Our country is on fire. George Floyd, a black man, died at the hands of the police. His death has sparked outrage and disappointment across every state.

This is a feeling most African Americans and I know all too well. Sadly, it was another moment where people of color yelled, "here we go again."

If you've never been put in handcuffs and told you “fit the description” of another black man accused of a crime. Read that again. You fit the description. Multiple times. You may never understand. Sadly but luckily, I was raised by parents who taught me how to handle that possible police interaction and I'm here to talk about it today.

I know this is a very sensitive topic, and I'm normally reluctant to be this open on this matter. But normally teams and players stay silent as well because let’s be real, it’s too controversial.

But what’s happening right now in America feels different. Players and organizations are using their platforms to speak up. This is something as an adult, I have never seen before.

We all know that racism and injustice is wrong, right? So what is the problem denouncing it? Or calling it out. Losing a supporter or fan who isn’t ready to face the reality of our times shouldn't be a concern. Listening to those hurting or being willing to change the way you think is okay.

Tuesday, June 2 was a big day to shine for the Cardinals and Blues. "Black Out Tuesday" was a day intended to beam a light on long-standing racism and inequality and to support the Black Lives Matter movement. Most MLB and NHL organizations stepped up to the plate and addressed the matter directly.

Instead, in my opinion, the Blues missed an empty netter, and the Cardinals struck out looking.

They didn’t address the actual problem! They failed to mention RACISM and police brutality against people of color shouldn’t be accepted or tolerated. The statement didn't include George Floyd or black lives. They failed to use their platform which, if we do the math -- reaches nearly 3.5 million people on social media.

“The St. Louis Blues and St. Louis Cardinals stand united in support of racial equality for all and with those who march peacefully to highlight and protest racism, bigotry and violence. There is no place for intolerance in our society. We also stand with those who work every day to better society and with those who honorably wear the uniform as they protect and serve all of us. We will continue to work together as One Nation and ask that all our supporters join us in rebuilding our efforts to give back and support the community we love.”

Okay, so I know what you may be thinking, "They made a statement Ahmad, stop complaining." They said they 'supported equality for those who protest racism, bigotry and violence and support officers who honorably wear the uniform.' Here you go.

You’re right, they did say those things.

But, again, what about all the black lives lost? It's clear the black community is suffering again. So why not address it head-on?

When I read the statement, it reminded me of the NFL and how it now claims it supports these very issues that Colin Kaepernick brought up years ago when he decided to peacefully protest by taking a knee during the National Anthem. Remember that? They said that wasn’t the time or place for a protest. It was "disrespectful." But it was never about the military, the song or the flag. Still, here we are, years later trying to address the same problem he was actually trying to avoid or in these recent cases, bring awareness to. Anyway, that’s another story…

The problem at this moment is, some people, and organizations care more about an image and money than they do about what’s right and wrong.

When Rosa Parks sat, that wasn’t the time. When Martin Luther King Jr. marched, that wasn’t the way. When Los Angeles was in an uproar after Rodney King, that was a disgrace. When Trayvon Martin and Mike Brown were killed, people spent time talking about what they shouldn't have done before they died.

We often create these narratives of why someone shouldn’t have been doing something. We sometimes listen with the intent to respond, not with the purpose of understanding.

Odds are, a lot of you reading this won’t care or think what I’m saying holds any weight. You may be truly upset, or confused at this point. But ask yourself, are you mad and flustered because I’m saying police brutality against people of my color, racism, social injustices and our teams flirting around the topic isn’t okay? Or because I don’t necessarily think the way you do?

Of course, all cops aren’t bad cops. They just aren't, some are, but not all! Just like one player on a team doesn't define that team. All protesters aren’t bad either, they simply want to be heard.

Looting, riots, and violence isn't the answer. They haven’t been for years and I never will support those actions. More-so, shooting innocent police officers will never get the justice or answers we seek. They are here to protect and serve, and a majority of them do just that.

But get this - the killing of unarmed, defenseless black people, isn’t okay either. It never has been. Not getting justice, digs deeper and deeper. It hurts, and we as African Americans can never forget our history and what some of our ancestors died for.

So, before you tell someone how to protest, ask yourself why they are out there in the first place.  Ask what makes them so mad?  Because if a store being broken into and looted bothers you more then what sparked these protests again, you’re the problem. Yeah, you!

Police brutality is a real thing. So is the Black Lives Matter movement. When people yell “black lives matter," it’s not because 'all lives' don’t matter, it’s simply saying, these black lives don’t seem to matter enough and now we need to bring attention to the situation and address the issue. Because if 'all lives' mattered, we wouldn't be arguing why black lives matter, right?

Oftentimes justice isn’t served, rage builds up, and the WHY people are protesting gets lost in the reports of looting and violence, which distracts us from the real problem - RACISM and police brutality and social injustices against African Americans.

The deaths go forgotten until, I’ll use a sports phrase to help some people understand, “It’s the next man up.”

It’s sad, but it’s reality. America will be this way until we take necessary actions, together. Don't just post on social media, hold people accountable. Everyone.

Some players for the Cardinals and Blues posted heartfelt genuine statements that provided a glimmer of hope showing they realize silence isn’t okay, that racism and injustice aren't okay, directly. The Blues and Cardinals didn't in that joint statement. They also didn't share a statement from their players on their pages, which is a shame, because some were very powerful and sincere.

The Blues and Cardinals aren't bad organizations! This isn't what I'm relaying to you. They're always in the community giving back and doing what they can to help. I've covered plenty of these events, I know.

I just believe they sidestepped the controversial topic and failed to pinpoint the exact problem in America like we often do, without even realizing it.

But still, the Cardinals will be the lifeline of summer in St. Louis. The Blues will keep this city tuned in, now more than ever. I’ll always love those two teams, good or bad.

But, again at this moment, I’m disappointed.

The Blues missed a beat.

The Cardinals swung and missed.

To see what Blues and Cardinals players had to say individually, check out some of their posts below.