One St. Louis area high school is taking a counter-cultural measure, promoting their best athletes to play as many sports as possible. 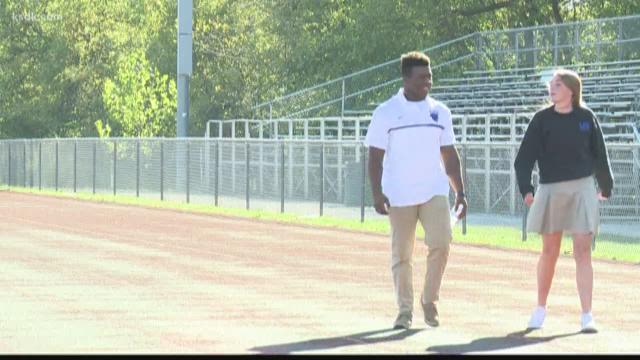 ST. PETERS, Mo. - With AAU and club sports programs as popular as ever, the culture of youth sports has evolved rapidly. Long gone are the days of young athletes playing a different sport for each season. It’s now more common for athletes to be pushed to stick to one sport. But is specialization harmful?

Lutheran High School in St. Charles is pushing their students to play more than one sport.

“I think everyone is aware that we’re fighting a culture of sports specialization the last several years,” said Doug Kuhlmann, Lutheran High School director of activities and development.

DYK 58% of @LutheranCougars athletes are multi-sport? Our mission: Keeping the best interests of the students at the heart of ALL decisions! pic.twitter.com/agBq68Lsm8

Kuhlmann told 5 On Your Side Sports that many students at Lutheran are involved in multiple activities, but that he believes there is still work to be done.

“On the sport landscape we have over 80 percent of our kids playing at least one sport, which is an incredibly high number. Of those 80 percent, 58 percent of them are participating in multiple sports,” he said.

“When I go talk to college coaches they ask me right away ‘what sports to you play?’” said Arcullous Heard, a Lutheran student athlete who runs track, plays football and wrestles.

“I do wrestling to improve my football because it gets me looser and builds up my agility. I do track and field to help my wrestling,” he said. “It’s great, because at the end of the day you feel like you did something and you’re accomplished.”

Meredith Leigh is another tri-athlete at Lutheran. She runs track and cross country but said swimming is the x-factor.

“It’s a good break for the legs because it’s low impact and gets the shin splints out of the way a little bit for the season,” she said.

And what they say makes sense according to Dr. Mark Halstead.

“You do develop different muscle groups. And those can actually help you in other sports,” he said.

“We see a lot of overuse injuries kids are getting now. Just because they’re constantly stressing the same area year around,” he said. “We see a lot of kids that get burnout from playing their sport year round.”

So improved recruiting resume, better health and lack of burnout? It appears that playing multiple sports, contrary to popular belief, is likely better for young athletes.

“Mix it up. I think it’s important that we’re spreading the wealth around and doing other sports,” said Halstead.

St. Louis Children’s Hospital will be opening the Young Athletes Center next month, located at St. Louis Children's Hospital Specialty Care Center. The Center is staffed by the orthopedic and sports medicine team and is dedicated to caring for kids of all ages with sports-related injuries, as well as injury prevention.