"I've got a decent chance of getting fined, and my wife Michelle, ya know, gosh darn it, it's for the integrity of the game," Shildt said 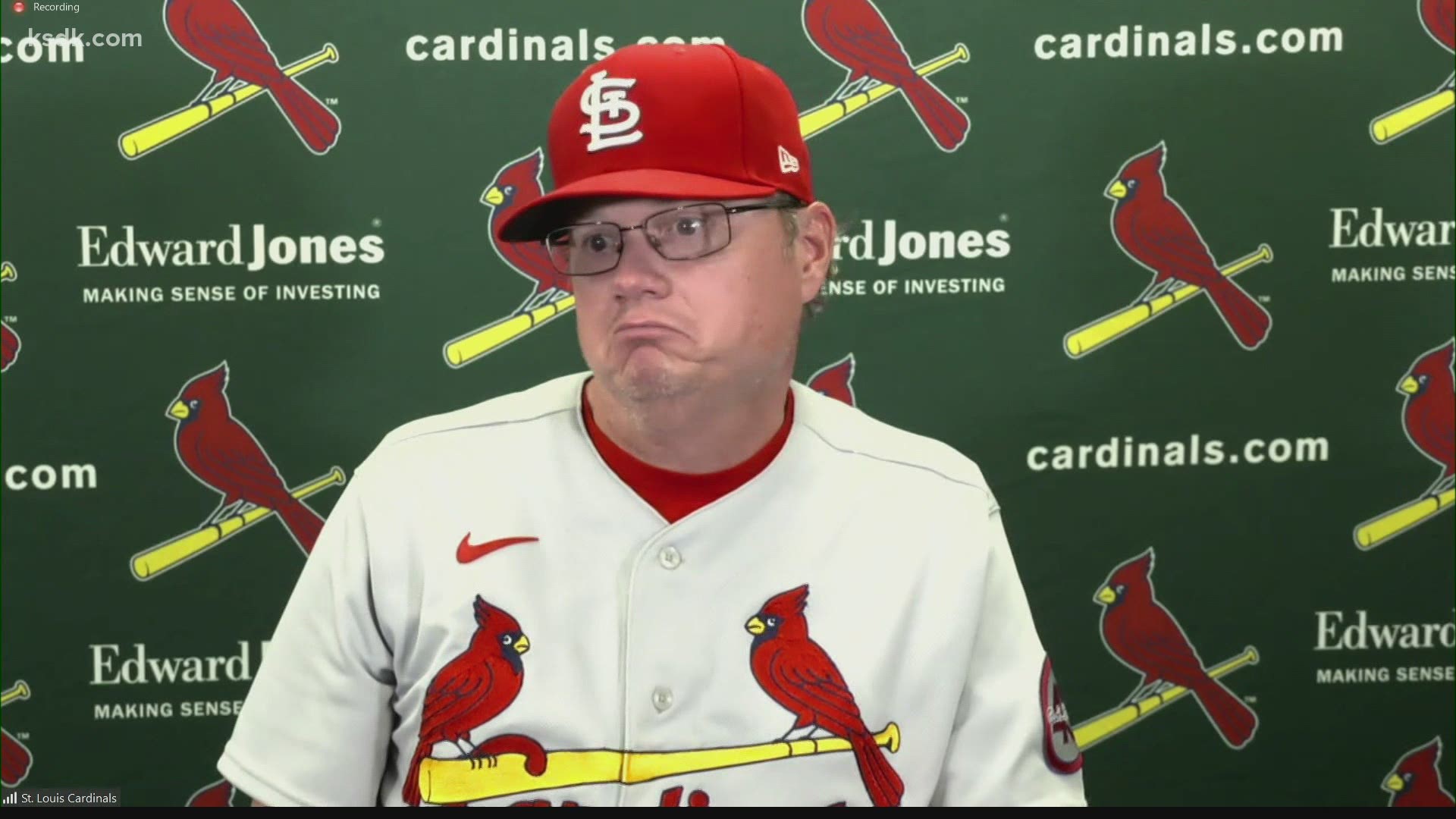 CHICAGO — The Cardinals avoided a sweep in Chicago with a 4-0 win, but the conversation after the game is not centered around the final score.

In the seventh inning, Cardinals relief pitcher Giovanny Gallegos was summoned from the bullpen. As he was making his warmup pitches, he was intercepted by crew chief Joe West and asked to surrender his cap due to discoloration on the bill.

Cardinals Manager Mike Shildt saw what was happening and came out of the dugout to figure out what was going on. When he found out why they were talking with Gallegos, he lost his cool and was ejected from the game.

While sporting a new hat, Gallegos appeared unfazed. He pitched an inning and two-thirds without allowing a baserunner and recording three strikeouts.

Shildt explained his anger during a postgame interview, saying it was the wrong place and wrong time to address an ongoing issue in the sport.

"Why do I take exception with that? Because this is baseball's dirty little secret, and it's the wrong time and the wrong arena to expose it," Shildt said.

Shildt said Gallegos uses the same hat all year long, and the spot was likely sunscreen and rosin, which Shildt said hitters are OK with pitchers using and the MLB commissioner's office does not want to crack down on.

Shildt said if they are going to go after guys who use sunscreen and rosin, it's time to go after more blatant offenders.

"Why don't you start with the guys that are cheating with some stuff that's really impacting the game?" he asked.

He said it wouldn't be hard to find those offenders.

Shildt acknowledged that his postgame comments would likely cost him some money, but he said it would be worth it if proper changes were made.

"I've got a decent chance of getting fined, and my wife Michelle, ya know, gosh darn it, it's for the integrity of the game," he said.

Shildt said in hindsight, he didn't have any problem with the umpires but said they are dealing with an impossible task. In a written statement, Shildt said:

“I have a great working relationship with the umpires and Major League Baseball. They have a lot of challenges to doing their job and they do it well. Having to police foreign substances, candidly, shouldn’t have to be a part of their job.”

Joe West, who set the MLB record for most games as an umpire in Tuesday night's game, seemed to have no hard feelings after the game either.

RELATED: Joe West to break record for most games as umpire in Cardinals/White Sox game Tuesday

West told Belleville News-Democrat reporter Jeff Jones he asked Gallegos to remove the hat so he could remain in the game, calling it a "defensive mechanism."

"When Mike got upset about it, I don't think he really knew what we were doing," West said. "I was just trying to keep the pitcher in the game"

West went on to say Gallegos' hat was placed in an envelope and sent to the commissioner's office in New York for inspection.

That may be the part that Gallegos is the most concerned about. When asked what Gallegos had to say about the whole incident, he said it barely registered.

You can watch the full 12-minute statement on the ejection below or by clicking here.