Maroon 'excited' to be back in St. Louis, receive Stanley Cup ring 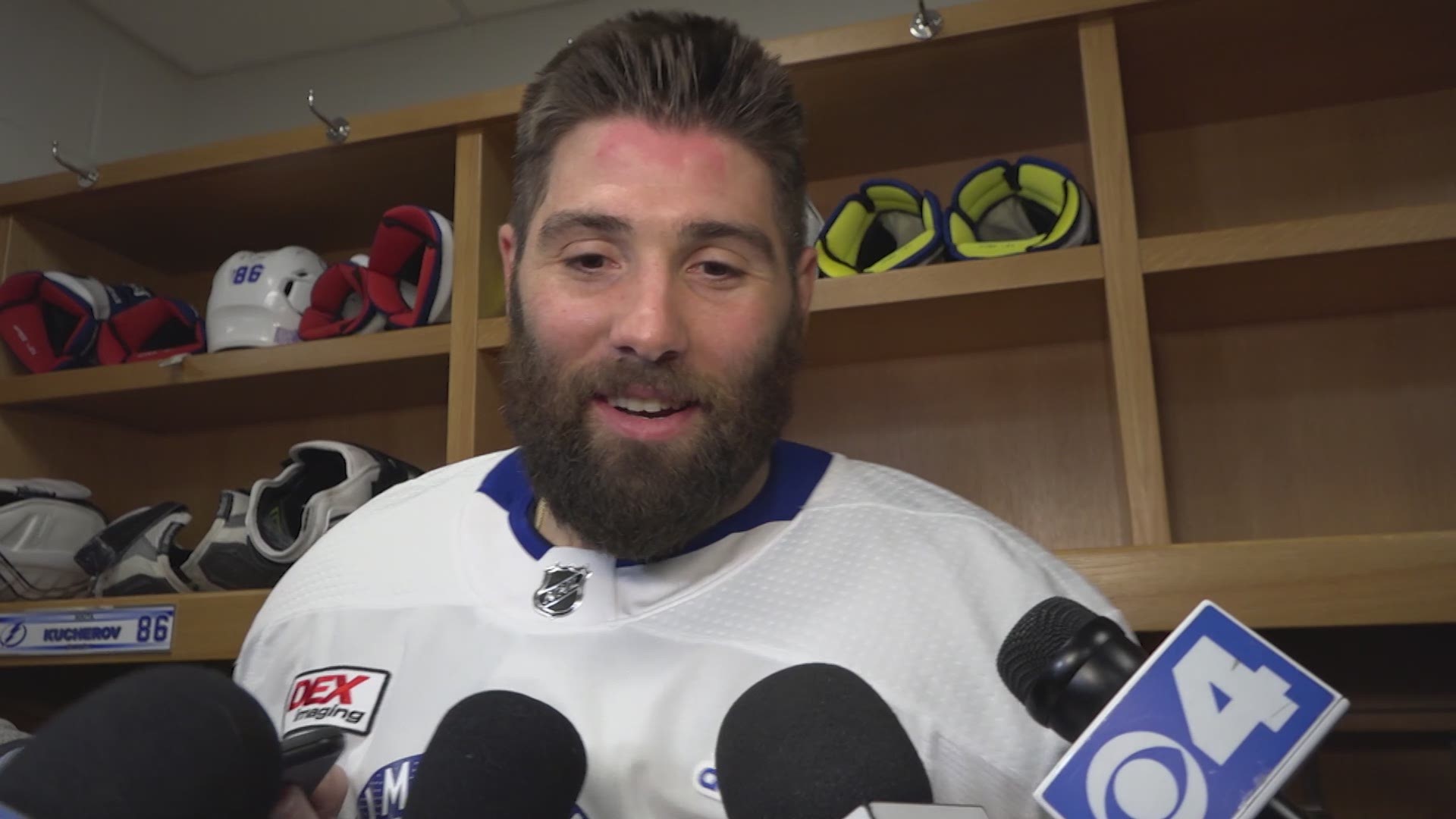 ST. LOUIS — Pat Maroon was all smiles, full beard flowing and ready to do the hockey thing again.

The Oakville native, who helped the Blues win their first Stanley Cup in franchise history last season, returned for the first time with the Tampa Bay Lightning (9-6-2) when they face the Blues (12-4-5) Tuesday (7 p.m.; FS-MW, NBCSN, ESPN 101.1.FM).

Maroon, who played just the one season here last year before signing with the Lightning in August for one season and $900,000, will be the last of last year's group to get his Stanley Cup ring and he'll get it from Blues general manager Doug Armstrong in a pregame ceremony prior to tonight's puck drop.

"Doug called me a couple days ago and told me what he was going to do, so I'm really looking forward to tonight," Maroon said. "It's going to be cool. I know some of the guys got emotional when they saw it and opened it for the first time. I know I'm looking forward to it. You really don't know if it's reality, did we really win the Cup because I haven't seen much of it. I haven't seen my name on the Cup yet. Through picture, but not in real life, and I haven't seen the ring yet. I think once I see all that, it'll hit reality."

Maroon, who scored one of the biggest goals in Blues history with his double-overtime goal in round two of Game 7 here against the Dallas Stars, a 2-1 Blues win that sent them to the Western Conference Final against San Jose, is an emotional guy. He kept his emotions in check after the morning skate but that could change before the game.

Maroon formulated one of the toughest, grittiest lines for the Blues in the postseason last year with Tyler Bozak and Robert Thomas before Thomas was injured in the Cup Final against Boston, and after a tumultuous first half of the season for 'The Big Rig,' a fairytale story was built and culminated with the unlikeliest -- but grandest -- of finishes.

"It's definitely going to be an emotional night," Bozak said. "Obviously he was a huge part of what we did last year and being from here, a lot of family and a place that means so much to him. Such a well-liked guy in our room that everyone got along with really well and still keeps in touch with. I know we're all excited to see him and maybe he'll take it a little easier on us in the physical category out there."

As for the chirping?

"Once it's all said and done and he gets his ovation and he waves at the crowd and all that, I think he's going to be the old Pat Maroon," said Blues center Brayden Schenn, who will face older brother Luke tonight. "He's going to be having fun out there, chirping guys, laughing, playing hard like he always does. I'm sure he's excited to get back here, I'm sure he circled this one on his calendar every since he signed with Tampa Bay and we're looking forward to playing him.

"You've got to expect it's going to be a great reception. Obviously he was a very well-liked guy in our locker room. He still talks to a lot of guys through text message, stuff like that. He's close with a lot of guys and obviously with him being a hometown kid scoring one of the biggest goals in St. Louis history, the crowd's obviously going to give him a good ovation. We're going to be happy to see it from our end. He was a huge piece to our team, huge piece to our locker room and obviously we miss him in this locker room."

When asked about the chirping, Maroon laughed.

"We'll see what happens," Maroon said. "I don't know if I'm going to chirp that much, but we're going to have a couple laughs, that's for sure."

"Probably (chirp) just our new guys, I would assume, or maybe some of the other guys that he's really close with," Bozak said. "I'm sure he won't be quiet throughout the game, I know that for sure. I think we're just excited to see him.

"He's kind of irreplaceable (here in St. Louis) in that category. He's one of the best at that on and off the ice. Nobody really has taken over that job."

Blues coach Craig Berube, who one year ago was put in charge of coaching the Blues on an interim basis after Mike Yeo was fired, spoke of what Maroon meant to the run last year.

"He was a big part of us and what we did, scored a couple big goals in the playoffs," Berube said. "He's part of that winning team, always will be. He's a great guy, great locker room guy. Everybody liked him. I thought he was really good for our team.

"I coached Patty in Philly as a kid. I've known him for a while, I guess. He's just a team guy. I like that. He does a good job in the locker room and does what we ask of him. I like the guy, he's a good good guy and he's a good team guy."

RELATED: Commentary: Kostin's NHL debut was solid, offering a glimpse of what the high draft pick can do next

The Blues will try to end a three-game winless slide (0-1-2) against the league's top-scoring team in the Lightning, which averages 3.71 goals per game and has won four of six.

The Blues will do so by re-configuring their forward lines in order to draw out some more offense.

One of the changes includes moving Bozak up to play with Schenn and Jaden Schwartz.

"I think trying to see if Bozak can have some chemistry with those guys," Berube said. "I know that I've moved Bozak late in games a lot of times on different lines, and he's been with those guys and they've been good. I just haven't put them together for a whole game yet. I'd like to see if something can happen there."

It's been tough sledding for Bozak, who has eight points (two goals, six assists) in 21 games, but in his defense, it's been a hodge-podge of players moving in and off his line throughout the season.

"There's a lot of changes with linemates, a lot of different looks and things," Berube said. "He's a good soldier that way. He accepts his role with us and he always tried to help whoever we put out there, young guys and things like that. He hasn't had two linemates too consistently all year."

Bozak blew that notion off.

"It's been fine," Bozak said. "Obviously it's nice to find and mesh with a line and stick with it. It's inevitable there's going to be injuries throughout the year, there's going to be guys moving up and down the lineup, so you've got to be ready to play any role with any guys. Everyone's a great player in here. It's just about finding that chemistry as quick as you can when you do get new linemates. Hopefully that will be the case tomorrow."

Not only is there a reunion of sorts for Maroon, but former Blues defenseman Kevin Shattenkirk marks his second game back here since he was traded to Washington late in the 2016-17 season.

Shattenkirk, whose contract was bought out by his hometown New York Rangers this past summer before he landed with the Lightning for one year and $1.75 million in the summer, still has plenty of friends on the Blues roster and spoke with a number of them after winning the Cup.

"Absolutely. I gave them their time obviously to sober up this summer," Shattenkirk said. "I think August 1st we all talked, but I still have a lot of my closest friends over there. I was thrilled for them and what they accomplished. I've always said if it's not going to be me, I want my friends to win it.

"I think just knowing the city as well and knowing the hunger for a Stanley Cup and what they were waiting for, for so long, you talk to a guy like Osh [T.J. Oshie] and all the guys who were here before that didn't do it here, but we know what it means to this city and I think in that respect, it gave us joy knowing that it finally happened."

-- I'll have more on Shattenkirk's story since he's left St. Louis, a bit of an empty feeling knowing he wasn't part of the Cup-winning team, his start with the Lightning and feelings of having his contract bought out in a story posted later. --

Klim Kostin will get a second look with the Blues, his second NHL game after making his debut on Saturday against Anaheim.

"I thought he did well," Bozak said of Kostin. "First game there's always going to be nerves. It's obviously a different style of play than what he's been playing throughout the years, so it takes a little bit to get used to, but you were able to see his speed, his strength, the way he handles the puck. As he gets more comfortable, he's going to get better and better. He's going to be a really good player for a long time."

Kostin logged 11:45 ice time with two shots and four hits in the game.

"Same thing I see after watching tape. He just brings the kind of element that we like," Berube said of Kostin. "He's a big guy, finishes his checks. He can skate and shoot, goes to the net. For his first game, I thought he did a really good job and I'd like to see him again.

"I think for him and for the organization and our team, we've got to see what we've got here. So I'd like to see him again."

Andrei Vasilevskiy will start in goal; Curtis McElhinney will be the backup.