Maroon still open to return to Blues if opportunity is there

Even though the odds looks unlikely for the Oakville native, he isn't closing the door to possibly return to the Blues next season.

ST. LOUIS — It may not be open much, but Pat Maroon hasn't completely closed the door on his Blues career.

On the day in which he started out eating Cinnamon Toast Crunch out of the Stanley Cup with his son Anthony, paying a visit to where he played inline hockey at All American Sports Mall, then dipping toasted raviolis in marinara sauce at his fiancee Francesca Vangel's family business, Charlie Gitto's in downtown before calling it a day at a family friend's lakehouse in Hermann, Mo. 1.5 hours from St. Louis -- Maroon talked about his employment status at the moment.

But in all seriousness, even though it looks bleak for the Oakville native who brought the Cup to some of his grassroots as a kid growing up in St. Louis on his day with the Cup, the 31-year-old unrestricted free agent, who signed a one-year, $1.75 million contract to help the Blues win their first Cup in the 52-year history of the franchise, isn't closing the door to possibly return to the Blues next season.

"I would love to be with St. Louis. I would love to play here again," Maroon said. "... Me and Doug talk. We've had conversations and I think it's tough right now. A lot of restricted free agents right now and everyone's trying to find their number right now. The cap really didn't go up. I'm just enjoying it. I'm just going to take the time and really soak it all in. I know I've got a lot left in the tank, a couple years. I've got three solid years I can give someone." 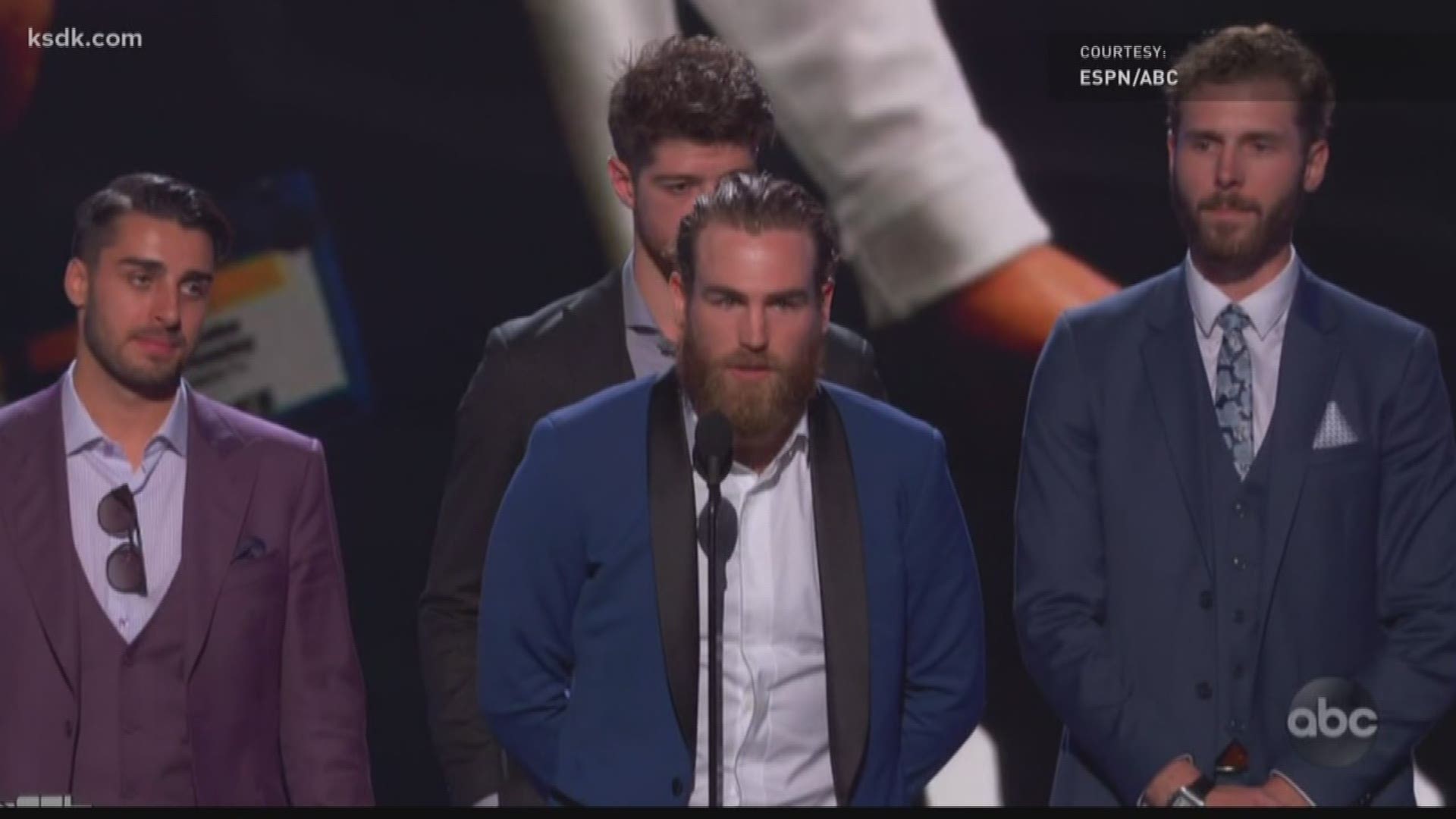 RELATED: The Stanley Cup is back in St. Louis

In a perfect world, the Blues would be able to afford Maroon a contract to strengthen an already deep roster, but a few factors play against his return.

First, the Blues have just roughly $9.2 million in cap space to sign restricted free agents Joel Edmundson, Oskar Sundqvist and Ivan Barbashev. Right now, they sit at just over $7.1 million available but three of those contracts (Mackenzie MacEachern, Derrick Pouliot and Jordan Schmaltz) won't count against the NHL's cap space once those three RFA's are signed. And with the likes of Zach Sanford and Sammy Blais signed to one-way contracts this year and the likelihood of increased roles for each and the amount of money that would be available to consider bringing Maroon back, would it work, and would it make sense?

But how much money would be available to bring back Maroon and how much term he'd be willing to sign for is the question that lingers. If it's not with the Blues, then Maroon, who cemented his legacy in St. Louis when he scored the double-overtime goal in Game 7 of the second round against the Dallas Stars, feels he's got game left for whoever wants his services.

There were some early rumors that the Alberta teams, Calgary and Edmonton, where Maroon scored a career-high 27 goals in 2016-17 playing with Connor McDavid and Leon Draisaitl, had some interest. But both those teams made one of those rare rival trades, swapping underachieving forwards Milan Lucic and James Neal on Friday.

"I'm ready to compete and play for any team that wants me," Maroon said. "I'm a guy you can probably use in the locker room, a good veteran guy. I don't really pump my tires up too much, but I feel like I've done a good job of bringing guys together and being a locker room guy. I think anyone can use me right now."

Maroon finished with 28 points (10 goals, 18 assists) in 74 regular-season games last season and seven points (three goals, four assists) in 26 playoff games after a rough start to his return home; he finished strong playing on a line with Tyler Bozak and Robert Thomas, and that line, when healthy, drove the Blues' offensive zone stats and possession time.

As for his day with the Cup, it's a culmination of the trials and tribulations that the Blues as a whole went through to win it all after being in last place on Jan. 3.

"It's been fun," Maroon said. "It's obviously a good day, but a special day at the same time. It's like planning a wedding to get this thing and have everyone see it. It's been good though. It's just unfortunate I have to do a lot of private events or else the whole city of St. Louis would be, as you can see out front, there's a couple thousand people waiting. It's been fun though.

"What Doug (Armstrong) has done for this franchise for so many years to bring a Stanley Cup back (after) 52 years, it says a lot about this city, what we've been through. And I think we can say it's a hockey city now and not the baseball city."

RELATED: Cusumano’s column | Hockey is forever changed in our town