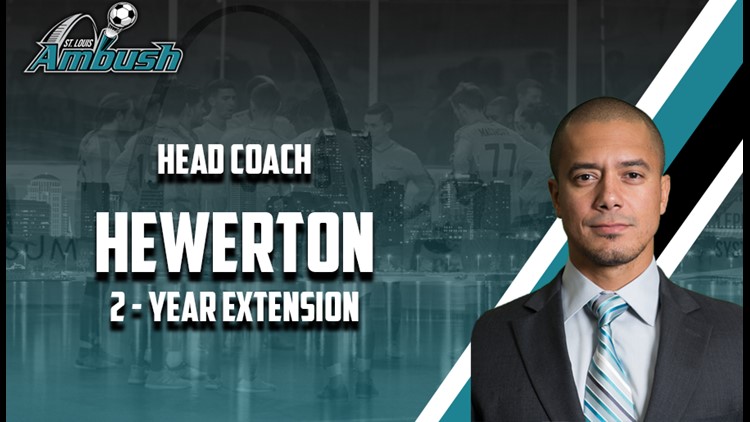 April 16, 2018 — St. Charles, MO (April 16, 2018) – The St. Louis Ambush have signed a deal with Head Coach Hewerton Moreira that will keep him at the helm of the team through the 2019-20 season. The 2017-18 season was Hewerton’s first with the team. Per league and team policies, other details of the agreement were not announced.

During Hewerton’s first season as Head Coach of the Ambush, the team improved from a 1-19 season in 2016-17 to 3-19 in 2017-18. While 19 losses doesn’t necessarily look good on paper, the team was competitive in many of those games, losing 11 contests by two goals or less. Other statistical improvements during Hewerton’s first season in charge of the Ambush were average goals per game, average goals against per game, power play goals and penalty kill percentage.

“Neither Hewerton or myself are satisfied with a 3-19 season,” Ambush CEO Shelly Clark said, “but I feel we’ve definitely turned the corner and are headed in the right direction under his leadership.”

Clark added, “Hewerton has demonstrated his commitment to the Ambush organization by signing a two-year contract. I feel it was important for the team to get the coaching situation resolved now so those players who are free agents during the off-season will know who they will be playing for next season if they are considering signing with St. Louis.”

Hewerton coached the Cedar Rapids Rampage United outdoor team two seasons and the indoor Rampage during the 2016-17 season. The Rampage United went to the championship semifinals both seasons, while the arena Rampage improved from five wins in 2015-16 to 12 in 2016-17 under Hewerton’s guidance. As a player, he won three championships during his seven seasons with the Milwaukee Wave, where he played for Keith Tozer, the winningest indoor soccer coach of all time.

Hewerton was a player-coach for the Ambush last season. As a player, he ranked third on the team in goals scored and first in assists. His status as a player for the 2018-19 season has not yet been announced, although he has indicated that he would like to play at least one more season.

Hewerton said, “I’m extremely happy and excited to renew my contract for two more seasons and for being part of this amazing organization. I am looking forward to next season and am already working hard to make it successful.”

The St. Louis Ambush will kick off their 2018-19 season in early December. The season will consist of 24 games, with 12 at home at the Family Arena in St. Charles. Keep up with Ambush news during the off-season by following the club at their official website, stlambush.com and on Facebook and Twitter.