One car was seen floating down a makeshift river and drivers had to be rescued from the quickly rising water. 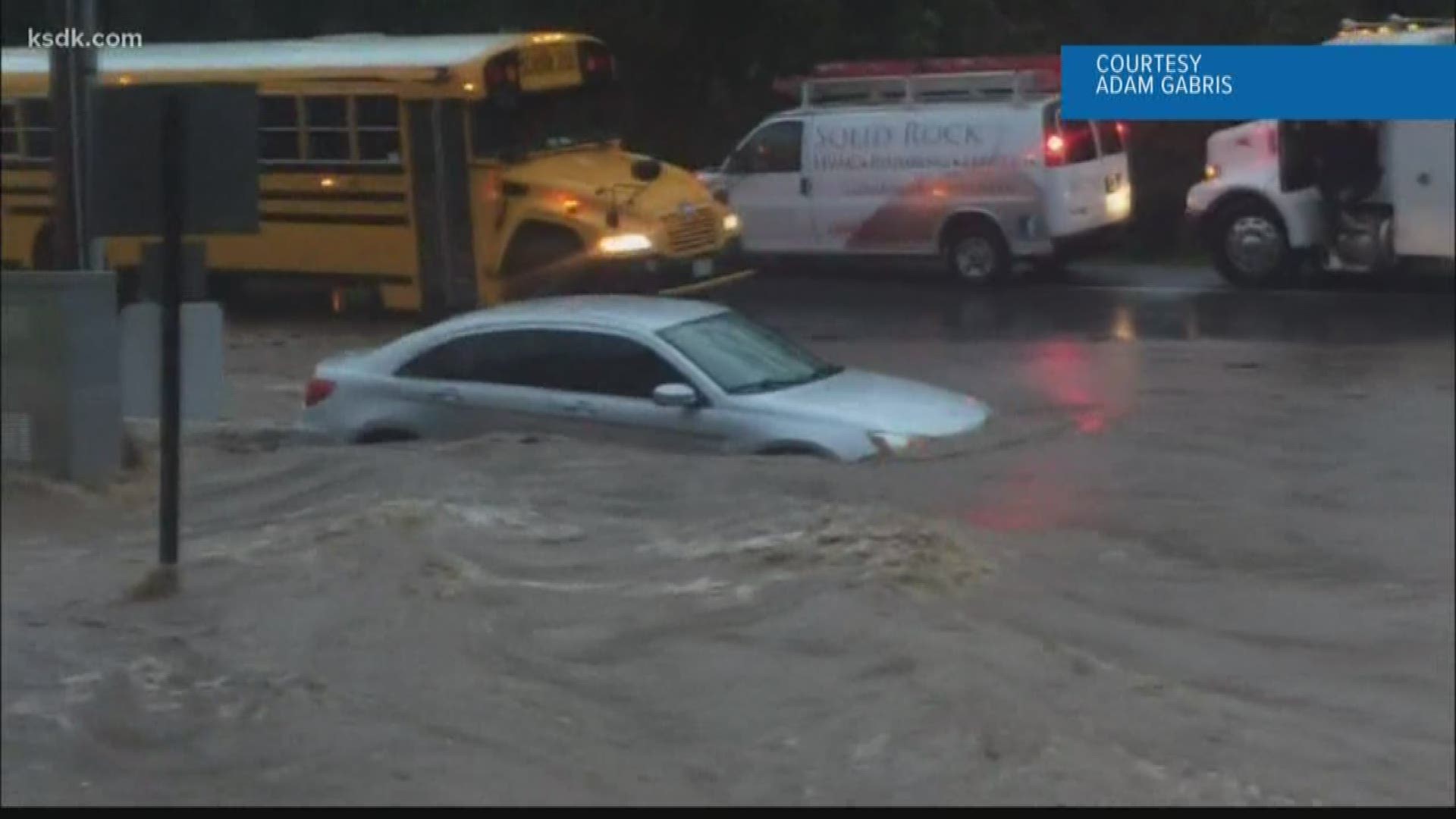 A flash flood warning was in effect during the morning commute for most of St. Louis County, the city and areas west. The warning was allowed to expire at 10:15 a.m. Some areas reported getting rain at a rate of 1-3 inches per hour.

Eureka was one of the hardest-hit spots.

Along Highway 109, drivers watched as a car was swept away by flash flooding along the roadway. Video from Mary Schmitt showed the car floating down the makeshift river. It's unclear at this time whether anyone was inside.

Photos from Pearson show someone standing in water that was shin-deep.

5 On Your Side reporter Rhyan Henson said there was extensive damage on the field. He reported the softball team is supposed to start playing games next week.

Downtown Eureka and the business district were hit by heavy flash flooding just last month. O'Dell's Irish Pub & Ale House encouraged the community to come out and support their business and others in the area.

'We are going to be open at lunch come hell or high water. Please don't avoid Old Town today. Everyone has suffered enough. The businesses here need your support.'

The westbound lanes of Interstate 44 near Antire Road were closed Monday morning because of flooding on the road. The lanes reopened to drivers by 10 a.m.

Video sent to 5 On Your Side by a viewer showed pickup trucks and box trucks pushing through the deep water in the westbound lanes. The water was so high, it started spilling over the concrete median separating the westbound from eastbound traffic.

RELATED: Traffic alert | I-44 WB closed near Eureka due to flooding

In the Valley Park area, 5 On Your Side photojournalist Joe Young was on the scene when emergency crews rescued a woman who was stuck in flash flooding. It happened at Meramec Station Road and Smizer Mill Road.

The woman was trapped on the top of her car.

Fenton and Valley Park fire crews responded to the scene. They waded out into nearly knee-deep water with a raft. They were able to safely get the woman into the raft and were seen safely walking her back to the roadway.

In Franklin County, the entrance to the St. Albans subdivision is completely flooded out. Video from a viewer showed water flowing down the road. In the video, she's heard saying she's never seen flooding like this in that area before. Emergency crews are on the scene blocking off the roadway to keep drivers from going into the floodwaters.

Near Eureka, Fox Creek Road looks like a creek itself. Water was seen rushing down and across the road toward nearby homes.

Along that same stretch of road, the water was so powerful, a horse was swept away. The Eureka Fire Protection District reported a firefighter/paramedic spotted 'Smokey' the horse down the road from his pasture in thick woods. He suffered a few bumps and bruises and was wet and scared but okay, the fire district told 5 On Your Side's Rhyan Henson.

Highway 141 under Interstate 44—a known trouble spot when the rain comes down hard and fast—has been closed since 6:45 a.m. because of deep water on the road. At least two cars got stuck in the fast-rising water.