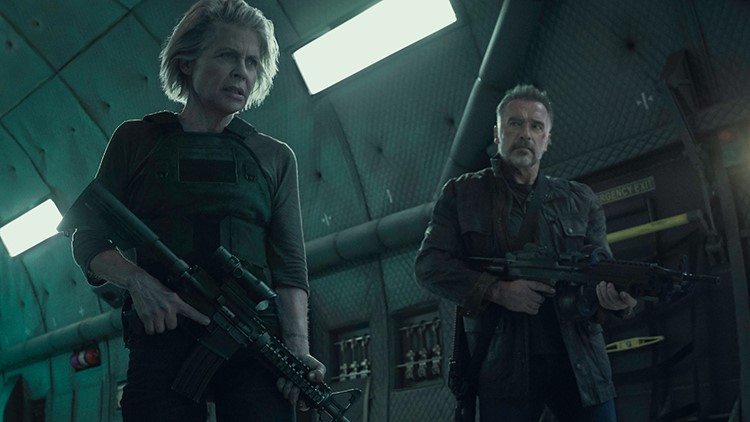 Some things just don't get old.

A hot cup of coffee on a cold morning.

A double cheeseburger and a willing lager on a summer afternoon.

Arnold Schwarzenegger with a machine gun in his hand dispensing justice in a James Cameron-produced flick.

Or save it until the next machine-related threat came along.

In "Dark Fate," Gabriel Luna's Rev-9 is the super-enhanced killer robot sent to kill young Dani Ramos (Natalia Reyes), and Grace (a breakout role for Mackenzie Davis) is the robot sent from the resistance to stop him. Luna's killer can split into two different robots, take the shape of whatever he touches, and can come back from just about anything. Davis' human-robot hybrid is his match though, setting up some killer fights throughout the film.

Cameron's touch can be felt throughout the two hour film, starting with the return of Arnold and Hamilton, and the story credit he shares with Charles H. Eglee, Josh Friedman, David S. Goyer, and Justin Rhoades. While the latter three's script has some holes in it-most notably in connecting the film from 28 years ago to this new one-the Cameron effect is paramount throughout this latest production.

A killer twist (it's jaw-dropping bold and in the first five minutes) sets the story in motion, which hurls Grace and Dani against the Rev-9, and reunites the potent duo who make the franchise what it is. There's a nostalgic kick to seeing Schwarzenegger and Hamilton trade lines, zingers, and bounce the past and future off each other. Once upon a time, Schwarzenegger was the killer sent to dispatch her, and then help save her, so the baggage is apparent when they must team up with Grace to help save the day again.

Cameron forges a great bond here with director Tim Miller ("Deadpool") here, resulting in some of the best action sequences of the year and in any "Terminator" film. Seeing Schwarzenegger go toe-to-toe with Luna's new age killer on an airplane and in a warehouse brings back a thrill from seeing him do the dance with Patrick's mad man nearly three decades ago. Hamilton holds her own in the action sequences and brings a powerful pathos to her portrayal of an iconic role. Like Arnold, this is the role that shaped her career, someone she probably shares a piece of her real life with.

If you ask me what a "Terminator" film has to deliver on, it's the action. Miller's grasp of modern technology and Cameron's wizardry creates some truly memorable sequences, and that's the key ingredient here. I don't need a multi-faceted story or powerfully moral that shutters with depth. There's a bad bot, a good bot, and the fate of the world hanging in the balance. Boom! That's the meat and potatoes in this franchise: the action scenes. In this film, they are relentless, endless, and exhilarating. You won't find a good time to go to the bathroom, let's put it that way.

"Dark Fate" doesn't forget about the out of nowhere humor either. Remember the funny bits with Schwarzenegger's T-100 in T2? Let's more of that here. What I felt was missing in the last few "Terminator" films was the levity that made the second films so great. When the crew meets up with Schwarzenegger's "retired" robot, where he is carrying the name of Carl and runs a window drapes service, there are some powerful moments and very funny moments-and it's all due to the Austrian. The man still has an ability to get you going in his 70's.

I also felt recent "Terminator" films wasted Schwarzenegger, allowing him to show up and clock his work ticket, and then leave for the less-interesting performers to do their thing. As much as I like Emilia Clarke and Jason Clarke, "Terminator Genisys" was a flagging flop of an experience. "Rise of the Machines" isn't as good as it was over 20 years ago, and we'd all be better to agree "Salvation" never existed. "Dark Fate" nails the feel and tone of a "Terminator" film, thus creating a rousing spectacle of a film. Will you feel a little weepy in the final moments of a robot wars film again? You sure will.

Davis is the true breakout star here, giving Grace a soul as well as wicked fighting abilities. From the moment she falls naked to the Earth and picks up a lead pipe to smash Luna's bot with it, she commands the screen. It's a role that needed some blunt force, and Davis brings it here. If you didn't know her name before the credits, you won't forget it now. She was the one who located Matt Damon on Mars in "The Martian," but she's also the preserving force of the future now as well.

Luna doesn't match Patrick's brilliantly tone-deaf evil, but he does have a few moments of his own here to give the Rev-9 some kick. A scene where he goes through a metal detector and tells the guards who ask about weapons on his person, "My whole body is a weapon," is well-played and adds a juicy layer to his menacing physicality. He holds his own in the fights with Arnold and is someone you won't get tired of.

Reyes doesn't stick the landing with Dani right away but grows into a role that becomes more important and expands as the film grows in age.

Here's the thing. When the movie ended, I was energized and ready to watch it again. You could have told me James Cameron wasn't involved and I wouldn't believe you. He returned to the franchise and brought with it the prestige feel of a "Terminator" movie. This is the sequel we've been waiting for. It lived up to the hype and left me wanting more.

A solid combination of wildly entertaining action, some pathos, humor, and a few powerful moments make for a grand time at the movies. The Oscar films may be moving into the neighborhood, but that doesn't mean you can't find a little fun.

"Terminator: Dark Fate" delivers the fun that I wanted.

RELATED: Opinion | The 10 worst "paycheck" performances at the movies

RELATED: Review | Why 'Pain and Glory' is Pedro Almodovar's loving tribute to the power of filmmaking

RELATED: Review | Top flight acting and an unhinged originality brighten up 'The Lighthouse'

RELATED: Review | Poised to be something different, 'Black and Blue' is sadly a misfire