"We're trying to figure out what the heck this thing is when from the kitchen she yells, 'Stop! I think that might be a bomb!'" 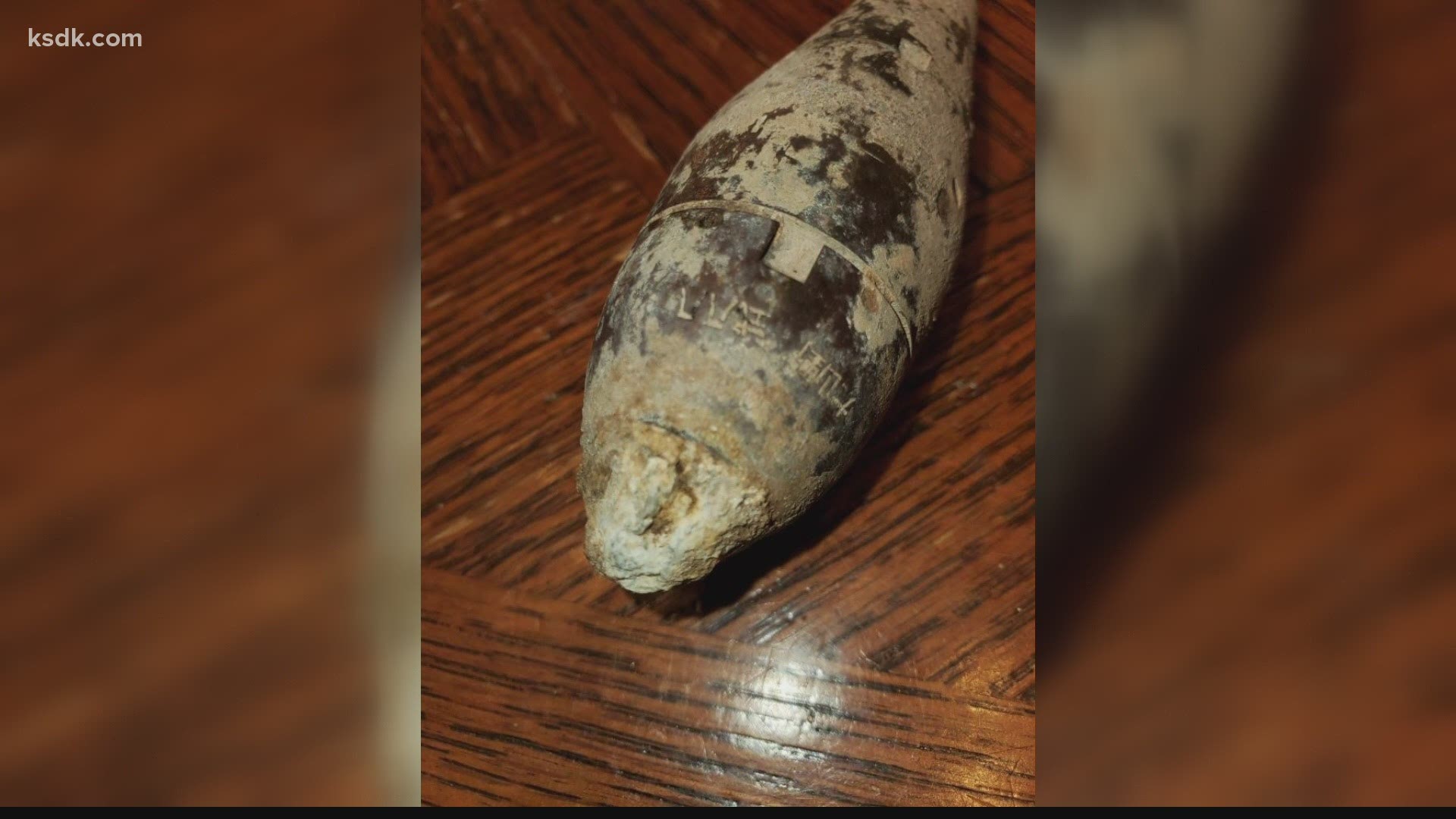 BARNHART, Mo. — Sam Coffey and his wife Pamela Lovett were out in their yard working to prevent some erosion on their rural property when Pamela noticed a strange object in the ground.

"It was a little bit larger than the palm of my hand," said Lovett. She added that she had on her gardening gloves and the mortar left rust marks on them.

Lovett said she took the small cylinder-shaped object into her kitchen and started washing it.

"She sees this Japanese lettering on it. The next thing you know I'm sitting at our dining room table scraping on it with a steak knife trying to clean it out," laughed Coffey. "We're trying to figure out what the heck this thing is when from the kitchen she yells, 'Stop! I think that might be a bomb!'"

A Barnhart family found a live bomb from WWII in their backyard this weekend -- check out the Japanese writing!

How in the world did it get there? My story is on @ksdknews at 10 -- watch on the app or https://t.co/JjUqTohGT0 pic.twitter.com/m6Kfy2ipE6

Coffey said his wife used Google Lens, an app that helped them determine that it was time to call the police.

Turns out their little find was a World War II-era bomb from Japan. How it got there is anyone's guess. Ultimately, the couple said Jefferson County sheriff's deputies, the ATF and the Air Force responded to their house for several hours, blocking the roads, and forcing the family to hang out in the back part of their house in case it exploded.

"It wasn't just the shell," said Coffey. "This thing was live. They confirmed it."

The St. Louis Regional Bomb and Arson Unit removed the mortar from the family's property.

Lovett said she hopes the bomb unit will allow the family to watch it get destroyed assumingly later this week or at least give some shrapnel back as a souvenir.

Now that the bomb is gone, and everyone is safe, the family jokes they should buy a lottery ticket.

"I am incredibly grateful to be able to stand here and tell the story with all of my limbs still attached," said Coffey. "This is why women live longer than men because here I am, scraping a bomb with a steak knife when my wife makes me stop and call the sheriff's department!"

Coffey said the deputy told him he needed to take his wife out to a steak dinner. "I'm very grateful to my wife right now," he said. "I do have life insurance so I guess she's kind of missing out."