'I couldn't believe it was happening' | Black St. Louis officer testifies about assault by white officers

Luther Hall was working undercover during a 2017 protest 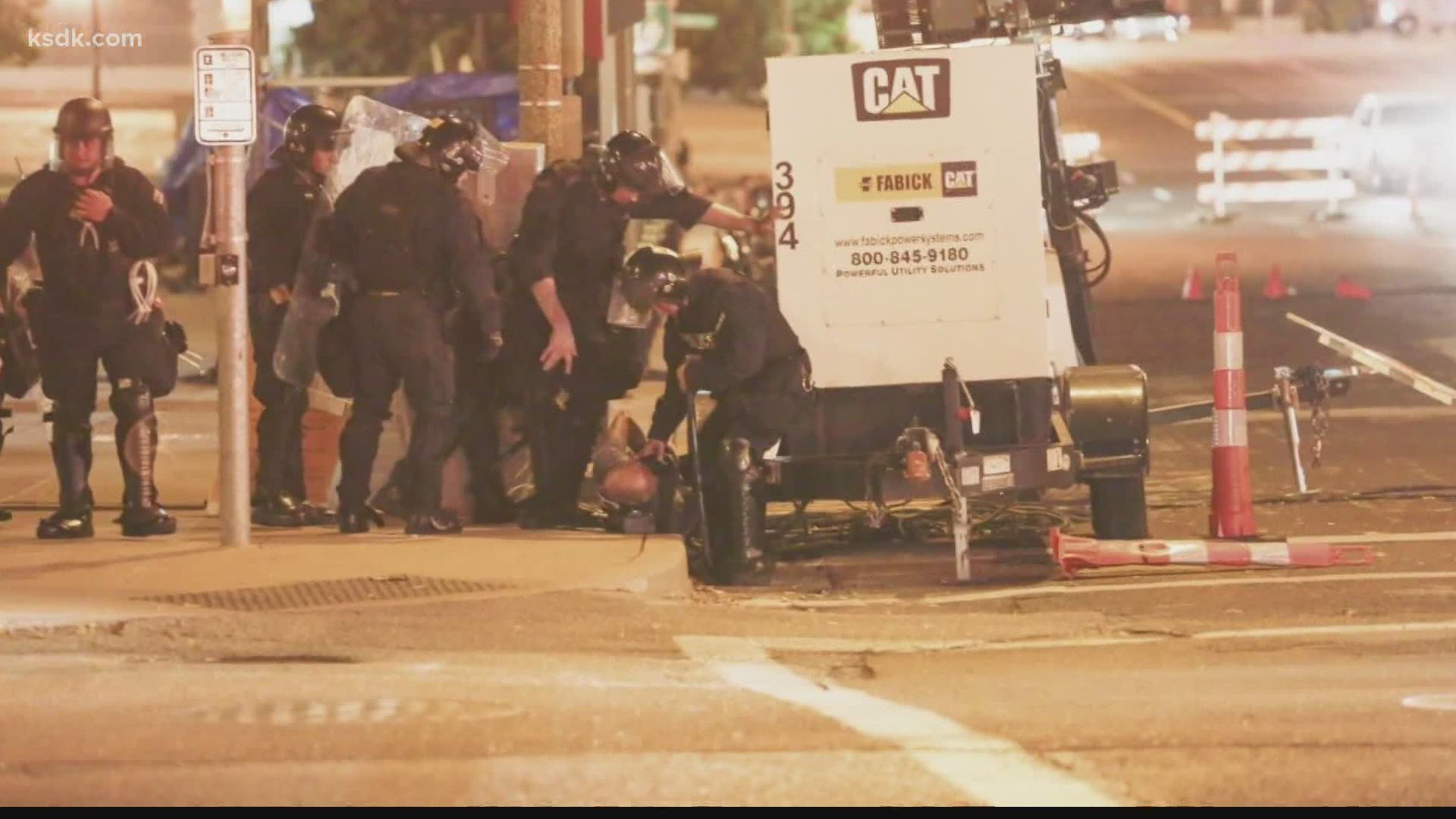 ST. LOUIS — An emotional Black St. Louis police officer took the stand Thursday where he described how multiple white police officers assaulted him as he worked undercover during a 2017 protest.

“It was a free-for-all,” Luther Hall said, his voice cracking. “I could feel nothing but boots, fists and sticks slamming into my body."

Hall described himself as a 25-year veteran of the force, who had most recently been assigned to the Problem Properties Unit where he and his partner, Detective Lewis Naes worked undercover to investigate dogfighting rings as well as liquor license violations.

On Sept. 17, 2017, Hall and Naes were working undercover to document crimes happening during protests that followed the acquittal of former Officer Jason Stockley. Stockley had been charged with murdering a Black drug suspect in 2011, but not charged by local prosecutors until five years later.

In all, five St. Louis police officers have been indicted for their roles in assaulting Hall on the night in question.

Two of them, Randy Hays and Bailey Colletta, have already pleaded guilty.

Three of them, Dustin Boone, Christopher Myers and Steven Korte, are on trial this week in federal court.

Boone and Myers are no longer with the department. Korte is still on the force.

Credit: Trial documents
In a photo released as part of trial documents, Luther Hall is seen on the ground surrounded by St. Louis police officers.

Hall’s voice cracked several times during his testimony as First Assistant U.S. Attorney Carrie Costantin questioned him about the assault.

He said he had been arrested before while working undercover by St. Louis police, and catching a punch or a smack was just part of it. But, he said, he had never been beaten.

“Did you ever fight with the police?” Costantin asked.

“Resist the police in any way?”

“What are you thinking when this is happening to you?”

“I couldn't believe it was happening.”

“At some point I feel my arms being forced behind my back and the flex cuffs go on.”

Hall's voice cracks as he recalls the following: "I can just remember my face felt warm and then at some point, someone grabs my body, rotates it to one side and runs hand down front of my body, waist band and pushed over to other side. They run their hand down my body."

Defense attorneys have accused Hall of not showing his hands, and say that’s why you can hear officers shouting “Show me your hands,” during the arrest attempt.

“Where were your hands?” Costantin asked.

“My hands were out in front of me,” Hall said, adding that he had his phone and a camera in both hands stretched in front of him. “It seemed like forever, but maybe it was a minute or so.

"I was being told to put my hands behind my back, but I couldn't because people were standing on my hands and my arms.”

Costantin also asked Hall to describe what he was wearing, which he said included a dark T-shirt with a skull type of pattern on it that was a "schmedium" -- a slang term he and his partner made up to describe something between a small and medium size.

He said it was a very short shirt, which he wore to show protesters he was not a cop, and to show cops he wasn't armed.

Costantin also asked Hall to describe the health problems and injuries he sustained from the assault.

Hall said in addition to a lacerated lip, his jaw was injured so badly that he couldn't eat and lost about 20 pounds. He said the rapid weight loss caused gallstones to develop, which required three procedures to remove. He said he thought he was having a heart attack when the stones were pressing on his pancreas, and he now suffers from chronic pancreatitis.

He said he has had to have surgeries to repair damage to his spine. At one point he showed the court a scar on his neck from where doctors inserted a plate and six screws to help alleviate some of his nerve pain.

Defense attorney Scott Rosenblum, who is representing former Officer Christopher Myers, then questioned him for close to four hours grilling him about how he made different statements about what officers were involved in the assault and what happened to him during the assault at different times.

Hall said the officer who took the camera off his neck was the same officer who kneed him in the back while he was sitting on the curb in flex cuffs, trying to alleviate some of the pain in his back. Rosenblum's client, Myers, is the one accused of doing so.

Rosenblum walked Hall frame-by-frame through photographs showing Myers was not the officer standing behind him when he was sitting on the curb, and tried to get Hall to admit that it appeared a different officer had kneed him in the back while Myers was standing in front of him.

The exchange led to some tense moments between Rosenblum and Hall, as Hall said it looked like that officer's knee could have been between him and a different person that had been arrested alongside him.

Rosenblum also showed photographs of how far away an object appearing to be Hall's phone was away from him at the time of the assault. The phone captured an image of Myers' face as he picked it up.

Hall would only say he could see an object that "could possibly be my phone."

At one point it disappears from the photos, and Rosenblum said his client could be seen kneeling down beside Hall to give it to him. Myers is charged with trying to impede the investigation by destroying Hall's cellphone.

Rosenblum also took Hall through FBI reports in which Hall described protesters as "anarchists" and "Chesterfield kids." (Chesterfield is a St. Louis suburb with a predominantly white, upper-income population).

And noted how Hall was relaying information back to police headquarters saying, "They're going to (expletive) up Washington, where are you guys?"

Rosenblum also suggested Hall got the names of the officers involved in the assault as well as what they did during the assault from his close friends in the department who conducted an "off-the-books investigation" based on nothing more than rumors.

At one point, Perry adjourned the courtroom for a 15-minute break telling the attorneys it was obvious to her that Hall was in pain after having sat on the stand for so long.

Attorney John Rogers then began his cross examination of Hall after Rosenblum closed his with video showing Hall standing up and walking into an armored police vehicle.

Rogers said the first and only time his client's name, Steven Korte, has come up in the trial so far was when Rosenblum read the text messages from Hall's friend who said Korte was involved in the assault.

He then asked Hall if he recalled ever being struck in the front of the face with a boot or a shield, which led to a tense exchange between them.

"I was struck in the side of my face with a boot possibly," Hall said.

"In front of your face?" Rogers asked. "Do you have independent recollection of a seeing a boot come into your face?

"I didn't see a boot, that doesn't mean I wasn't struck with one," Hall said.

Rogers then asked Hall why he told the medic who stitched his lip he "fell" when the medic asked what happened to him.

"That was a sarcastic remark," Hall said.

"What purpose do you have for lying to the first person you come into contact with about the incident?" Rogers asked. "Do you have an agenda?"

"I had just been assaulted by several police officers at the time, I had no idea where this was going, what the department was going to do, the officer who was with me knew exactly what happened so I said it sarcastically," he said.

Rogers then asked Hall if he was in pain and needed a break.

"I'm in pain and a little annoyed," he said, and Perry adjourned the hearing.

Rogers is expected to continue his cross examination Friday, followed by attorney Patrick Kilgore who is representing Boone.

5 On Your Side's Christine Byers is inside the courtroom following the trial. You can read the latest developments on her Twitter page here.