The incident comes less than two months after a Feb. 6 uprising that left a corrections officer hospitalized 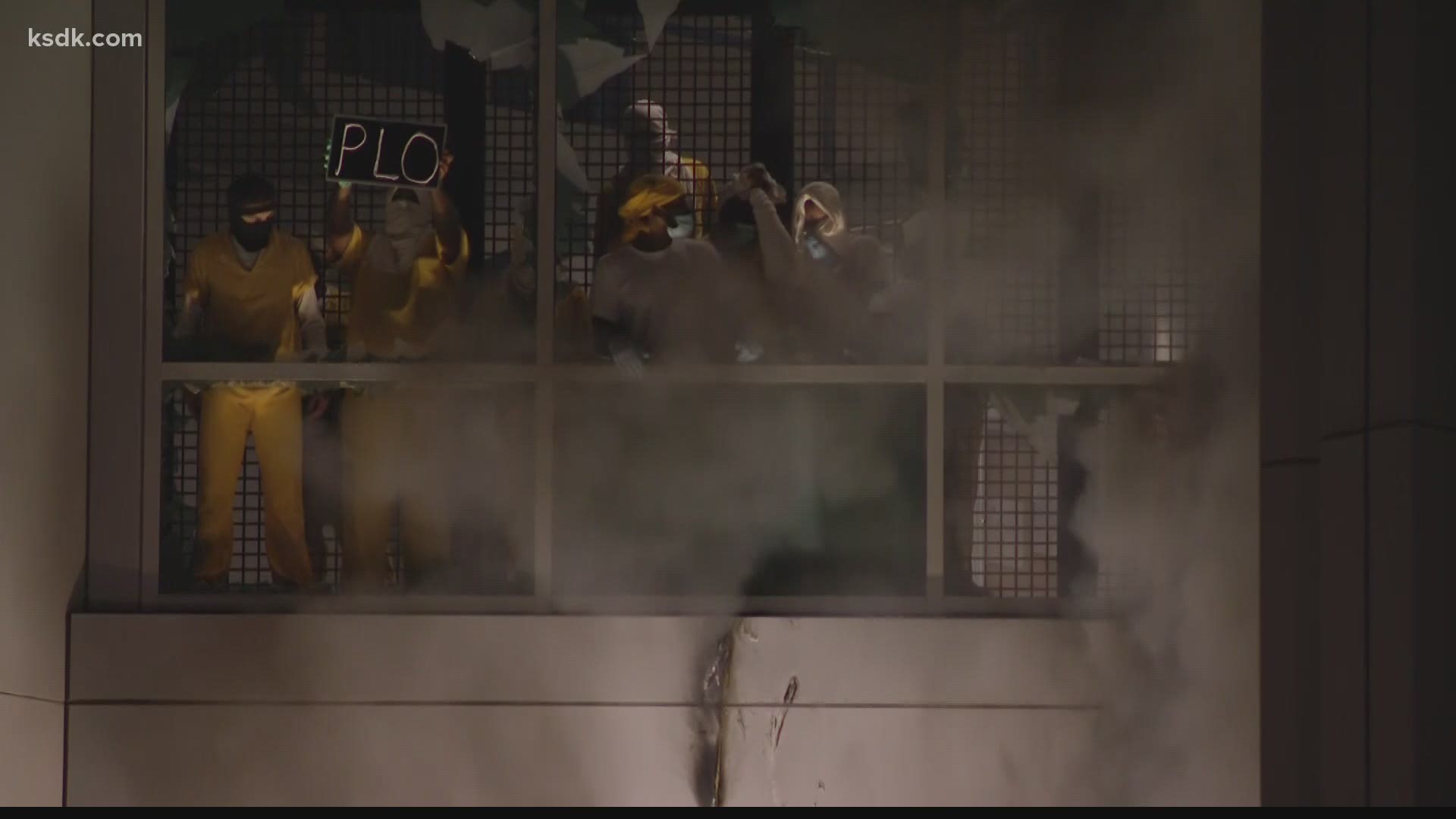 The St. Louis Metropolitan Police Department sent out an all-points bulletin across city police radios Sunday night after inmates on the third floor of the City Justice Center covered cameras. A short time later, inmates began breaking the windows and throwing things onto the street. At around 9:30 p.m., smoke was pouring out of the broken windows.

The St. Louis Metropolitan Police Department's Civil Disturbance Team was among the officers responding to the scene Sunday night.

By around 10:20, the inmates had moved away from the windows, and police officers could be seen inside the windows looking around with flashlights in hand.

1 / 19
UPI
Detainees begin breaking windows in the St. Louis Justice Center during a riot in St. Louis on Sunday, April 4, 2021. About 60 inmates were able to escape their cells to break windows, yell to people on the streets and set small fires. Police finally gained control after about 15 minutes. A similar riot occurred in February. Photo by Bill Greenblatt/UPI

Once the inmates were moved, firefighters worked to put out the fire below, which flared up at around 10:30.

At around 11 p.m., inmates broke third-floor windows on the other side of the jail and started throwing things from the windows again.

This is *not* under control pic.twitter.com/SweX6MQpVP 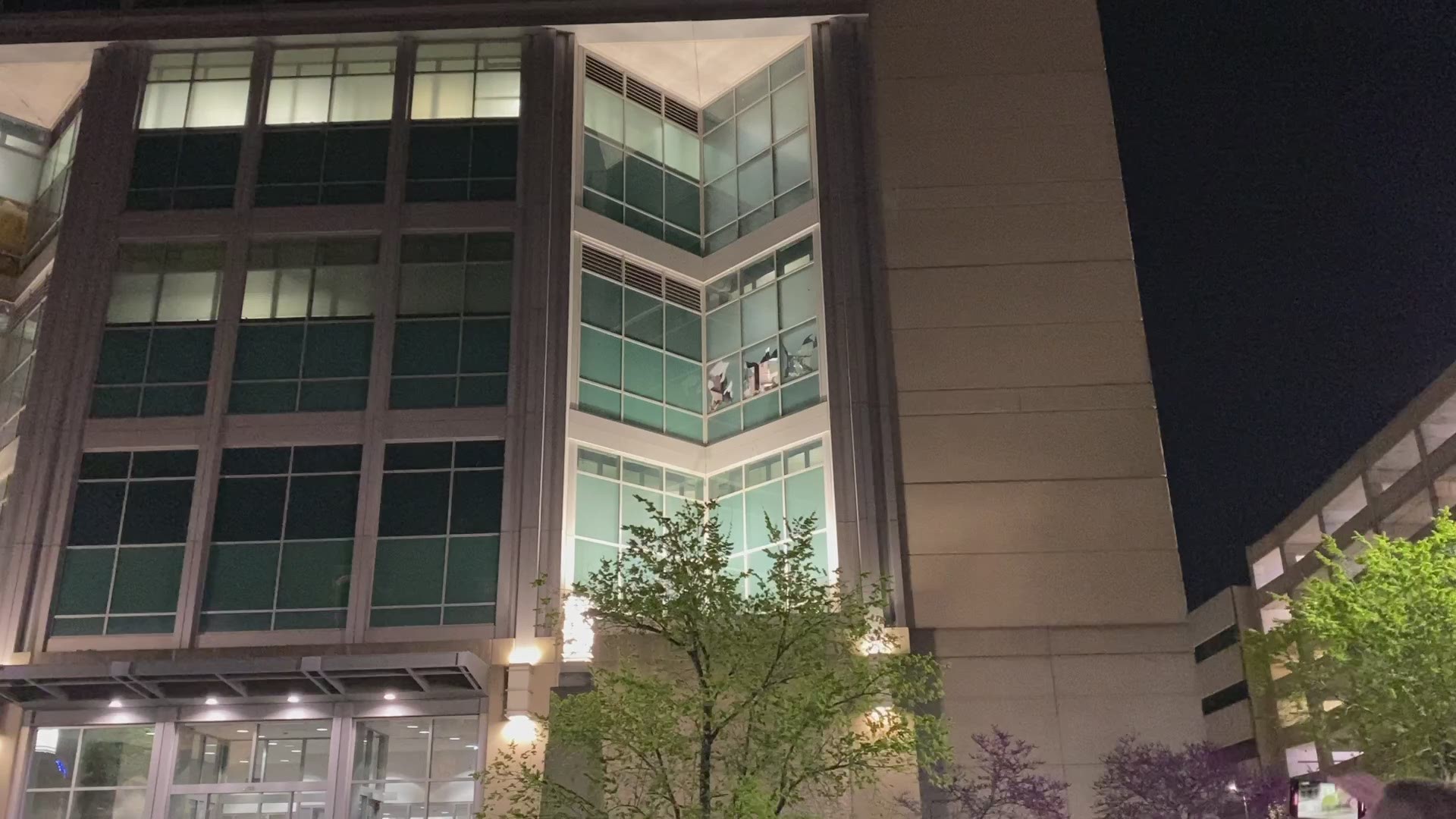 At one point in the uprising, inmates threw a chair from the windows. A man was seen dragging the chair into the street and sitting on it while watching the scene unfold. The man took the chair with him as he left Sunday night, and 5 On Your Side's Casey Nolen asked him what he thought of the incident.

Warning: The video in the tweet below contains language some readers may find objectionable.

The “why” from the perspective of a man leaving with a chair from the #STLjail pic.twitter.com/m8GkzZRGHU

At around 11:55, the sound of saws could be heard as workers began the process of boarding up the windows.

I can see some in cuffs inside. And hear a circular saw as workers board up the city jail for the second time in about two months #STLjail pic.twitter.com/bjGgS6uQ6g

While the uprising continued Sunday night, St. Louis Treasurer and mayoral candidate Tishaura Jones said there was an "immediate need for change in our city’s justice system" that needed to include a clear chain of command for the jail.

In addition to my tweets last evening, here is my full statement on the uprising last night at the CJC: pic.twitter.com/jgudbVY9ub

Mayoral candidate Cara Spencer also sent out a statement early Monday morning saying a change is needed in the jails and in the position of public safety director.

"As mayor, I will launch a full investigation into the city’s two detention facilities to ensure that staff and the city residents incarcerated there are safe. New leadership is needed in the post of Public Safety Director and I will make this an immediate priority," her statement read in part.

Jacob Long, director of communications for Mayor Lyda Krewson's Office, provided this statement to 5 On Your Side early Monday morning:

"Earlier tonight, there were two violent and dangerous disturbances that unfolded at the City Justice Center downtown. They originated from two units on the third floor beginning at approximately 8:30 p.m. Detainees became non-compliant, covered security cameras, smashed windows, and destroyed property. I do not have any reports of any serious injuries at this time. The Corrections Division, SLMPD, the Sheriff's Office, and STLFD all worked together to respond accordingly and bring the situation to a resolution. Staff remains on site working to address clean-up and make repairs."

Krewson and other city officials held a press conference late Monday morning, which can be viewed in the video player below.

Dale Glass, the city's corrections commissioner, said there were no issues with the inmates throughout the day. Detainees had been participating in recreational activities and visits.

Glass said the uprising began around 8 p.m. when corrections staff took a meal break and stopped the detainees' recreational time. Detainees gained access to the windows and busted them out. Three or four people suffered cuts to their hands from broken glass, but they did not need medical care outside of the jail.

It is difficult to tell how many detainees were able to escape from their cells because security cameras were covered up.

"The number was relatively small but enough to create the havoc," Glass said.

He said his staff has been working to improve conditions for the detainees, including reinstating visiting times and adding more recreational time. About 20 additional staff have been hired and trained and he is looking to hire about 30 more.

"One of the things that concerns me in these kinds of situations is when the first events happened, we the public appeared to be condoning or justifying or lending cause to their behavior," Glass said. "I’m not judgmental about that issue, but it has a tendency to embolden. I’m not sassing that was anybody’s intent."

When asked about who is to take responsibility for the issues at the jail, Krewson responded: "The most important thing is to get the repairs done. We only get to look forward in this so that is what we are doing."

The incident comes about two months after inmates broke out of their cells and revolted. In the predawn hours of Feb. 6, 117 inmates at the downtown City Justice Center broke free from their cells.

They smashed windows, set fires and tossed chairs, a filing cabinet and other items through the broken glass onto the street four stories below. A corrections officer was briefly hospitalized.

It was the third uprising at the downtown jail since December, according to the Associated Press.

The incident sparked an investigation into broken locks at the justice center.

And Krewson appointed a task force to look into issues at the jail, including:

An I-Team investigation discovered the city’s Division of Corrections was about 72 guards short on the day 100 inmates at the city’s downtown jail attacked a guard and rioted.

The staffing issue is one of several the I-Team uncovered in internal memos since the Feb. 6 riot. The documents from police commanders to corrections officials including Commissioner Dale Glass summarized a multitude of safety concerns — staffing levels among them.