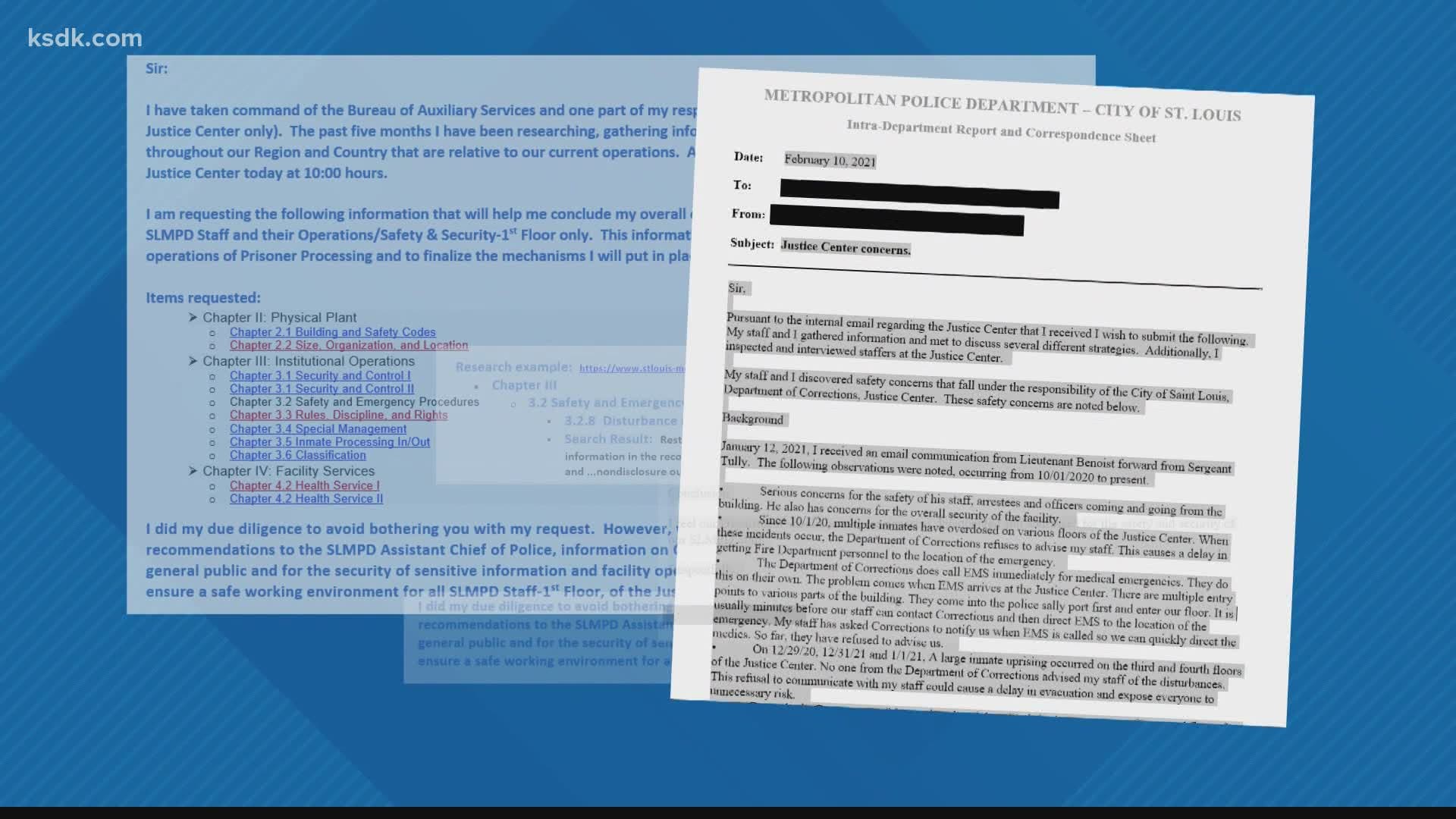 ST. LOUIS — The city’s Division of Corrections was about 72 guards short on the day 100 inmates at the city’s downtown jail attacked a guard and rioted.

The mayor’s spokesman Jacob Long told the I-Team the usual challenges like better pay and better benefits at jobs outside the city made hiring and retention difficult for the Department of Corrections, just like it does for most city departments that are short-staffed.

But the city’s Director of Personnel, Richard Frank, said there’s more to the story.

“A year ago, it was nearly fully staffed,” Frank said. “I’m disappointed about the lack of communication about staffing from the corrections administration.”

The staffing issue is one of several the I-Team has uncovered in internal memos since the Feb. 6 riot. The documents from police commanders to corrections officials including Commissioner Dale Glass summarized a multitude of safety concerns — staffing levels among them.

The Rev. Darryl Gray is leading a task force commissioned by Mayor Lyda Krewson to look into what led up to the violence and said he first learned of the staffing shortage from the I-Team’s report.

“That should have been a number one priority,” Gray said of staffing. “Making sure you had a full complement of personnel to do what you needed to do to keep people in the building safe and secure.”

Who is at fault?

The Criminal Justice Center, which is the site of the riot, and the Medium Security Institution, also known as the Workhouse.

Activists have been calling on city leaders to close The Workhouse for months.

In a Feb. 16 email, Frank wrote, “It appears the vacancies were being held for possible closure of MSI.”

In that email, Frank was telling Comptroller Darlene Green he had just received a request to fill 72 Division of Corrections positions from the city’s Director of Operations, Todd Waelterman.

That was the first request to hire anyone Frank said he received for close to a year — the last time the division was almost fully staffed.

But Waelterman says he asked Frank to hire 32 positions in June 2020, and didn’t get applicants until December. He asked to fill one vacancy in January, and another vacancy in February, according to documents he gave the I-Team.

“That’s how long and bogged down our (hiring) process is,” he said.

But why did it take a riot like the one that happened Feb. 6 to get the ball rolling for rapid-fire hiring?

“Without that full complement, detainees are not getting served, and it’s a security risk,” he said. “There’s no way in the world you should have one officer to, let’s say, 10 or 11 detainees it’s just too much.”

Now, the city is scrambling to fill the vacancies as fast as possible.

Waelterman asked the city for $1.2 million to pay Whelan Security to hire temporary guards. He said it’s money the city has because of the lack of guards.

Frank sent Waelterman 100 applicants – 80 of which were interviewed in one week earlier this month.

Also, this month, Frank and Greene, the city’s comptroller, took Waelterman to task for the contract with Whelan — saying the city’s charter requires the city to first hire permanent employees before paying private companies to fill any needs.

Now, the contract requires the city to dismiss the temporary private guards as they continue to fill those positions with permanent hires.

Waelterman said he estimates the city will have between 50 to 60 new guards in place by the end of this month, still 22 short of what he was seeking.

Waelterman said the jail population decreased during COVID, and the detainees housed there are only the most dangerous.

How many guards the city needs at one time depends on the jail population, he said.

Gray said he hopes to learn more about how the staffing levels got as low as they did, and noted the task force is looking to conclude its investigation soon.

“Who knew what when, that’s the age-old question,” he said.