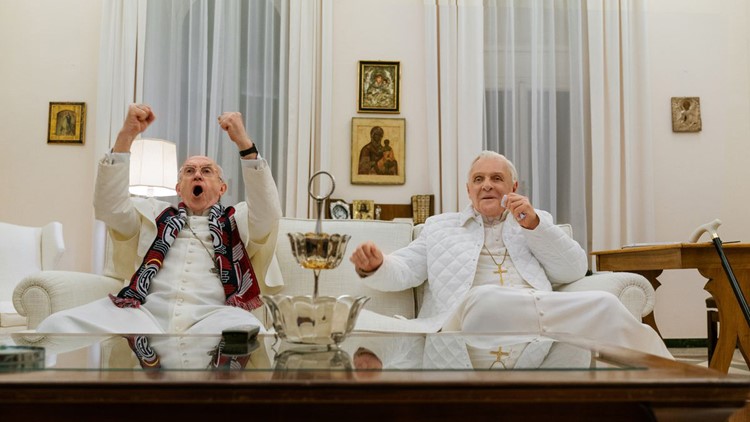 ST. LOUIS — "Mercy is the stick of dynamite that brings down walls."

What happens when your beliefs clash with the time-honored principles of your desired profession?

For Jorge Mario Bergoglio (Jonathan Pryce), the life of a Cardinal and Arch Bishop has grown too weary of a weight to bear due to a lack of reform in the church. With the entry of Pope Benedict (Anthony Hopkins), the Argentina native doesn't see the conservative nature of the Church changing, so he wants out. Bergoglio writes a letter of resignation, orders a flight to Rome, and is set to tell the new Pope he is done. And then the two meet and have a conversation that lasts days, during which time the pasts and true ideals of the two men-polar opposites in just about every facet of life-are put to the test and simultaneously unveiled.

The magic of Fernando Meirelles', who dazzled us with potent political thrillers such as "City of God" and "The Constant Gardener," new film, "The Two Popes," is that he doesn't preach or talk down to the viewer. It doesn't matter whether you are religious or not: this film will strike a chord with your soul. Pope Benedict was old fashioned, believing in the flawed yet time-honored virtues of the Church and its rigorous history. Bergoglio, a man of the people and full of charisma, wanted to think outside the box and challenge the Church to change. He wanted them to be open to homosexuality, birth control, and other testy religious stalemates.

But the two men find hidden meaning and ability in the other via conversation. Instead of hurling insults, they challenge each other to think radically, even if their own sensibilities can't initially handle it. You'll fall on one side of the other but find yourself hooked either way. They challenge each other over what seems like a 12 round fight where only words can be used for weapons. For a film with loads of dialogue, Meirelles' film never bores and is quietly riveting.

Everybody knows about the scandal surrounding Pope Benedict's time atop the Catholic Church years ago and how it led to his resignation, but you don't know the actual story behind it and how that event led to true change. With this film, Meirelles manages to strip away the title of Pope and simply show us two ordinary men volleying against two different types of compromise. As Benedict tells Bergoglio at one point, "You must remember ... you are not God ... you are only human."

This is a film carried by a pair of pros working at the top of their game. Pryce, who has been very good in several films before, is excellent here, showing us the beating heart of a reformer trying to break down tall, powerful walls. He doesn't just adopt the accent and mannerisms of Bergoglio; Pryce shows us the wide-eyed wonder of a man living with plenty of his own demons. It's the best work of his career, a performance for the ages.

Hopkins is nearly his equal, digging into not only the immovable object of Benedict's beliefs yet showing us how witty and funny he was as well. The two men share pizza, soda, beer, and wine over the course of their conversations, and the fodder allows Hopkins to play with all human emotions. Playing a guy who knows he will fall and can choose when it happens, the Oscar winner brings an elegance and stillness to his portrayal.

With the world watching over the Church and the media moving in, two men got to know each other. I mean, they really got to know each other. You can read a file on someone and know their history, but that doesn't tell you everything. That's why the performances are so key here. You need a couple performers who knew what they were doing. Pryce and Hopkins play movie chess here.

I want to mention Juan Minujin's work in the film as a young Pope Francis/Bergoglio. There are a considerable amount of flashbacks in the film, recanting Jorge's story and his rise from a young scientist to ambitious priest, and Minujin's work is superb. Together with Pryce, Minujin's acting in the younger years is seamless and provides much-needed context to the older man's tales. It's rare to see two actors come together on a character like this. Hat tip to the casting director, because this was top-notch.

Tone wise, there's a lightness to the film early on, a playfulness, that comes in handy when the plot takes a brief yet dark detour in the second hour of the film. Anthony McCarten, who wrote "The Darkest Hour" and "The Theory of Everything," never lets the tension subside for too long though, keeping a healthy mix of wit and humor at his disposal.

Visually, the film is a stunner. You'll marvel at the locations shown in the film and want to book a flight, signing a resignation from your own life. "The Two Popes" bounces around from Buenos Aires to Rome, over to Spain and Uruguay, and back to Rome. The cinematography deftly conveys the sequence, keeping the focus on the men and the room while sitting in awe of the surroundings.

I loved this film and its deliberate portrayal of two men who couldn't be more different yet found a middle ground to help move the Church forward. I am not a very religious person, and I found this film to be fascinating and unexpectedly heartfelt. There's a lot of talking, walking, eating, and drinking-but there's a purpose. Meirelles holds back nothing, thus giving us everything.

"The Two Popes" isn't just a history lesson about the power of diplomacy within a church; it's a thought-provoking display of mercy, acceptance, and friendship.

Make some time and see it.