Review | 'Queen and Slim' is a masterpiece, a thrilling ride only fit for the bold

What if you took the signature love soaked romance of "Romeo and Juliet" and mixed it with the fugitive ambivalence of "Bonnie and Clyde" and timely morals of "Do The Right Thing?"

You'd get Melina Matsoukas' "Queen and Slim," a blazing new thriller that is politically-charged and highly entertaining.

This is simply a very well crafted film featuring two outstanding breakthrough debuts: the director, Matsoukas and her star, Jodie Turner-Smith. Throw in the fiery scribe work of Lena Waithe and the excellence of Daniel Kaluuya, and you have an engrossing blend of sophisticated thrills.

Turner-Smith and Kaluuya are a pair of young souls on a seemingly simple first date. While they are rookies when it comes to sharing meals together, Queen and Slim are approaching a pro-level of bickering. The night continues in Slim's car as the two ride home, but when they are pulled over by a racist cop, things escalate and end in murder. Suddenly, the would-be lovers are fugitives on the run from the law.

Queen and Slim, which are names never used in the film but are given in the press notes, rely on family and good fortune as the cops go hunting for them in a chase that starts in Georgia, carries over into New Orleans and continues into Florida.

But as the manhunt builds, the neighborhood unrest gets out of hand as people call the two runaways heroes and their actions defined by poetic justice and self-defense. 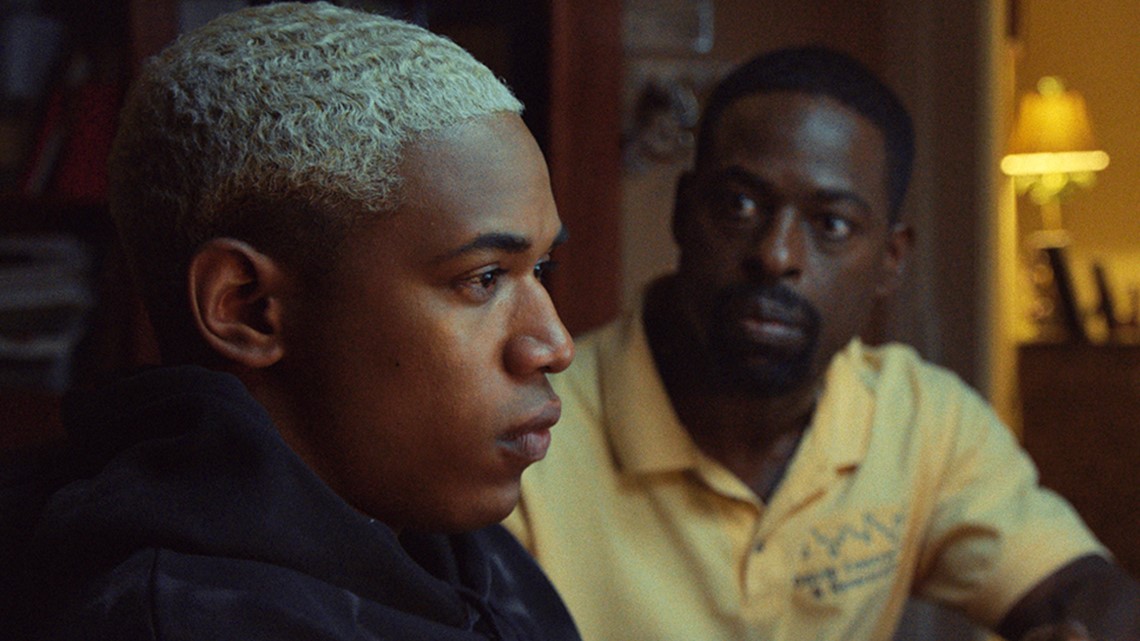 Review | 'Waves' may not be an easy watch, but it's a good film that marches to its own beat
Expectations can be a deadly weight to carry over the end of your innocence. For Tyler (Kelvin Harrison Jr.), a wrestler thriving in high school, it revolves around meeting the goals not carved by his own mind, but those of his overbearing father, Ronald (Sterling K. Brown).

If you haven't guessed by now, Matsoukas and Waithe -- going off a story idea from James Frey -- are infusing this film with real events that the headlines can't hide. Police officers racially profiling young African Americans in roadside stops and useless searches. In the film, Slim cooperates with the officer and does everything he says, but the demands and endless abuse never cease, resulting in action. Before you call it fictional, read the news. Common doesn't begin to explain it.

But Matsoukas doesn't use the real events to merely manipulate your senses. This film doesn't preach down or try to twist your head around. It's a love story with real-life fabric sewn in for the sake of informing people of what is happening around the world. The law taking advantage of their power and place over the innocent, namely people of color.

But don't let the make of the car distract you from the model underneath. This is a love story and a beautifully told tale. The two-hour-plus running time moves quick and shows two people in the worst of times coming together and falling in love. This isn't an easy mix to pull off, but Waithe lends the script some weight and easy flow, giving it kinetic energy and helping the random movie fan fall headfirst.

The action is sudden and abrupt, shot with incredible grace and power by the director of photography, Tad Ratcliffe. Pete Beaudreau's editing is crisp and the soundtrack is among the best collections of the year.

Turner-Smith, in her first role, is a revelation. Right off the jump, in that diner scene, she gives Queen a full-scale personality that helps later scenes fall into place easier. This is an actor taking the words off the page and making them her own, from Queen's reluctance to fall for Slim and using her attorney mind to figure out problems. This is the breakout performance of the year.

Kaluuya should now be mentioned among the names of Lucas Hedges, Timothee Chalamet, and Michael B. Jordan as new power players right now. Kaluuya proves he is a big-time talent with versatility. Many know him from Jordan Peele's "Get Out," but he was more impressive in a much smaller role in Steve McQueen's "Widows" last year. Here, he gives Slim layers that the audience doesn't exactly notice right away.

Bokeem Woodbine, always a convincing presence who you feel like you know, produces his best work in years as Queen's uncle who helps the couple on the run, while Chloe Sevigny and Flea produce fine supporting turns as helping souls they meet along the way. I particularly enjoyed Gralen Bryant Banks as a mechanic who doesn't fall for the national narrative. The entire cast fits into their roles like a sleepy body would into a couch that affords movement.

"Queen and Slim" is compelling -- a thrilling ride only fit for the bold who can handle the message as well as enjoy the entertainment that Matsoukas and Waithe's film provides. I admired the way they fleshed out every angle of this political movement, not just from the lens of their two leads, but from all areas and ages during their journey.

Without spelling everything out for you, this film holds you on the edge of your seat until the end, even if you get a feeling of where it's going. Turner-Smith and Kaluuya keep you invested.

Let's put it this way. My awards ballot was 98% finished, but after seeing this film, I had to re-arrange a few things. The moving around included my top five films, which "Queen and Slim" bought some real estate in the fifth spot. That's the pleasure of late-year releases. They come on like heavyweight punchers throwing their best shots. This movie hits hard.

Don't forget about this one. Like "Parasite," it's a unique ride that defies one genre. It's a masterpiece.