Parson has urged people to get vaccinated while also declining to enact restrictions to slow the virus' spread, instead asking people to take personal responsibility 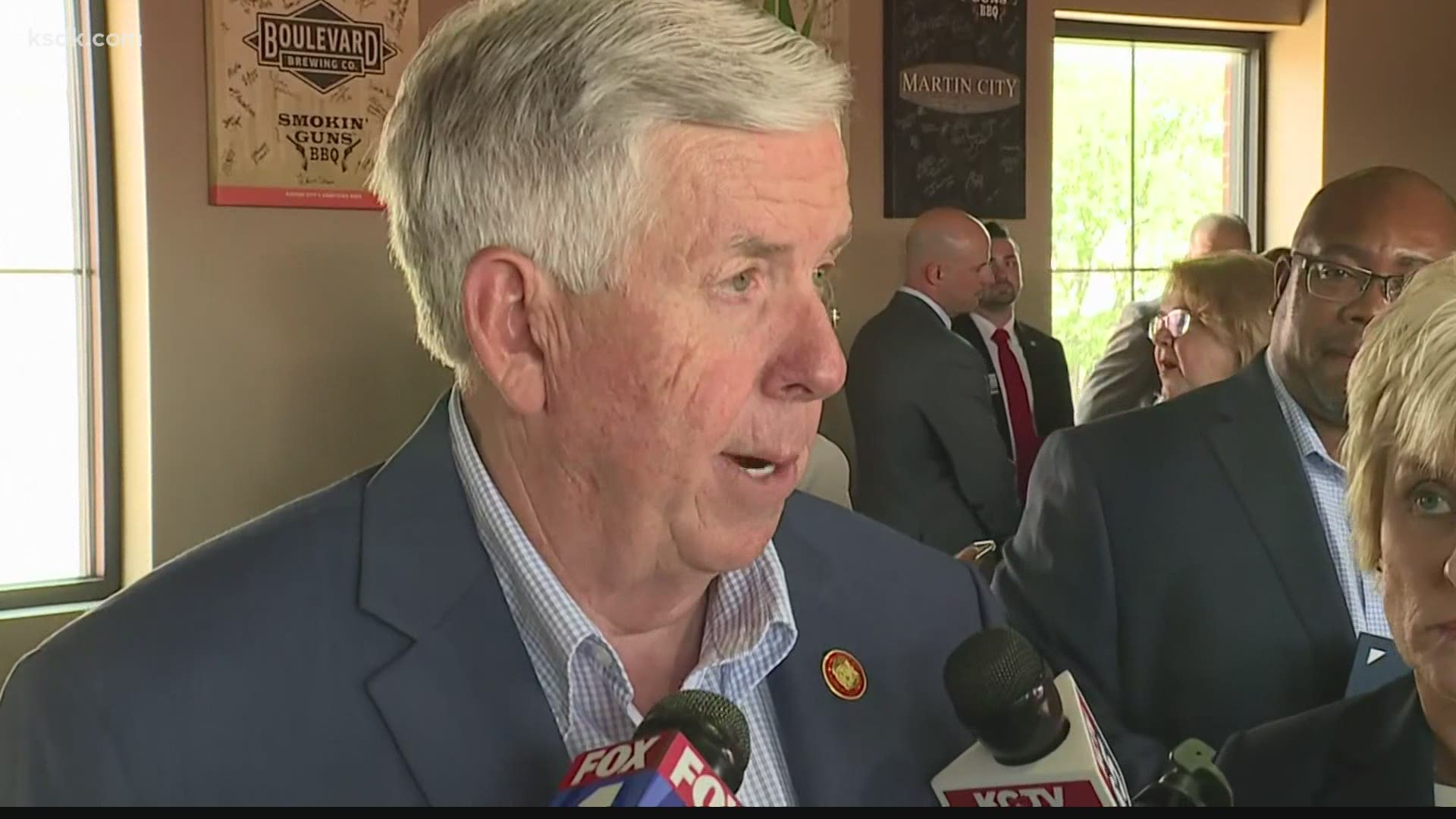 KANSAS CITY, Mo. — Federal officials are pushing back after Missouri Gov. Mike Parson said he doesn't want government employees going door-to-door in his state to urge people to get vaccinated, even as a COVID-19 outbreak overwhelms some hospitals.

Missouri asked for help last week from newly formed federal “surge response” teams as it combats an influx of cases that public health officials are blaming on fast-spreading delta variant and deep-seated concerns about the vaccine. After President Joe Biden mentioned the possibility of door-to-door promotion of the vaccine, Parson tweeted: “I have directed our health department to let the federal government know that sending government employees or agents door-to-door to compel vaccination would NOT be an effective OR a welcome strategy in Missouri!"

He added Thursday during a stop in the Kansas City area to promote a new law that provides a legal shield against COVID-19 liability lawsuits that hospitals are not overwhelmed on bed space. He said he didn't know what the federal government planned to do but stressed that the state had been getting federal help all along.

“We are all concerned about the spike in the delta virus but to try to mislead people like we are in crisis is totally misleading," Parson said. “We are not in a crisis mode in this state and we shouldn’t be right now."

“We know there’s a vast number of people that is hesitant to take the vaccine," Parson said. "That is what we all should be working together trying to find a solution to get more vaccine in more people’s arms, not trying to force people to take it. Not trying to scare them into it. Just make sure that they understand the facts."

“So I would say for those individuals, organizations that are feeding misinformation and trying to mischaracterize this type of trusted messenger work, I believe you are doing a disservice to the country and to the doctors, the faith leaders, the community leaders and others who are working to get people vaccinated, to save lives and help to end this pandemic,” he said.

The pushback from Arizona and Missouri came after Biden said Tuesday: “Now, we need to go to community-by-community, neighborhood-by-neighborhood, and oftentimes, door-to-door — literally knocking on doors — to get help to the remaining people protected from the virus."

White House press secretary Jen Psaki noted Thursday that the door-to-door vaccine canvassing is done entirely by volunteers and that the White House believes it’s helped boost vaccine rates in a number of states, including Alabama, Florida and Georgia. She emphasized that the federal government doesn’t keep a database of who’s been vaccinated.

Parson has urged people to get vaccinated, while also declining to enact restrictions to control the virus' spread, instead asking residents to take personal responsibility. Missouri — which leads the nation with the most new COVID-19 cases per capita over the last two weeks — never had a mask mandate, and Parson signed a law last month placing limits on public health restrictions and barring governments from requiring proof of vaccination to use public facilities and transportation.

Over the weekend, the Republican governor tweeted a picture of himself at a fireworks celebration in the tourist town of Branson, a large crowd behind him. Branson is about 40 miles south of Springfield, where one hospital, Mercy Springfield, was so overwhelmed with patients that it temporarily ran out of ventilators and took to social media to beg for help from respiratory therapists. This week, Mercy Springfield set a pandemic high for hospitalizations.

Last night Teresa and I participated in the Branson Landing’s 14th annual Liberty Light Up in celebration of Independence Day.

We had a great time with some of our grandkids at the event and enjoyed watching the fireworks display. pic.twitter.com/1KRw2lSYZA

Just 29.5% of residents in the county where Branson is located have received at least one COVID-19 vaccine shot, state data shows. That is below the state rate of 45% and the national rate of 55.1% but not unlike several other southwest Missouri communities. Some have vaccination rates in the teens and 20s.

Vaccine and mask resistance runs deep in the area: Branson’s mayor was elected to office this spring after running on a platform that called for doing away with masks.

“I think what Missouri shows us, unfortunately, is that it’s the unimmunized who are ending up in the hospital,” said Dr. Chris Beyrer, an infectious disease epidemiologist at the Johns Hopkins Bloomberg School of Public Health. “And that makes it in some ways even more of a challenge for health care workers, because these are preventable hospitalizations and preventable deaths.”

“This is a mass casualty event, happening in slow-motion," he said. “EMS resources are depleted, and the hospital systems are overwhelmed. Our community is in crisis."

Associated Press writer Tom Murphy in Indianapolis and Alexandra Jaffe and Zeke Miller in Washington contributed to this report. 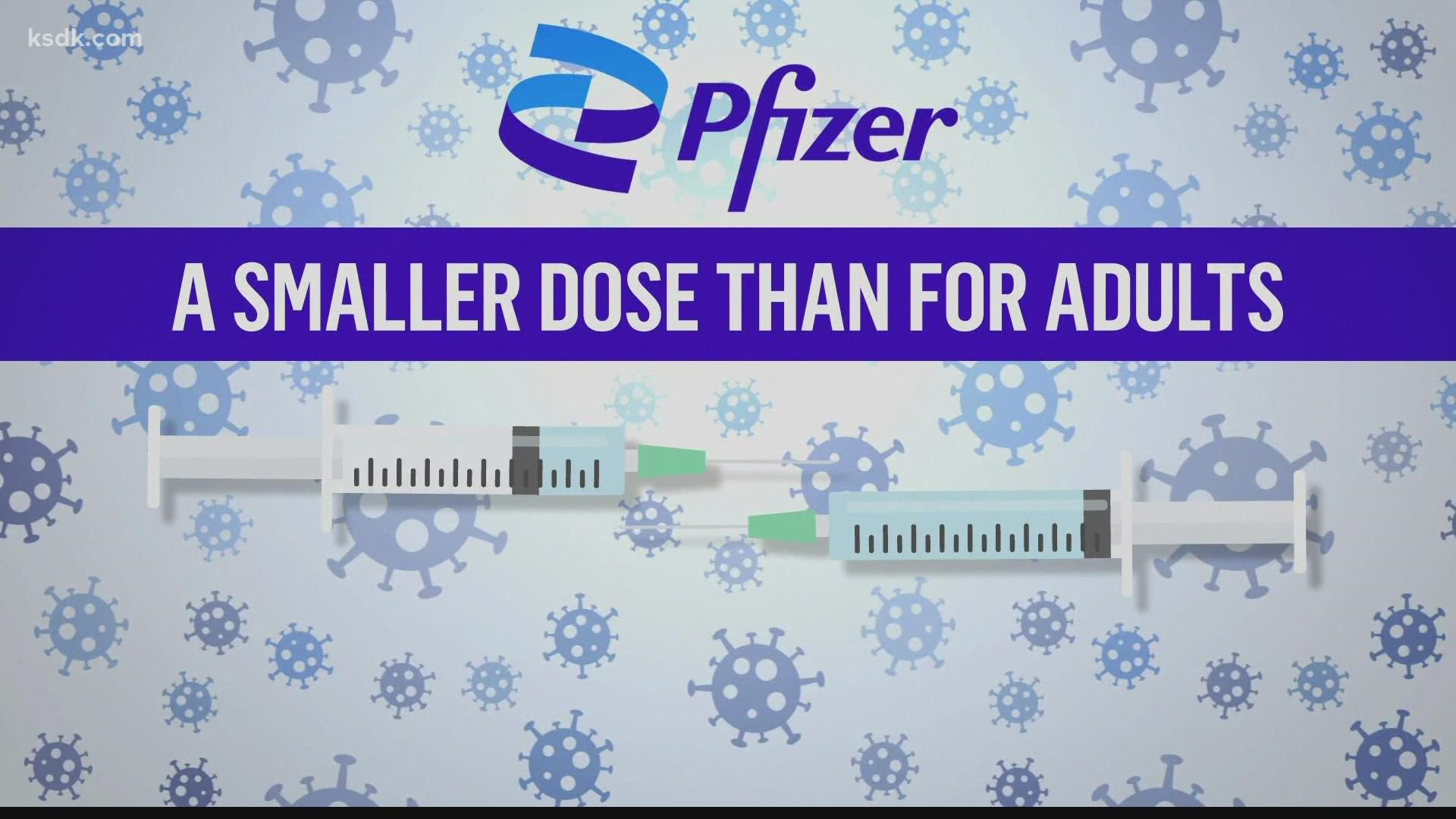 St. Louis pediatricians weigh in on potential of COVID shots for children 5 and up