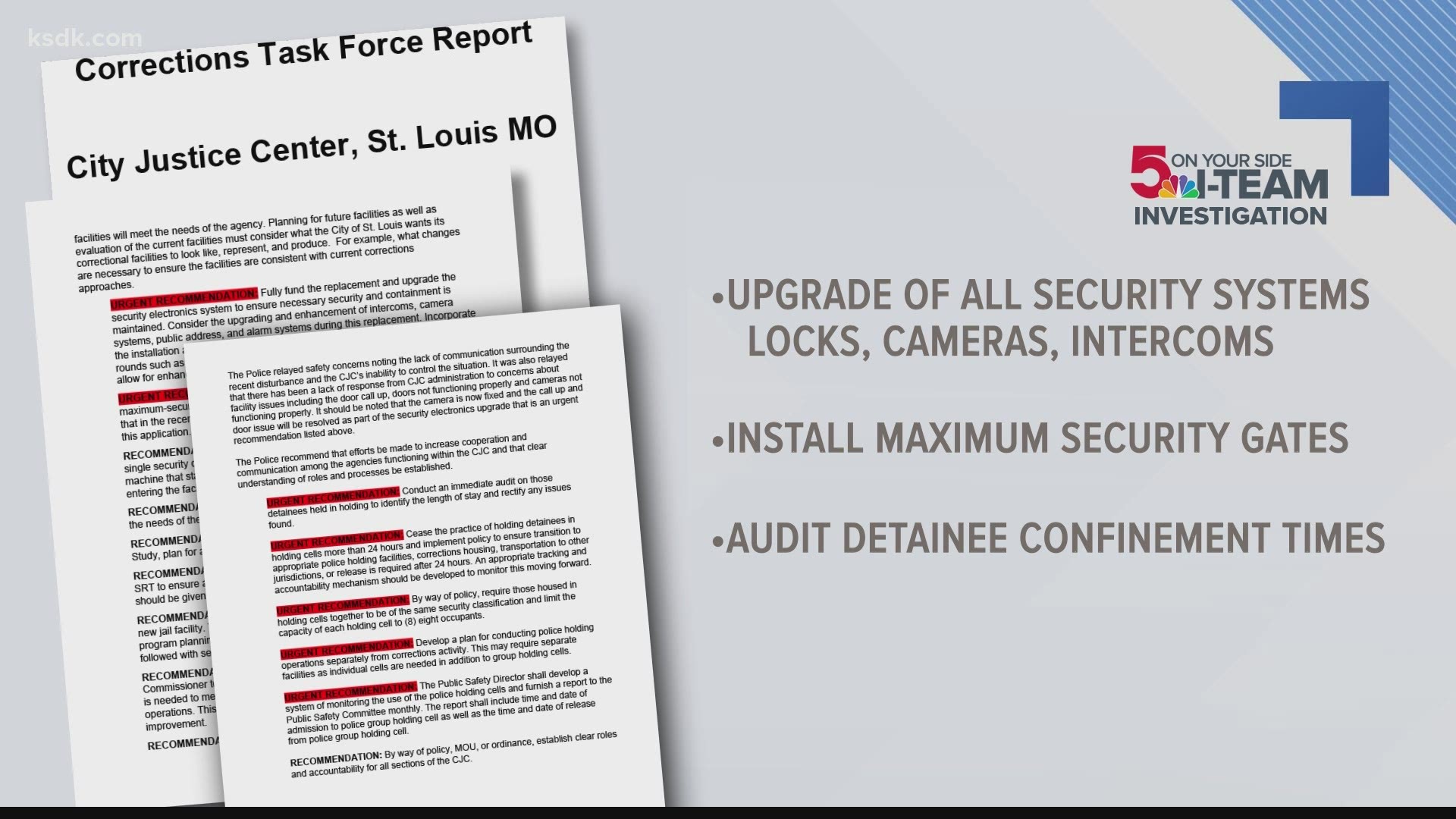 ST. LOUIS — Delays with cases from Circuit Attorney Kimberly Gardner's office, faulty locks, a short-staffed corrections division leading to increased confinement times are among the causes of a riot at St. Louis' downtown jail, according to a task force's final report.

The nine-person task force released its final report about the issues that led up to the February riot along with recommendations to prevent another incident from happening.

Among the 60-plus recommendations, the report highlighted in red the most urgent points, including:

In its report, the task force summarized interviews with a variety of people connected to the jail and the task force's three focus areas, which included building needs, delays in the courts and inmate complaints.

"Mr. Mahaffey shared the need for increased transparency and cited his experience with the City Attorney’s Office and their consistency in stonewalling records requests which results in barriers to defending clients," according to the report.

Mahaffey told the task force, "further barriers are being placed by the Circuit Attorney’s Office," as recommendations for charges are not being shared in "a timely manner," according to the report.

"Mr. Mahaffey outlined the problematic use of grand juries rather than preliminary trials and his feeling that the Circuit Attorney’s Office is filing by complaint but taking the cases to grand jury which is resulting in unnecessary delays."

Mahaffey also said, "Since the Circuit Attorney's Office chooses to file over 99% of their cases by complaint, pretrial accused individuals should not be spending an average of 146 days before a probable cause determination is made."

"Detainees confirmed that this is a primary source of their agitation and a major contributing factor to recent disturbances," according to the report.

Those "takeaways" include a reduction of dayroom/recreation time, which also limits phone, TV, dining, and shower time, as well as the loss of visitation and programming activities, according to the report.

The report also concluded the corrections division had a "critical" staffing shortage of 88.

"Active supervision requires that detention officers roam housing units regularly, and supervisors visit each housing unit frequently to support housing unit officers. It was observed that due to the crowding and staffing inadequacies, this is not happening at the CJC," according to the report.

Internal memos obtained by the 5 On Your Side I-Team allege severe staffing shortages contributed to a growing tension between St. Louis police commanders and Department of Corrections staff. The memos also alleged widespread drug use among detainees.

The Rev. Darryl Gray led the task force, and said he wants it to become a permanent oversight committee.

“We don’t see our work as being complete,” Gray said, adding that he wants a permanent oversight committee to look into the facility.

Mayor Lyda Krewson assembled the task force after the February riot and released a statement, which read, in part, “We will immediately begin to review the information and recommendations — some of which we believe are already in the process of being implemented.”

The task force believes those measures would go a long way to regain the public’s trust, Gray said.

He also noted how task force members weren’t allowed direct access to inmates, other than unit representatives. They also could not interview guards in a confidential setting.