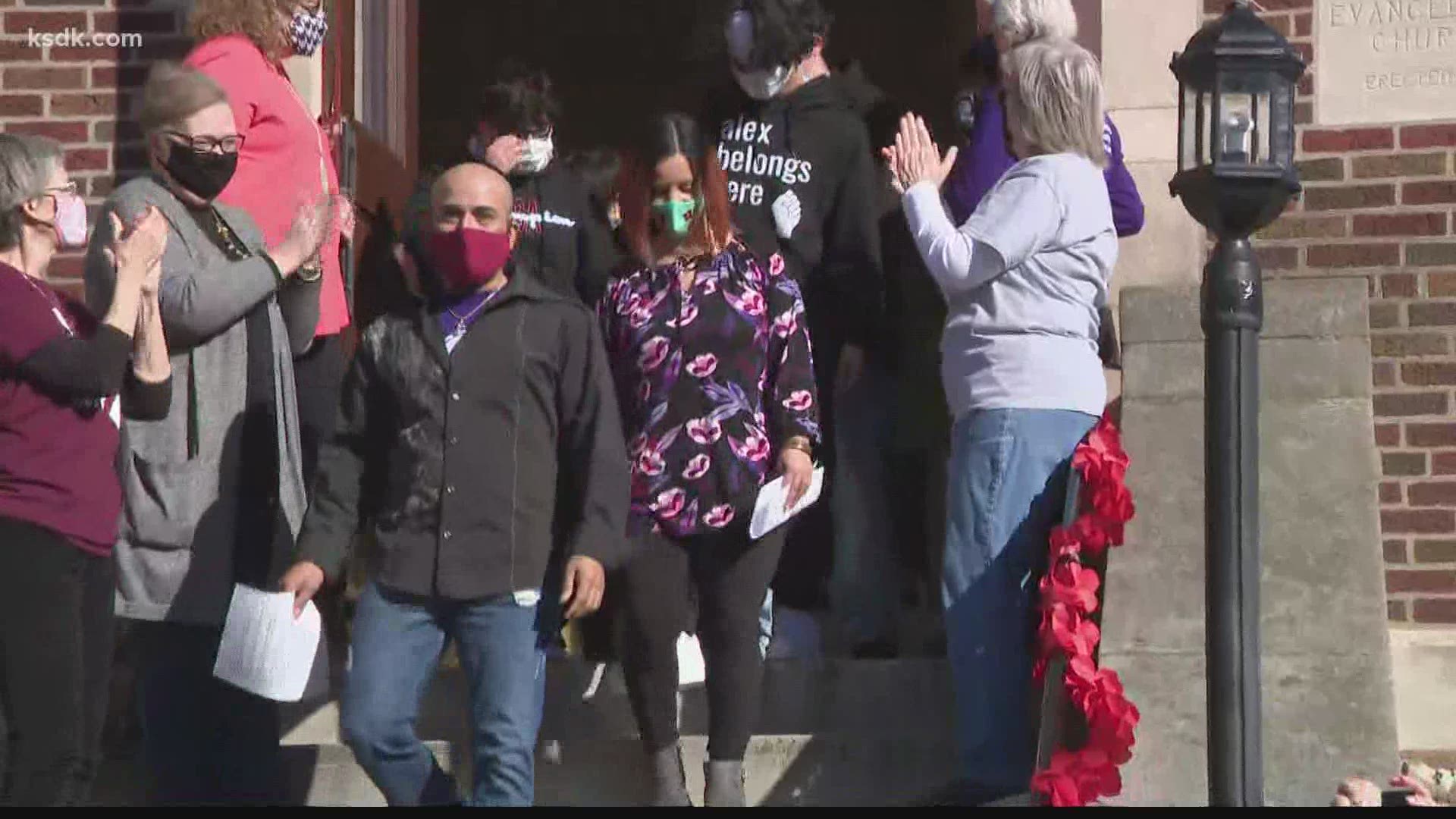 MAPLEWOOD, Mo. — Alex Garcia, the Honduran native who has been living in sanctuary in a Maplewood church for nearly four years, walked out of the church to live with his family Wednesday afternoon.

In a news release, Garcia’s immigration attorney, Nicole Cortés, and Sara John, executive director of the St. Louis Inter-Faith Committee on Latin America, said Immigration and Customs Enforcement (ICE) has declared that Alex Garcia is no longer a priority for deportation. The agency has unequivocally stated that it will not be pursuing Alex’s detention or removal.

“Today, we celebrate as I leave sanctuary and reunite with my family after being separated for 1,252 days," Garcia said Wednesday. "Because of all your support and the new presidential administration, Immigration and Customs Enforcement made a promise that I am no longer a priority for deportation.”

Garcia, a husband and father of five, has been in this country working in construction since 2000. But the Trump administration ended immigration discretion established by the Obama administration, and Alex and his wife, Carly, feared he would be deported. Cortés and John said at that time, ICE unilaterally revoked its previous decision to allow Alex to stay with his family.

Carly and their children moved from Poplar Bluff to Maplewood to be closer to Alex at the church. Still, they lived separately.

On Monday, U.S. Congresswoman Cori Bush (D-1st District) announced she would be sponsoring a private bill aimed at protecting Garcia from deportation.

Immigration attorneys said a private bill is an uncommon tool of democracy lawmakers have at their disposal, where they can enact law to affect one person or a small group of people. Often it’s used as a signal to Congress – calling attention to a certain area of public law.

“We celebrate this win today, but it's not over; Alex still needs permanent protection," Carly Garcia said. "The private bill HR 1209 that Congresswoman Cori Bush introduced on Monday will grant Alex the protection he desperately needs - that we as a family desperately need.”

“The pain Alex and his family have endured is unimaginable, unjust, and unacceptable," Rep. Bush said. "ICE has promised not to deport Alex, and we will stop at nothing to ensure that they keep their promise. In Congress, I will continue championing the private bill to grant Alex permanent residency, which is the surest way to guarantee permanent unity for his family.”

“We are thrilled that these changes to enforcement priorities have meant that many people in sanctuary like Alex feel safe enough to walk free," said Sara John, executive director of the St. Louis Inter-Faith Committee on Latin America. "We also know that Alex and millions of families like his are still fighting for permanent solutions and the ability to live united with their families. We will continue to work alongside them to secure humane legislative reforms that honor the dignity of all people, prioritize family unity, and end the criminalization of all immigrants and communities of color.”

The pastor at the church where Garcia has been living said their prayers were answered.

“The hearts of all of us at Christ Church are overflowing today. God has answered our prayers for Alex Garcia to live freely, without the threat of being separated from his family. Alex is a part of our church family and we will continue to advocate for him until he has a pathway to full citizenship." said Rev. Rebecca Turner of Christ Church United Church of Christ in Maplewood.

An ICE spokesperson said local ICE and Enforcement and Removal Operations (ERO) officers have discussions with case attorneys, to include the attorney for Garcia, to explain the interim priorities. However, ICE does not confirm whether the agency will pursue enforcement action on a particular individual.

“We continue to make determinations on a case by case basis in accordance with law and policy,” said ICE Public Affairs Officer Shawn Neudauer. “The guidance provided for ICE focuses on the agency’s stated interim priorities, and does not prohibit the arrest, detention, or removal of any noncitizen.”

ICE officials say Rene Alexander Maldonado Garcia, a citizen of Honduras, was removed from the United States to Honduras in July 2000. This was based on a June 9, 2000 final order of removal issued by a federal immigration judge. He illegally re-entered the U.S. at an unknown location and time. They also say Garcia has a 2009 conviction for DUI in Missouri. He was arrested by U.S. Immigration and Customs Enforcement (ICE) officers in 2015 and placed on an order of supervision, with a periodic check-in requirement. His prior order of removal was reinstated in 2017 after he failed to comply with check-in requirements. His appeal was denied by the Board of Immigration Appeals in April 2020.