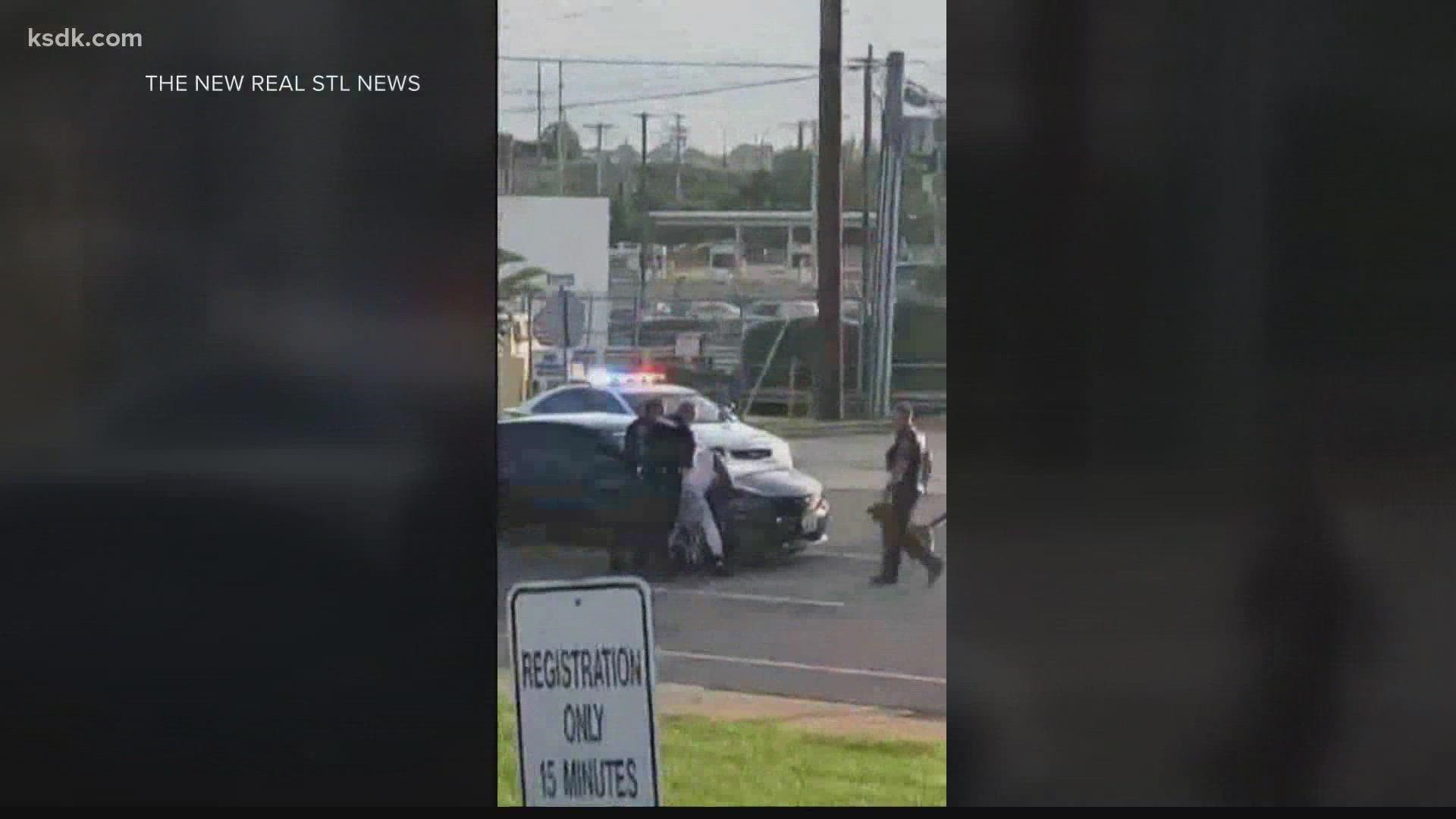 WOODSON TERRACE, Mo. — Woodson Terrace police have released a statement after a video of their police canine officer allowing his dog to bite a man multiple times during an arrest attempt was widely shared on the internet. The man was accused of trespassing.

"The fact of the matter is, it's a human reflex response, you can't have an 80-pound dog puncturing your skin and be compliant," said Gould, who expertise is based on more than 35 years of dog handling and management, deployment, and experience with police canines, service dogs, and private clients. "It's virtually impossible."

In the video recorded on the cellphone of some bystanders, the man can be seen with his hands on the hood of a police car as two officers restrain him there. The police canine officer then approaches with his dog barking and the man can be heard screaming as the officer holds the dog feet away from him.

The officers then move away from him as the canine officer releases the dog and allows it to bite the man's foot. The man keeps his hands in front of him as the dog bites him.

Note: This video may be upsetting to some viewers. Please turn on captions in YouTube video player.

The dog is allowed to bite the man for about 10 seconds before one of the officers tries to grab the man from behind. The dog then pulls the man by his foot away from the arresting officer and the man once again puts his hand on the hood of the police car and yells "Help" multiple times.

Two officers move in to arrest him again and get the man on the ground as the dog is still biting the man's foot. The canine officer struggles to get the dog to release the man's foot, which the dog does after having bitten the man for about 30 seconds.

The man then tries to get up and run as the dog is just feet away from him and still barking. The canine officer releases the dog and the dog bites the man in the back of his thigh. He falls to the ground and can be heard screaming. The arresting officers let the dog bite the man's thigh for about 10 seconds before moving in again to arrest him while he is on the ground.

The dog keeps its grip on the man's thigh for about 20 more seconds as two officers have the man restrained on the ground before its handler pulls him off the man. Witnesses recorded the encounter on cellphones and it was first reported by The New Real STL News Facebook page.

Woodson Terrace Police Chief Randy Halstead has not returned a call for comment from 5 On Your Side, but the department released a statement saying police were called to a business at 7:18 a.m. Monday for a trespasser refusing to leave.

The Woodson Terrace Police Department has 18 officers, according to its Facebook page. It serves a city of about 4,000 people in north St. Louis County.

"The caller was fearful the subject was going to remain in the building," according to the department's statement.

The man left the business when police arrived and officers found him walking toward another business.

The statement from police continues:

Our officers made contact with the subject and the subject immediately started threatening to kill the officers and identified as a sovereign citizen. The subject continued yelling obscenities and telling the officers he would not comply and he 'will not obey your contract'.

Officers told the man to stop walking, but he continued to walk away from them into rush hour traffic along Woodson Road. Police blocked traffic to prevent him from getting struck by a car and observed the subject was under the influence of narcotics and advised him he was under arrest.

Woodson Terrace police say the man refused medical treatment at the scene even though they called for an ambulance. Once at the department, the man started complaining about his injuries, so police called an ambulance to take the man to the hospital.

Police say they found what they believe to be methamphetamine in the man's possession, "which is why the officers were unable to restrain the subject," according to the statement.

They have released the man pending the application of warrants, according to the statement.

Gould said he did not know what the officers were experiencing at the time of the encounter, but the video was "disturbing to watch."

"The use of a police canine, it is an instrument that has to be deployed very carefully, and there are certain circumstances, when we talk about probable cause, what was the underlying crime and sometimes police incidents escalate, but sometimes they de escalate," he said. "In the video that I saw, it looked like the person being detained was under control.

"There could be underlying factors that I'm not aware of, but it was disturbing and I would look into it very carefully, why other levels of force would not have been utilized. Based on what I said and saw it looked like the subject was under control." 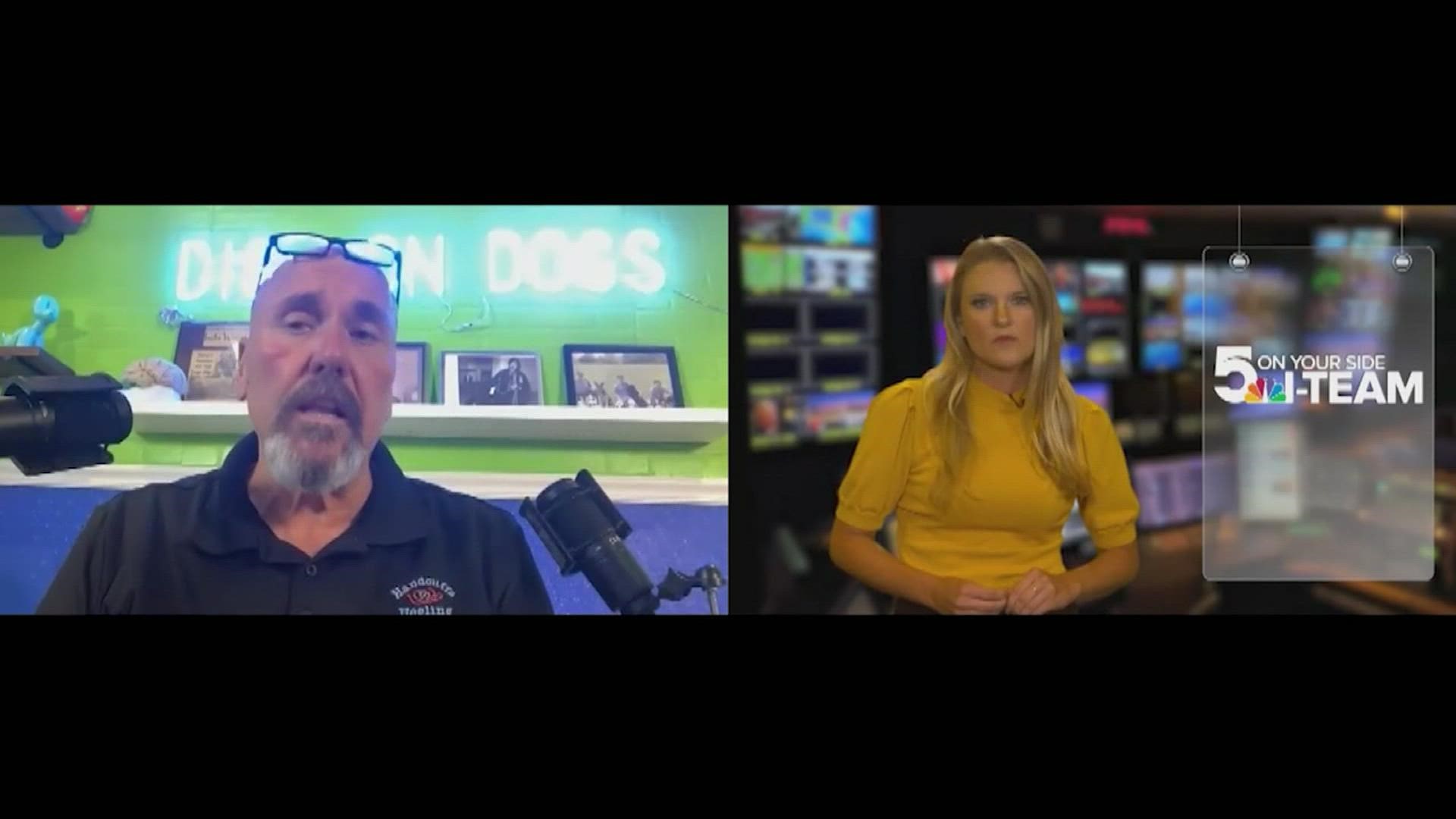 At least one police organization is calling for an outside investigation into the incident. The Ethical Society of Police, which represents mostly Black officers, issued a statement on Twitter with a link to 5 On Your Side's coverage of the confrontation.

This is more than problematic. The Woodson Terrace officers involved need to be investigated and by someone other than Woodson Terrace PD. @CivilRights @aclu_mo @ACLU @MoPublicSafety https://t.co/9UA54hMJ2Y