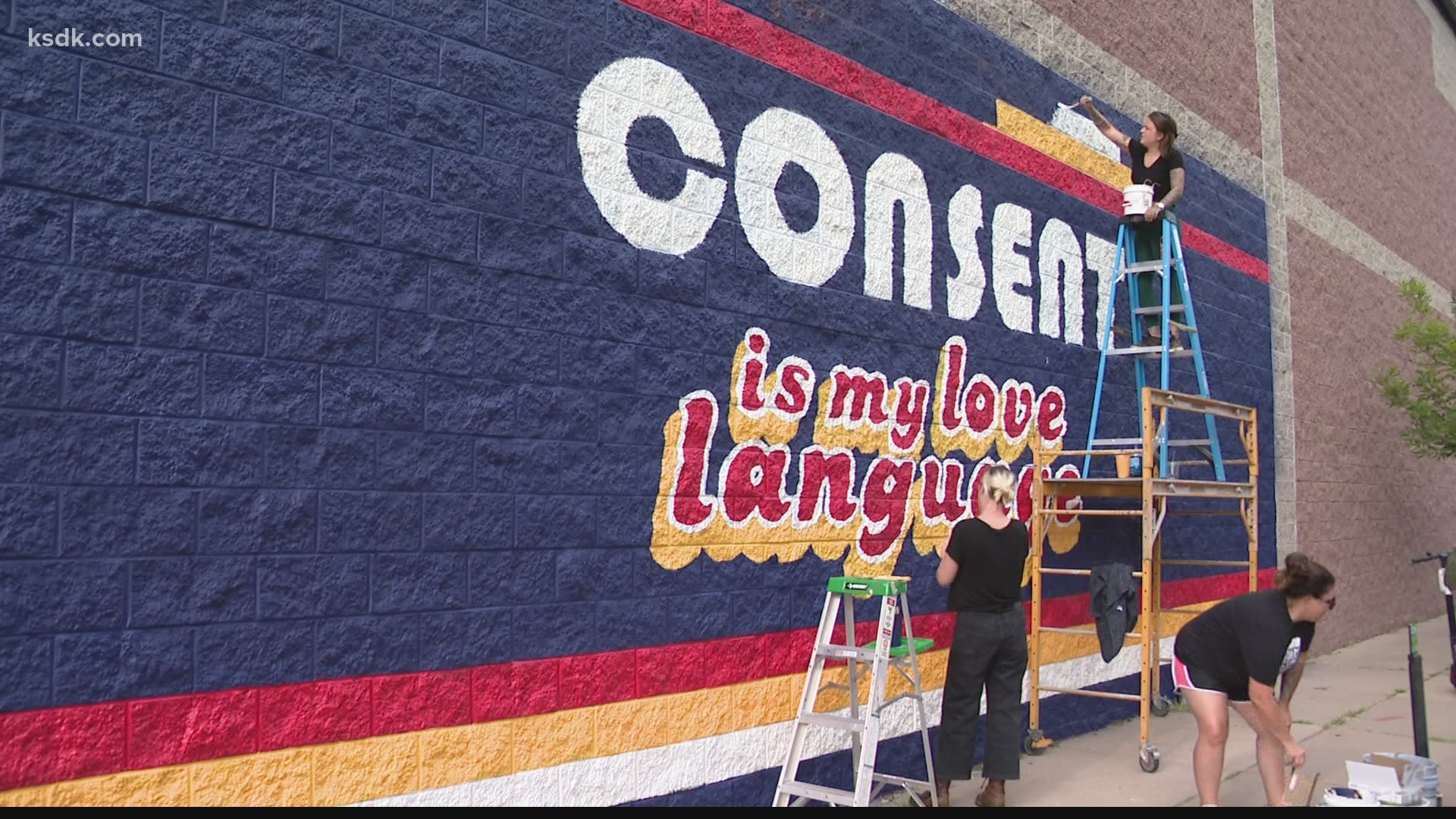 ST. LOUIS — A new message has popped up in a busy nightlife area in St. Louis.

A mural in The Grove is shining light on sexual assault accusations that surfaced this summer. Multiple women claimed they were drugged and abused.

Many fingers pointed to some workers in the Grove.

"Here in St. Louis, there are so many accounts of sexual assault, it was empowering to see a collective voice of survivors come together," Sarah Shelton said. "We wanted to make a statement that was not only on their front yard, but also that it was a prominent place."

That's when the idea of creating a mural came up.

The words "consent is my love language" were brushed on a wall along the busy Manchester Avenue.

Shelton is the founder of Girl Louie, a creative storytelling agency trying to provide a platform for women to learn, grow, and support each other.

She's also the illustrator behind the new art.

Shelton partnered with organizations and survivors to make their message loud and clear. Those organizations included Bartenders for Black Lives and STL Against Sexual Assault, a survivor-led organization dedicate to preventing sexual assault in the service industry through training.

"Consent is a form of love and it’s a way to give permission to someone," she said. "We’ve never made a mural before. We are just a group of women, some of us survivors, just wanting to make a lasting statement here in the community."

Survivor Bre'Anna Holcomb was there in the mix of painters. Standing side by side next to other survivors.

"It's so powerful to be standing next to somebody that understands the pain that you felt and to be able to put it out in front of everybody," she said.

The women have left their mark on this wall as well as on the community. The mural, they hope, will be a way for people to have conversations.

"There's going to be so much more willingness to discuss it and practice it, you know, or hold others accountable," Holcomb said.

It's a way to empower the community and other survivors, to remind them that they aren't alone and we're all stronger when we come together.

"The only way to start progressing as a community is to start having the uncomfortable conversations that for generations have been considered taboo," Holcomb said.

Shelton said other businesses have already reached out wanting murals in different neighborhoods to continue the conversation beyond The Grove.

The mural is also now a shirt. You can pre-order and all the money goes to STL Against Sexual Assault. They are working towards gaining non-profit status.

If you need resources or help, you can call Safe Connections 24-Hour Crisis Helpline at 314-531-2003 and they will guide you.