Police in Kirkwood and St. Charles County have applied for warrants against the coach on behalf of the alleged 16-year-old victim 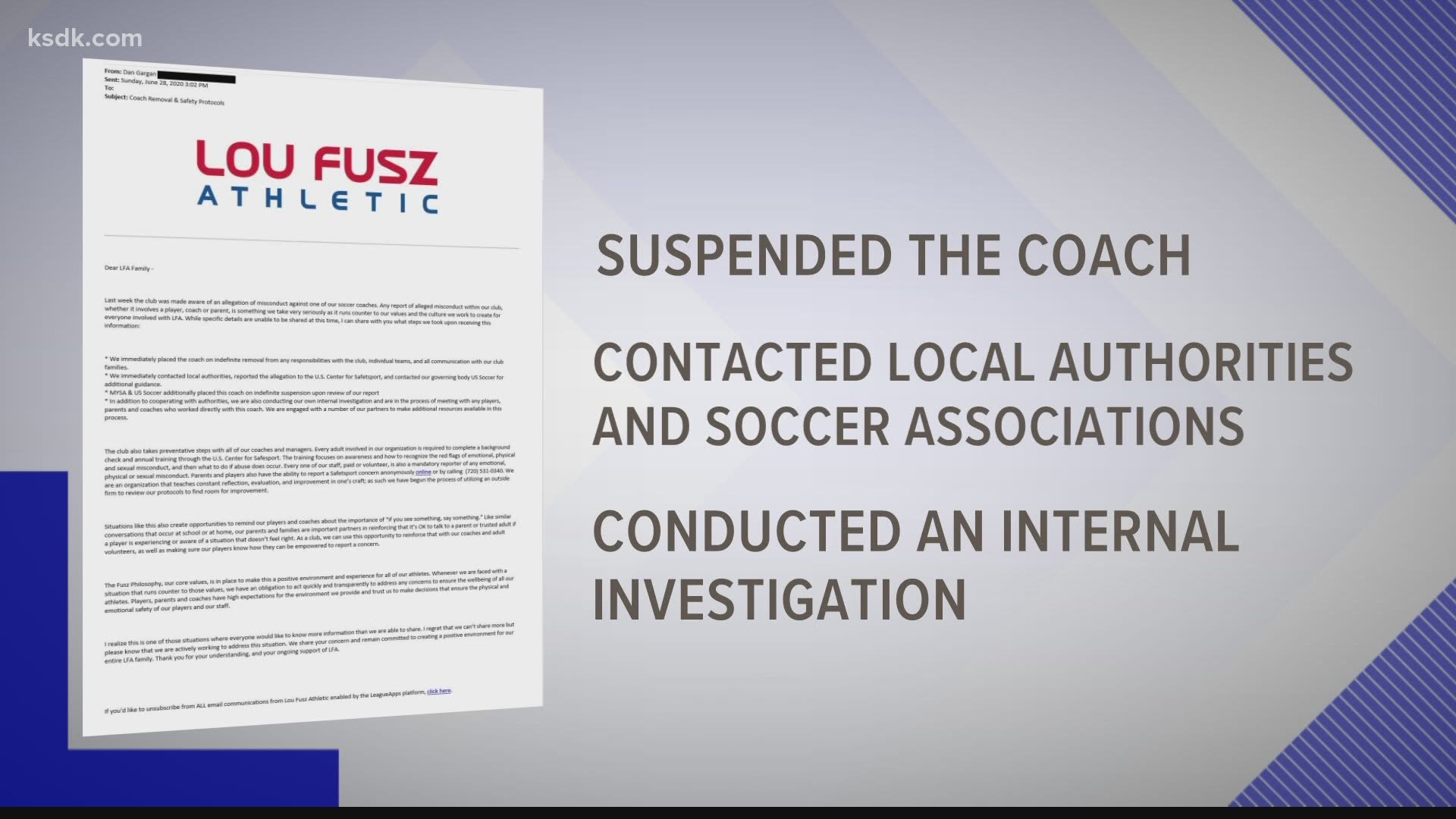 ST. LOUIS COUNTY, Mo. — A well-known youth select soccer club has hired an outside firm to recommend ways it can improve after suspending one of its coaches over accusations that he had sex with one of his 16-year-old players.

The U.S. Center for SafeSport suspended the coach’s license after Lou Fusz leaders alerted it to the sexual abuse allegations last month.

Police in Kirkwood and St. Charles County have applied for warrants with their respective prosecutors against the coach, who is almost twice his victim’s age.

Representatives from those prosecutors’ offices say no charges have been filed.

And the volunteer coach for the Lou Fusz Soccer Club was also on probation for misdemeanor resisting arrest and DWI at the time of the alleged abuse, according to documents.

The alleged victim’s attorney tells 5 On Your Side her family’s primary goal is to keep their daughter safe from any further abuse, and that they have questions about how he was ever allowed to coach youth soccer in the first place given his criminal history.

“They're all working on coping with what has happened and what has transpired and the revelations that have taken place,” said attorney Grant Boyd. “Luckily she has an unbelievable support system in place, not only at home with her family, but also her friends.

“So right now, the primary concern is her well-being and safety and ensuring that that support system stays in place.”

Multiple sources familiar with the investigations tell 5 On Your Side that the alleged abuse began in March and took place at the Kirkwood residence of one of the victim’s relatives, as well as at the coach’s home in St. Charles County.

Lou Fusz Soccer Club responded with a statement to 5 On Your Side, calling the coach a volunteer, but it did not say for how long.

5 On Your Side found social media posts from the coach showing that his work with the organization dates to at least 2016.

The statement also did not address how the coach’s previous run-ins with the law were weighed when he was allowed to join the club.

The statement confirmed that club leaders “received a report suggesting that a volunteer coach recently had an inappropriate relationship with a player on one of our teams” and that the coach had been suspended.

The statement continued: “For years, we have implemented many proactive measures to reduce the risk of misconduct, and we remain committed to constant reflection, evaluation and improvement. We will continue to work internally to focus on preserving the thousands of positive relationships we have with our teams, coaches, players and community.”

Court records show the coach confessed to refusing to take a breath test during a 2007 traffic stop.

On May 25, 2019, a St. Charles County police officer said the coach almost struck her patrol car while he was driving westbound near O’Fallon Road, according to court documents obtained by 5 On Your Side.

The officer wrote that the coach made three circles along the same roads, across to the area of Clydesdale Drive and back onto O'Fallon Road from Saddlebrook Drive while driving at speeds of between 60 to 85 mph or more, almost striking parked vehicles in the subdivision, cutting off moving traffic and driving recklessly in the center divided lane, turning off his vehicle lights while trying to lose the officer, ultimately wrecking his vehicle on O'Fallon Road near Francis Howell Middle School.

He then got out of his car and began to fight the officer, according to the court documents.

“I fought (the coach) on the ground, where he tried to grab my duty belt, hide/tuck his arms under his chest, and reached into his pockets, all while I told him to stop resisting and that he was under arrest,” the officer wrote. “(The coach) alligator rolled under me while I attempted to take him into custody, turning onto his back, grabbing my duty belt and attempting to grab/trap my arms.

“It was only when I struck (the coach) in the face twice that I was able to gain control to handcuff and subdue him; even after being handcuffed he continued to try to fight and escape.”

The officer applied for failure to yield to an emergency vehicle, resisting arrest by flight, careless and imprudent driving with an accident and fourth-degree assault on a law enforcement officer.

The alleged coach pleaded to misdemeanor resisting arrest and DWI in February and was sentenced to two years of probation, according to court records.

Given those guilty pleas, the alleged victim’s family wants to know how he was ever allowed to coach their daughter’s team, according to their attorney.

U.S. Center for SafeSport requires background checks for all coaches every two years.

It’s unclear when the organization last checked the coach’s background.

In a memo dated June 28 obtained by 5 On Your Side, Lou Fusz Athletic General Manager Dan Gargan wrote to parents that the organization found out about the allegations “about a week ago” and that the coach was suspended.

The memo did not name the coach.

The organization’s leaders also confirmed that they:

“The club also takes preventative steps with all of our coaches and managers,” Gargan wrote. “Every adult involved in our organization is required to complete a background check and annual training through the U.S. Center for SafeSport. The training focuses on awareness and how to recognize the red flags of emotional, physical and sexual misconduct, and then what to do if abuse does occur. Every one of our staff, paid or volunteer, is also a mandatory reporter of any emotional, physical or sexual misconduct.”

The memo also reminded parents that they also can report concerns anonymously to SafeSport online or by calling (720) 531-0340.

“We are an organization that teaches constant reflection, evaluation, and improvement in one’s craft; as such we have begun the process of utilizing an outside firm to review our protocols to find room for improvement.” 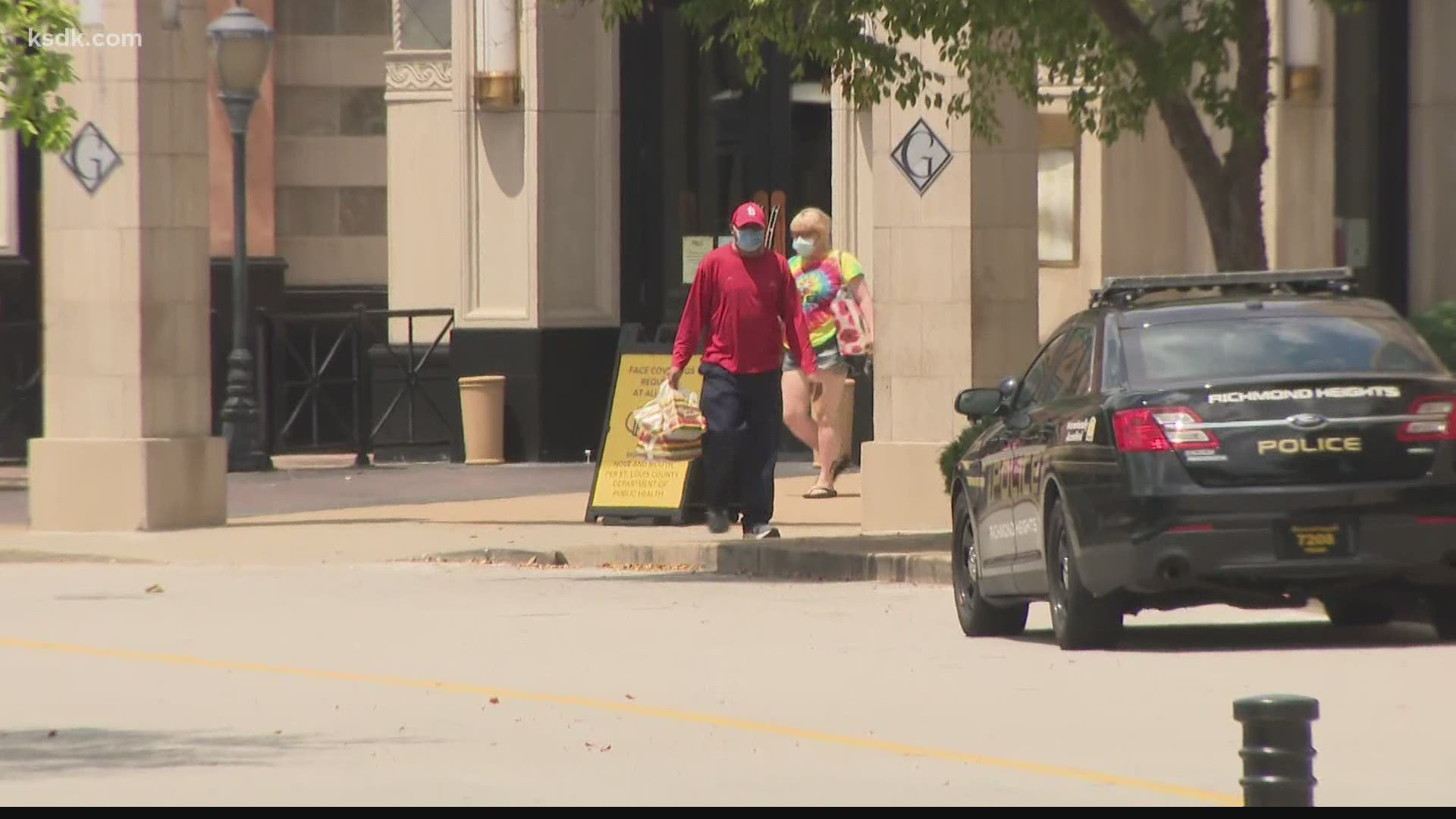 RELATED: 'It wasn’t new to us' | Task force leader says warning from Dr. Birx was not a surprise