Analysis: Ward-by-ward breakdown of how St. Louis voted for mayor

Cara Spencer narrowed the margin of victory by five points, winning over more voters in wards she won before, but it wasn't enough to beat Tishaura Jones 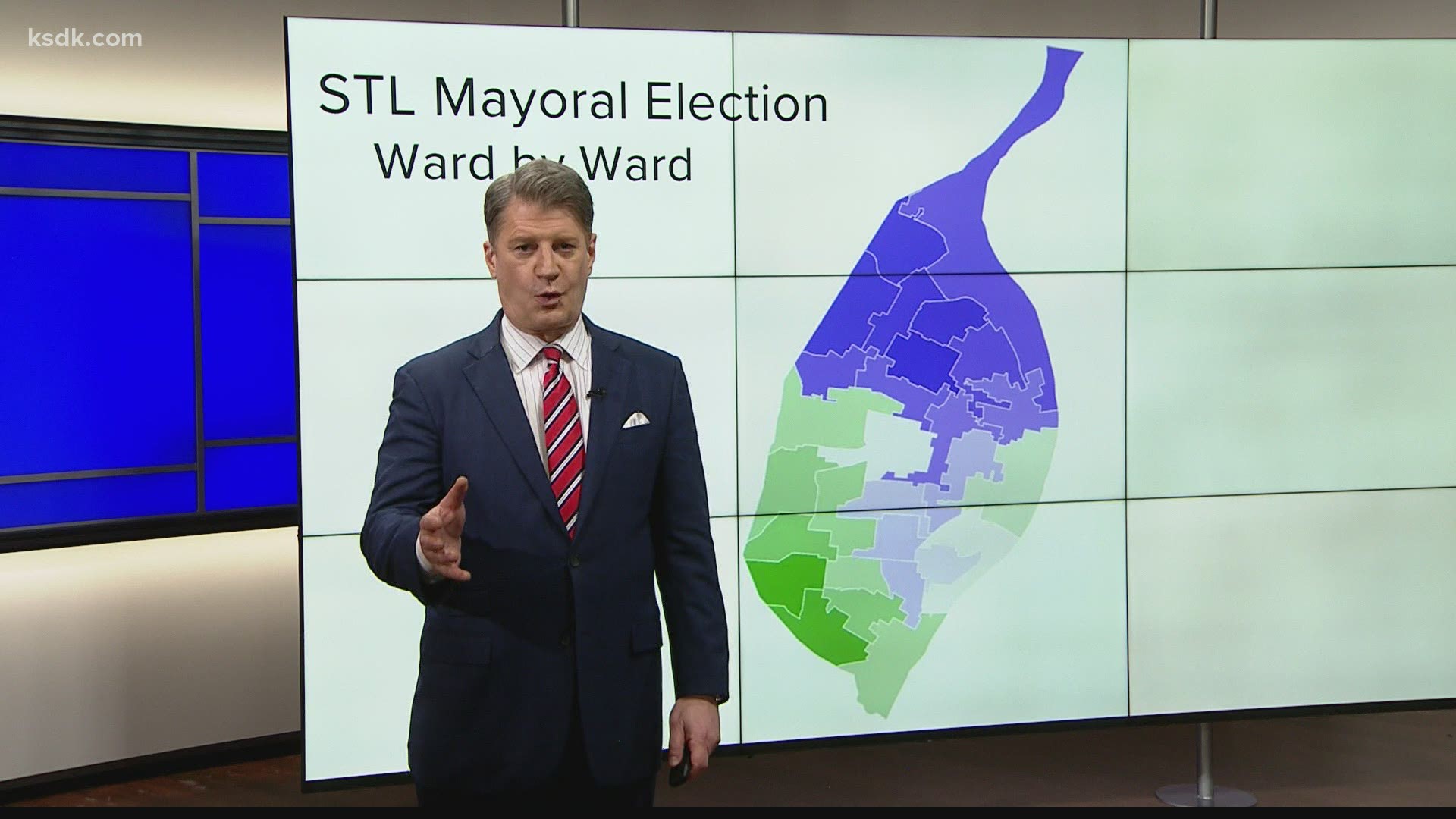 ST. LOUIS — Going into April 6, the race for mayor in the City of St. Louis was more heated than in any year before. That's because of the new nonpartisan approval voting system, giving voters two Democratic candidates to pick between. Primary results from March showed that Tishaura Jones and Cara Spencer had pockets of supporters, split between north and south.

Ward-by-ward results released by the St. Louis City Board of Election Commissioners show that both candidates kept their majorities in the wards where they performed best in the primary.

The biggest change came in the amount of support each candidate received within those wards. In some cases, a candidate gained or lost voters who put them on their ballots in the primary, leading to a narrower margin of victory for Jones.

In three wards, Cara Spencer increased her support by more than 20% of the vote. The data suggest that voters who didn't put Spencer on their ballot in the primary decided to choose her as mayor.

In Ward 12, which covers Boulevard Heights, Carondelet and Princeton Heights in south city, Spencer received 78% of the votes for mayor. That's an increase of more than 23 percentage points over her proportion of primary voters.

Wards 16 and 23 also saw big increases in the proportion of the vote going to Spencer, continuing the trend across the southern edge of the city up to Interstate 44.

Spencer only lost a proportion of the vote in two wards, 14 and 28, where she still received more than 60% of the vote.

The north-south political divide is visible in wards on each side of Delmar Boulevard. Jones retained her commanding lead in nine wards, with more than three-quarters of the vote.

Her most significant lead came in Ward 4, including JeffVanderLou, Kingsway East, Lewis Place, The Ville and the Greater Ville. Eighty-seven percent of voters there chose Jones, an increase of 14 percentage points over the proportion of voters who chose Jones in the primary.

The strongest support for Jones came from wards where president of the Board of Aldermen Lewis Reed won the second most votes in the primary.

Explore 5 On Your Side's interactive ward-by-ward analysis in the map below.

Turnout for the 2021 general election came in at 29% of registered voters, slightly lower than the 2017 general election when current mayor Lyda Krewson ran against candidates from other parties.

However, 2021 general election turnout was still higher than turnout in the primary, showing an increase of more than six percentage points.

The strongest turnout in both the primary and the general election this year happened in Ward 16, including Lindenwood Park, Princeton Heights, Southampton and St. Louis Hills in south city. That ward went to Cara Spencer.

Turnout was lowest in Ward 22, which covers Hamilton Heights, the Mark Twain/I-70 Industrial region, Wells Goodfellow and West End. Jones won 84% of the vote, but only 18% of voters came to the polls and cast a ballot for mayor.