5 On Your Side Countdown: Ranking the best players in Cardinals franchise history

We all know "The Man" is number one, but who comes after him? What do you think of our list of greatest Cardinals of all-time? 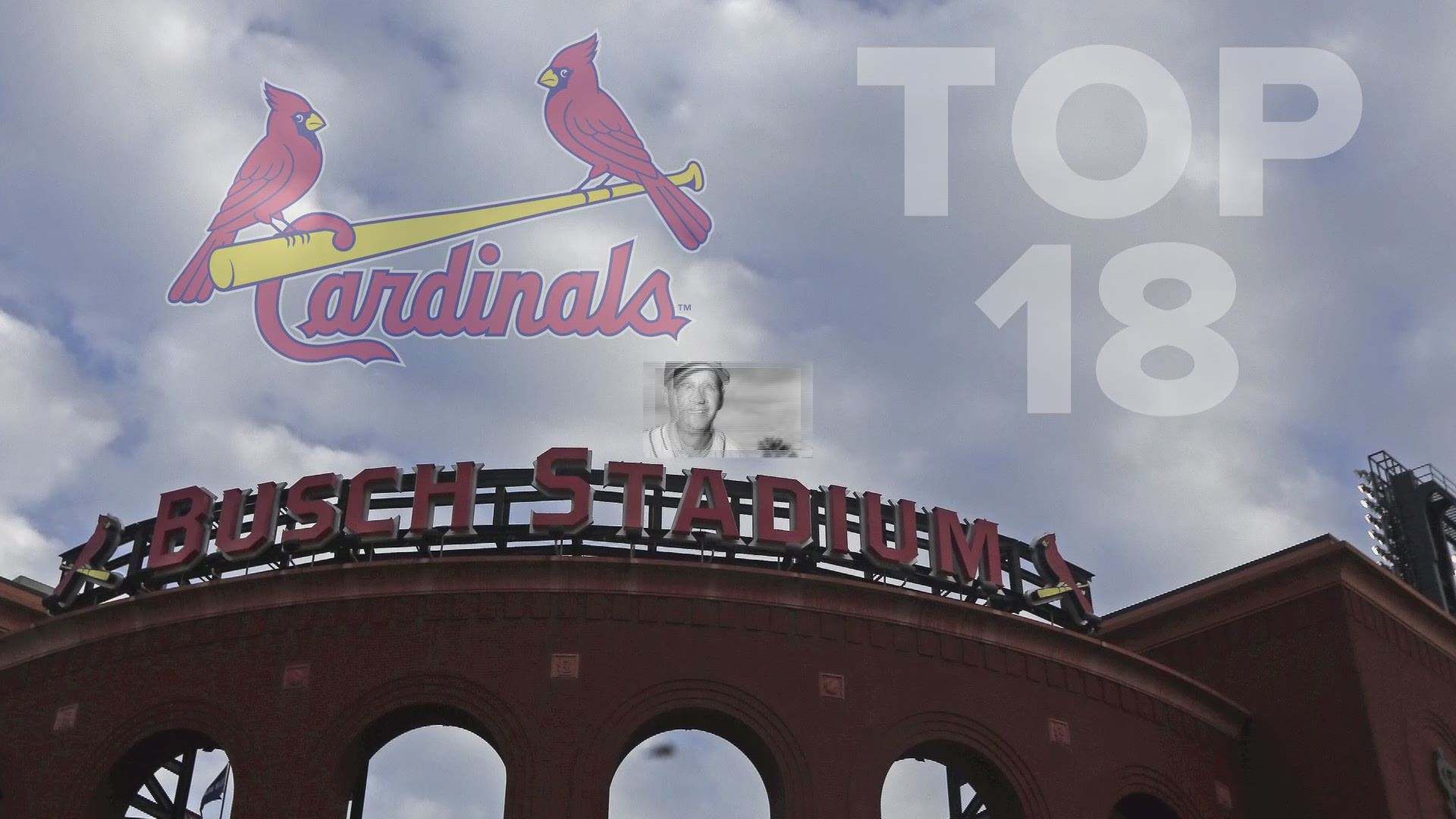 The past three weeks, we tackled the Blues all-time top 10, the 15 best basketball players to come from St. Louis and last week, the best professional football players to ever play in our town.

This week, we take on maybe the most daunting ranking of them all. We're counting down the top 18 players in the history of the St. Louis Cardinals.

From the gas house gang, to "Whiteyball" to the teams of today, every era is represented.

Watch: Our countdown of the greatest Cardinals of all-time

He's most famous for his "mad dash" to help the Cardinals win the 1946 World Series, but Enos "Country" slaughter is much more than that.

He's a hall of famer, an the only famous "Enos" we still care to discuss in St. Louis.

Credit: AP
Enos (Country) Slaughter hits the dirt across home plate Oct.15, 1946 in St. Louis to score the winning 4-3 run giving the St. Louis Cardinals the baseball championship of the world in the eight inning. Boston Red Sox catcher Roy Partee, right, kneels up the third base line to take the throw from shortstop. (AP Photo)

As a rookie, Adam Wainwright authored two of the most iconic pitches in Cardinals history.

We have a three way tie of centerfielders at 16.

Nobody defended or had a bigger impact off the field than Curt Flood.

Nobody was more popular than Willie McGee.

And nobody had the combination of power and elite defense like Jim Edmonds.

When you're known by just one name, it makes you a legend.

The hall of famer made 10 all-star games and was a part of five World Series championships as a player, coach and manager.

Credit: ASSOCIATED PRESS
Meet Red Schoendienst, above, St. Louis Cardinalҳ second baseman who looks out from the dugout at Wrigley Field in Chicago before a game with the Chicago Cubs on July 3, 1953. Red is about the handiest man at the plate in the National League. Before the game Schoendienst led the league in batting with .346, scored 60 runs to lead in that division, was out in front with 104 hits, and was tied with teammate Stan Musial. (AP Photo)

He was only a Cardinal for four years, but he made the most of them.

St. Louis doesn't win the World Series in 1982 without Sutter and his 36 saves that season.

His split finger is still one of the nastiest pitches in baseball history.

The "Fordham Flash" was a lifetime career .316 hitter.

He won titles in St. Louis as a player and manager, and eventually ended up in Cooperstown.

Credit: AP
Frankie Frisch, pilot and second baseman of the St. Louis Cardinals, gives the situation on the field a careful once-over before taking his turn at bat, Oct. 2, 1934. Frisch, a World Series veteran, makes his eighth appearance in the classic, when he leads his National League champions against the Detroit Tigers, Oct. 3. (AP Photo)

The newest National Baseball Hall of Famer is one of the three best offensive catchers in baseball history.

"Simba" will take his rightful place among the legends this summer.

Credit: AP
Philadelphia Phillies Pete Rose bites his tongue as he Slides safely into home for a score during the first inning against the St. Louis Cardinals on Monday, Sept. 17, 1979, at St. Louis. St. Louis Cardinals catcher Ted Simmons reaches to put the late tag on Rose. Rose scored on a sacrifice fly to right field by Bake McBride Rose tagged up at third and beat the throw. (AP Photo)

In the conversation with Johnny Bench and Ivan Rodriguez for title of the best defensive catcher of all-time.

The future hall of famer just doesn't seem to age.

"Sunny Jim" Bottomley was a lifetime .310 hitter who was an MVP and eventually a hall of famer.

The second greatest pitcher in Cardinals history, and probably the most entertaining character to ever wear the birds on the bat.

Dean is the last National League pitcher to win 30 games in a season, and led the league in wins four times in his hall of fame career.

Credit: ASSOCIATED PRESS
The great Dizzy Dean gives a group of rookies at a Hot Springs, Arkansas baseball school, February 18, 1935, an object lesson in the pitching motion which has been described by sports writers as the smoothest ever known. (AP Photo)

From the infamous trade to his reign as the all-time stolen base king, Lou Brock's status as a legend is cemented.

He's part of the 3000 hits club and is one of the best World Series performers of all-time with a nearly .400 average in 21 games.

Credit: ASSOCIATED PRESS
St. Louis Cardinals Lou Brock (20) slides safely into second base as the ball gets away from New York Mets shortstop Frank Taveras during the fifth inning of their game in New York Sunday afternoon, September 23, 1979. This was Brock's 938th career stolen base, giving him the all time stolen base record. After stealing the base, Brock got up and eventually scored on the play. (AP Photo/Ron Frehm)

"The Big Cat" is the only player in history to hit 50 home runs in a season and strike out less than 50 times.

Credit: AP
Johnny Mize of the St. Louis Cardinals is pictured at bat, 1936. Catcher and ump are unidentified. (AP Photo/JP)

"Ducky" is still the last triple crown winner in the National League.

He's a hall of famer with 10 all-star games and an MVP award.

Credit: ASSOCIATED PRESS
Shown in photo is Joe “Ducky-Wucky” Medwick, St. Louis Cardinals slugging outfielder, won the award of the most valuable player of the National League, Nov. 9, 1937 in New York, it was announced by the Baseball Writers Association who made the award. Medwick polled 70 votes nosing out Gabby Hartnett, Cub’s catcher and SPA who has 68. Medwick became the third cardinal to be honored in 1931 manager Frankie Frisch was picked, Dizzy Dean walked off with the award. The National League in hitting with an average. (AP Photo)

He also had 2,400 hits and a lot of winning in St. Louis. Number one is an all-time legend.

The fiercest competitor in the history of St. Louis sports.

In his iconic 1968 season with the microscopic 1.12 ERA, Gibson had 13 shutouts. Adam Wainwright has 10 for his entire career.

Credit: ASSOCIATED PRESS
** FILE ** In this Oct. 2, 1968 file photo, St. Louis Cardinals ace pitcher Bob Gibson fires the ball at Detroit Tigers Norm Cash in the ninth inning of the first game of the 1968 World Series at Busch stadium in St. Louis, Mo. Jokingly, Bob Gibson says he's still considering legal action against major league baseball for lowering the mound after his historic, ridiculously low 1.12 ERA in 1968. The mound had a 15-inch elevation in 1968, and in 1969 it was only 10 inches, a huge change akin to expanding the nets in hockey or raising the hoop in basketball. (AP Photo, File)

Not the most likeable guy, but Hornsby could hit.

He hit .424 one year, the highest average ever recorded.

Hornsby and Ted Williams are the only two players in history to win two triple crowns.

If he never would have left, He'd have a Stan-sized statue waiting for him outside Busch Stadium.

He won three MVP's and finished second four times. The most dominant 11-year stretch in Cardinals history will propel Pujols to a first ballot induction to Cooperstown.

One of the greatest players in the history of baseball, and our town's greatest sports icon of all-time.

RELATED: From the majors to the minors on and off the field, here's how the baseball shutdown is affecting the Cardinals system