The St. Louis second that changed the history of football

Without the help of our town, football might look a bit different. Here's the story of how St. Louis gave birth to the forward pass. 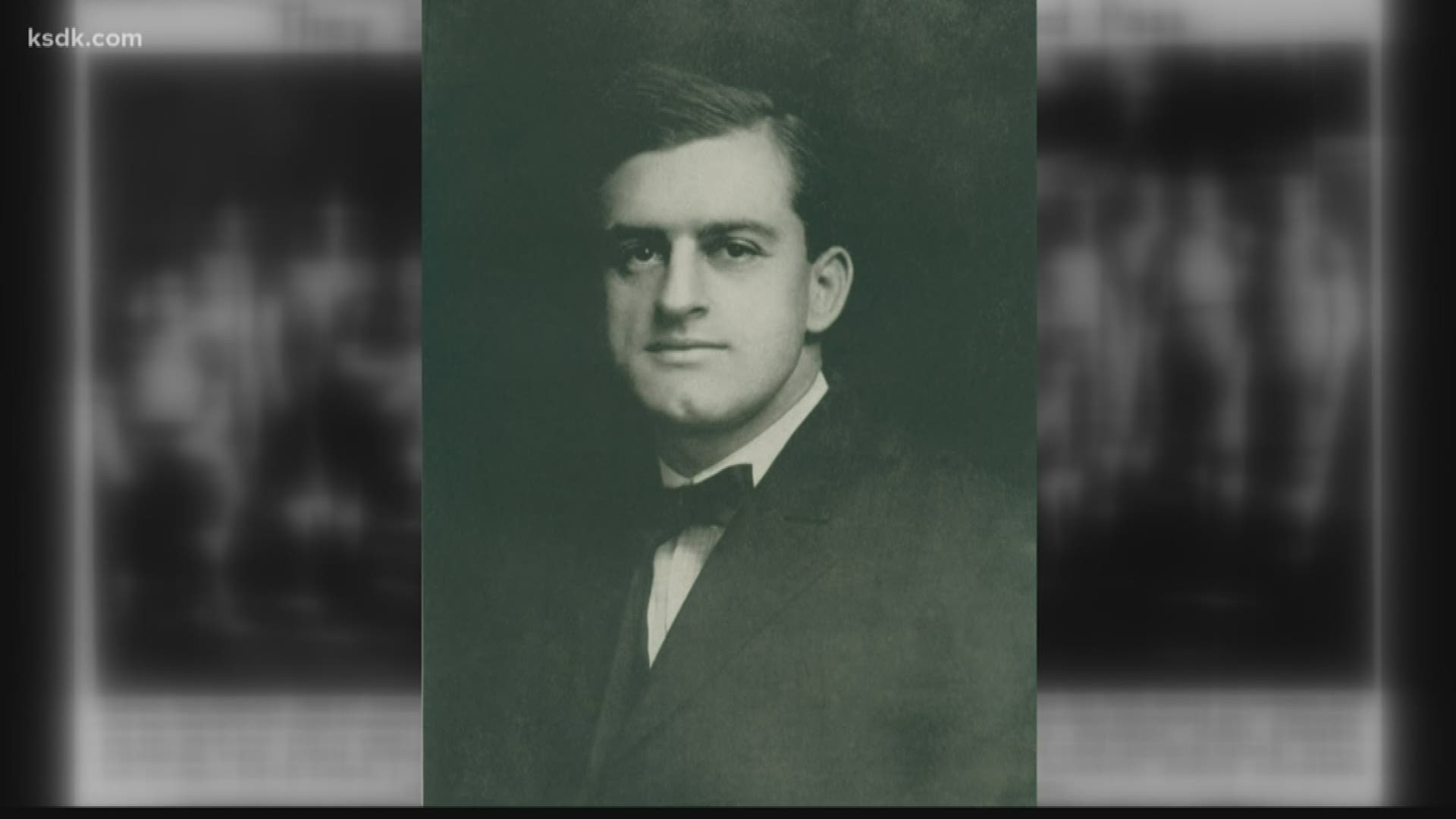 ST. LOUIS — Imagine if you will, in a city where there is no NFL team, and at a school that hasn’t played NCAA football since 1949, something so essential to today’s game was established by the Saint Louis University Billikens.

That was when SLU is credited with throwing the first legal forward pass in American football. The school at Grand and Laclede proved to be the innovator of the turning point in the game we know today. We’re creating a new series at 5 On Your Side called “The Turning Point,” and with it we’ll delve into great moments and events from St. Louis sports history – from local connections to events that brought national - and even world - attention to our area.

At the turn of the twentieth century, there was no NFL and college football had been around for nearly a half-century. John Waide, SLU's archivist emeritus, says his research shows the university had played the sport as far back as 1886.

The game at that time was at best, physically challenging. At worst, it was brutal and sometimes even fatal.

What would a spectator expect to see by going to a football game in those days? “One fellow would be carrying the ball and eleven guys from the other team would pile on top of him,” Waide recounted. Football historian Larry Kindbom, the head coach at Washington University, said it was a way for players to prove their manhood. “Like a college man, kinda prove yourself, masculinity kind of thing."

Broken bones and head wounds weren’t uncommon. Padding wasn’t nearly what it is now and the use of a helmet was almost unheard of. The sport’s violence even caused the ultimate outcome; that year nineteen football players died during games across the country.

President Theodore Roosevelt, known for his virility and his time spent out west as a cowboy, saw that the game had gone too far. Himself the father of a college athlete, T.R. organized a committee to look into how the game was played, and more specifically how to curtail the violence. The committee was comprised of the expected powers of the East – Harvard and Princeton among them – and one of the innovations they came upon was the use of passing the ball from one man to another.

Among the advocates of the pass was coach John Heisman – yes, that Heisman. The term that was originally used was the “forward projectile pass,” and it came with restrictions: The passer had to be at least five yards behind the line of scrimmage, and if a pass was thrown and not caught it was treated like a turnover, and the other team took possession of the ball.

RELATED: Opinion | Why Corey Dickerson would be a valuable addition for the Cardinals

Was that to limit the impact of the new rule, or to reduce the number of times the pass would be used?

In any case, 1906 would be the first year the new rule would take effect, and at the same time SLU had brought in a new coach: Eddie Cochems.

The 30-year-old was a former player who once scored four touchdowns in a game against Notre Dame. He had gone into coaching after graduation and became a pupil of Heisman while coaching at Clemson. He, like his mentor, was fascinated by the potential of the pass and how it could influence offensive football. Soon, the SLU campus became a petri dish for unleashing the power of the new strategy.

On the SLU roster was a medical student named Bradbury Robinson; six-feet-four with large hands – perfect for grasping the rugby-style ball that was used in the sport's early days; one description of the ball was “a blimp." Robinson, like Cochems, had roots in Wisconsin, and that’s where he learned the unorthodox method of grabbing the zeppelin-like ball near its end and throwing it in a way that the ball would spiral through the air. To his surprise, Robinson could propel the ball forty yards.  When Cochems took his team to a Jesuit-owned retreat in Lake Beulah, Wisconsin in the summer of 1906, they began working on ways to implement their new air attack.

The team remained in Wisconsin to being their season, and opened up against Carroll College (now Carroll University) in Waukesha.  After an ineffective first half of offense, Cochems decided that now was the time. The first time they got the ball after halftime, Robinson took the ball and waited, and then threw incomplete.  A startled Carroll team took over possession but did nothing with the turnover. Then Robinson tried again. He waited for teammate Jack Schneider to run a 20-yard out pattern and fired the ball towards him. Schneider made the catch and with no defender around him, ran into the end zone for the first-ever touchdown pass.

To say the new tactic went over is an understatement for that 1906 SLU squad: They outscored opponents 407-to-11 (that's four hundred and seven to eleven in case you thought the first mention was a misprint) in going a perfect 11-and-0. By comparison, the 1905 ground-based Billikens lost to Iowa, 31-0; the following year the Blue and Whites used the pass to maximum effectiveness in a 39-0 win at Sportsman’s Park.  Crowds to see this new phenomenon were spilling over SLU's on-campus field and so games were moved to the larger capacity home of the baseball Browns and Cardinals.

Other schools used the new rule and passed the ball in 1906, with several Eastern schools claiming they used it first – coastal bias that was usually attributed to new things beginning in larger cities like New York, Boston and Philadelphia and eventually making their way west.

Popular legend, though, claimed that the first pass was executed by grand old Notre Dame in 1913, with Gus Dorais getting the specific credit by throwing to end Knute Rockne – yes, that Knute Rockne. However, the iconic Rockne later wrote in his autobiography that Saint Louis U. and Eddie Cochems actually birthed the pass several years before.

Kindbom sees the forward pass growing simply out of a coach’s need to keep one step ahead of the other guy. “It was just enough that people looked at that (the pass) and said 'I wonder how we can use that to help us," Kindbom said.

Ironically, before coming to Wash U. Kindbom spent his days as a graduate assistant at Ohio State, coached by the legendary Woody Hayes. Hayes’ offense was known simply as “three yards and a cloud of dust.” He had a iconic disdain for the passing game, feeling it was nothing more than a diversion before beginning another series of running plays. “Three things can happen when you pass,” Woody famously said, “and two of them are bad."

Yet, without the passing game in football, the position of quarterback never becomes the most important position of any team sport. Without the threat of the pass, the exploits of Sammy Baugh, John Unitas, Joe Namath, Dan Marino and Patrick Mahomes might never have come before a nation’s eyes. Without the pass adding diversity to offenses, the game doesn't explode in popularity and become America's favorite pasttime. And for those fans of the game, memories of Hail Mary passes and offenses like The Greatest Show on Turf never come to pass, to coin a phrase.

Eddie Cochems won 24 games in three years at Saint Louis U. and then left; the reason is unclear. He would go on to be a head coach for only one more season, in 1914 at the University of Maine.

Robinson would go on to serve his country admirably as an officer in World War I. He became a doctor and was one of the first outspoken critics of the pesticide DDT. He would pass away in 1949, the last year that SLU played intercollegiate football, and more than two decades before DDT was outlawed in the United States.

The next time you happen to be near Grand and Laclede, look over at what is now Marquette Towers on the SLU campus. Imagine 1906, and see an athletic field – Handlan’s Park – in your mind’s eye.  Along with the Negro League St. Louis Stars playing baseball there in the 1920’s, Handlan’s Park was where the SLU football team practiced and played some of their games. Then remember the greatest pass plays in history, Kurt Warner’s throw and Isaac Bruce’s catch to win Super Bowl XXXIV among them, and remember with a knowing nod and a smile that it all began right there.