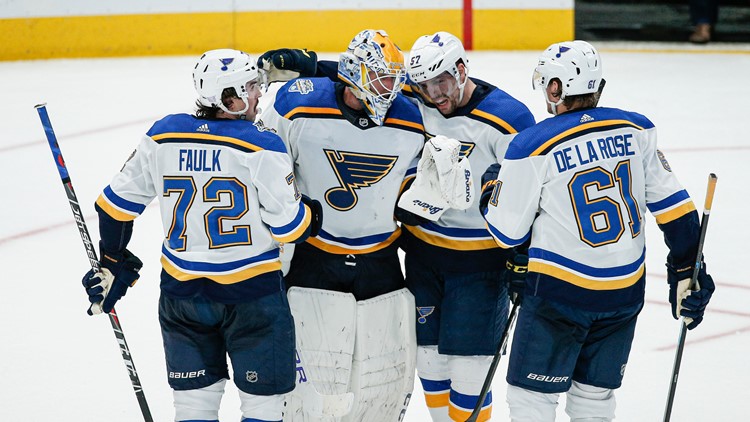 DALLAS — Ryan O’Reilly broke a tie 18 seconds after Dallas pulled even and the St. Louis Blues beat the Stars 3-1 on Friday night to extend their lead in the Central Division.

O’Reilly took a pass from Ivan Barbashev and beat goalie Ben Bishop from the slot with 2:53 left in the third period. Barbashev added an empty-netter with 3 seconds remaining.

Jake Allen made 31 saves, stopping everything except Roope Hintz’s shot 9 seconds after he came out of the penalty box with 3:11 to play. St. Louis has a nine-game road points streak (7-0-2).

Colton Parayko opened the scoring for Dallas with 4:19 left in the first period. He skated with the puck from behind the net and circled all the way to the top of the slot, just inside the blue line, and sent a wrist shot into the right side of the net.

The Blues outshot Dallas 11-5 in the first period. The Stars’ best scoring chance came six minutes in when Allen stopped Hintz’s deflection in front of the net of a shot by Tyler Seguin.

Dallas picked up the offense in the second period, with a flurry of 11 shots on goal in the first 6 minutes. The best scoring chance came 5 1/2 minutes into the period, when Allen stopped a wrist shot by Jamie Benn in the slot and another shot by Benn off that rebound.

NOTES: LW Nathan Walker and D Derrick Pouliot made their Blues debuts. Both had been called up from San Antonio of the AHL on Monday. Walker appeared to have scored his second NHL goal with 4 1/2 minutes left in the second period, but Dallas successfully challenged that the play was offside. ... Dallas C Justin Dowling returned to the lineup after missing two games because of nausea. As a result, C Mattias Janmark was a healthy scratch.

Stars: At Minnesota on Sunday.