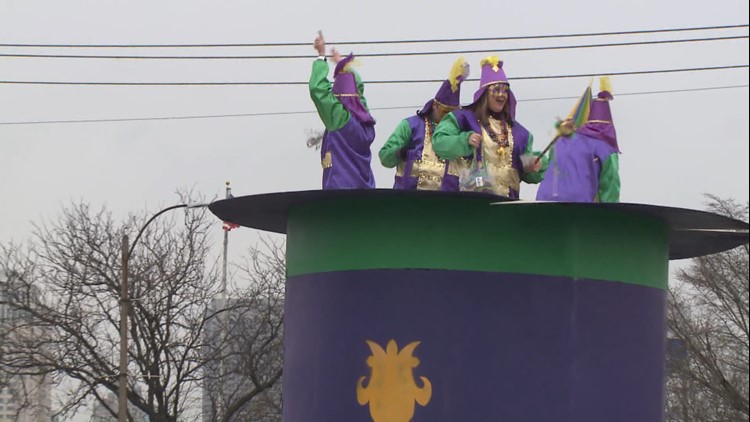 This story is a companion piece to the Abby Eats St. Louis podcast episode titled 'More than a Mardi Pardi.' Click here to listen to the episode or subscribe for free wherever you get your podcasts.

ST. LOUIS - It’s no surprise Soulard is the party capital of St. Louis for Mardi Gras.

But the name for the neighborhood south of downtown came long before the beads, beers and revelers partied in the streets. And it’s no coincidence the celebration in St. Louis is only outdone by Bourbon Street.

Back in 1764, Pierre Laclede and August Chouteau traveled up the Mississippi River from New Orleans to establish a trading post in St. Louis.

Thirty years later, a refugee from the French Revolution moved to some farmland south of the city where many other French people wound up settling down and building up.

“So, you see a lot of French architecture, the French Mansard roofs, the French balconies, and it’s all because of our direct connection,” Gullickson explained.

St. Louis legend has it that Mardi Gras in Soulard started in 1979 with a group of drunk pals who walked down the streets of Soulard tossing beads to make their own fun before Lent began.

Now, decades later, some 10 million strands of beads will fly into the crowd of partiers.

“I’ve seen its ups and downs. I’ve seen the rain. I’ve seen the snow. If the sun is shining, people will come out no matter what,” Gullickson said. He’s been part of Soulard’s Mardi Gras celebration for 35 of its 41 years.

About 400,000 people are expected to attend this year’s party.

From the Cajun cookoff to the Bacchanalian Ball. The Taste of Soulard and the Purina Pet Parade – which is the biggest pet parade on the planet, by the way. And the big shebang of them all: The Bud Light Grand Parade.

RELATED: Heading to Soulard this weekend for Mardi Gras? Here's everything you should know

Soulard has put itself on the Mardi Gras map.

“The idea of Mardi Gras is to celebrate, get it all out before Ash Wednesday and you have to give it up for 40 days. So, some people go a little extreme, but some people just enjoy it and just have fun,” Gullickson said.

And his message to anyone who says, “I used to go to Mardi Gras years ago, but now it’s just a giant, messy party”?