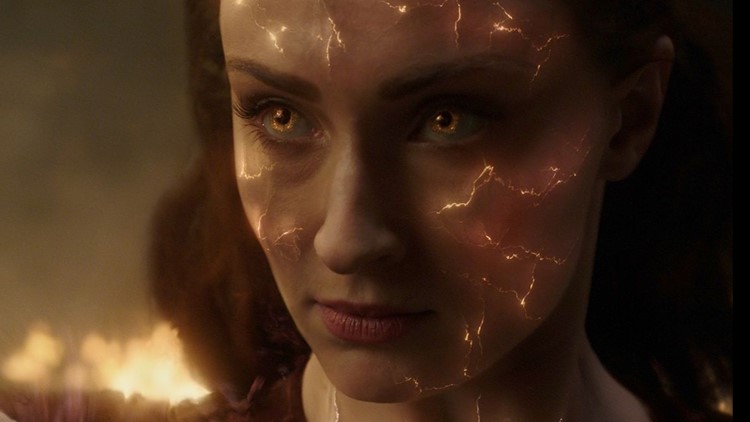 Review | 'Dark Phoenix' is a sufficient, yet far from great, finale to the X-Men franchise

ST. LOUIS — Power is an incredible thing, but it can also be a deadly one. Whoever wields it has the choice to do so for right or wrong. Consequences usually follow whichever choice is made.

This moral dilemma has been the backbone of the X-Men films since their debut 19 years ago with Bryan Singer's introduction to the world of mutants and humans battling for co-existence while they fight each other. There have been big hits (X2), powerful finales (Logan), surprisingly multi-faceted pleasures (Days of Future Past), uneven attempts (X-Men: Last Stand, The Wolverine), and downright awful endeavors (Wolverine: Origins, X-Men: Apocalypse).

Where does Simon Kinberg's Dark Phoenix fall in? Somewhere in the middle of it all, a fine if alternatively tiring finale with holes in its swing, yet enough of a follow-through on the action to make it a mildly satisfying experience.

Jean Grey (Sophie Turner), one of the more powerful X-Men with her cerebral abilities, becomes even more powerful when she is stuck inside a cosmic explosion in space. The accident unleashes a few demons in her mind, loose strings from a troubled childhood that was given a reboot by Charles Xavier (James McAvoy) and his special school for enhanced beings.

Grey's newfound power sets her on a dangerous path of destruction, and all mutants, both good or sorta bad, have to try to stop her. There's Raven (Jennifer Lawrence), Xavier's oldest rescue who knows Charles a little too well. There's his right hand man, Hank aka Beast (Nicholas Hoult).

Kinberg's overall story may not succeed as well as some of its isolated parts. There's a riveting sequence outside Grey's childhood home that is highly efficient. Later on in the film, a train sequence is quite thrilling, especially with Erik/Magneto(Michael Fassbender) doing a few neat tricks with some bad(der) foes. The moment in the film where Grey seeks out Erik is also well-constructed, heightening the tension.

Dark Phoenix is at its best when it mixes the tension, drama, and action together in a cohesively manner, creating scenes that remind you of the greatness of past films in the franchise.

Sadly, there's a moderate amount of the film that feels like a rehash of earlier worn out tropes. The quarrel inside a mutant to use his powers for right or wrong. The past catching up with Charles, creating dire straits for everyone around him. Erik having to walk that tightrope of monster and ordinary anti-hero.

When Dark Phoenix tries to focus on story, it becomes weak, like an electronic bolt zapping a superhero of its or her powers. When the action takes center stage, and Kinberg sprinkles a few fresh touches on Magneto's powers or Grey's madness, the film climbs a bit.

The result is better than 2016's X-Men Apocalypse (granted, the cast playing poker for 2 hours would have been better than that), but just a fine film overall. Fine as in creating something that resembles an end to these mutants lives, but not providing fans with much they haven't seen before.

The jury is still out on whether or not Turner is a true talent. While she shows some vulnerable pop in her portrayal of a hostile Grey, Turner doesn't quite make the character her own. Lawrence certainly does, even if she isn't around for long. The two share one of the film's best and most heartbreaking moments.

While McAvoy is always solid, Fassbender gets better with every minute of screen time as Erik. This is a character and actor I would like to see a spin-off film from. Fassbender's work is easily the most confident and grounded of the cast. He's trying to do something there.

Jessica Chastain's villain is a forgettable one. Playing a mysterious being who wants to use Grey's newfound ability for her own gain, the actress does everything she can to make Vuk something more sinister than we've seen, but it's nothing new. Chastain is simply there to create a bridge for Grey to break even more bad, but we all know what the ending holds.

It's that predictability that keeps Dark Phoenix from being great. While seeing these characters together again in something not resembling a train wreck, the disappointing part of the story is indeed the end that we all see coming from a mile away.

If you just want a better movie than Apocalypse, buy a ticket and take a seat.

Dark Phoenix succeeds better in individual moments than as a cohesive whole, which makes it a fine if not particularly must-see experience.

Power can be an incredible tool, but it all depends on who wields it. Simon Kinberg tried to create a powerful finale, but in the end, that power was gone a while ago.

RELATED: Yadier Molina is a finalist for the Muhammad Ali Sports Humanitarian of the Year Award