Violent weekend in St. Louis: 5 killed, 15 shot in the city

A St. Louis police officer was among those killed in St. Louis. Two teenagers were injured in the shootings 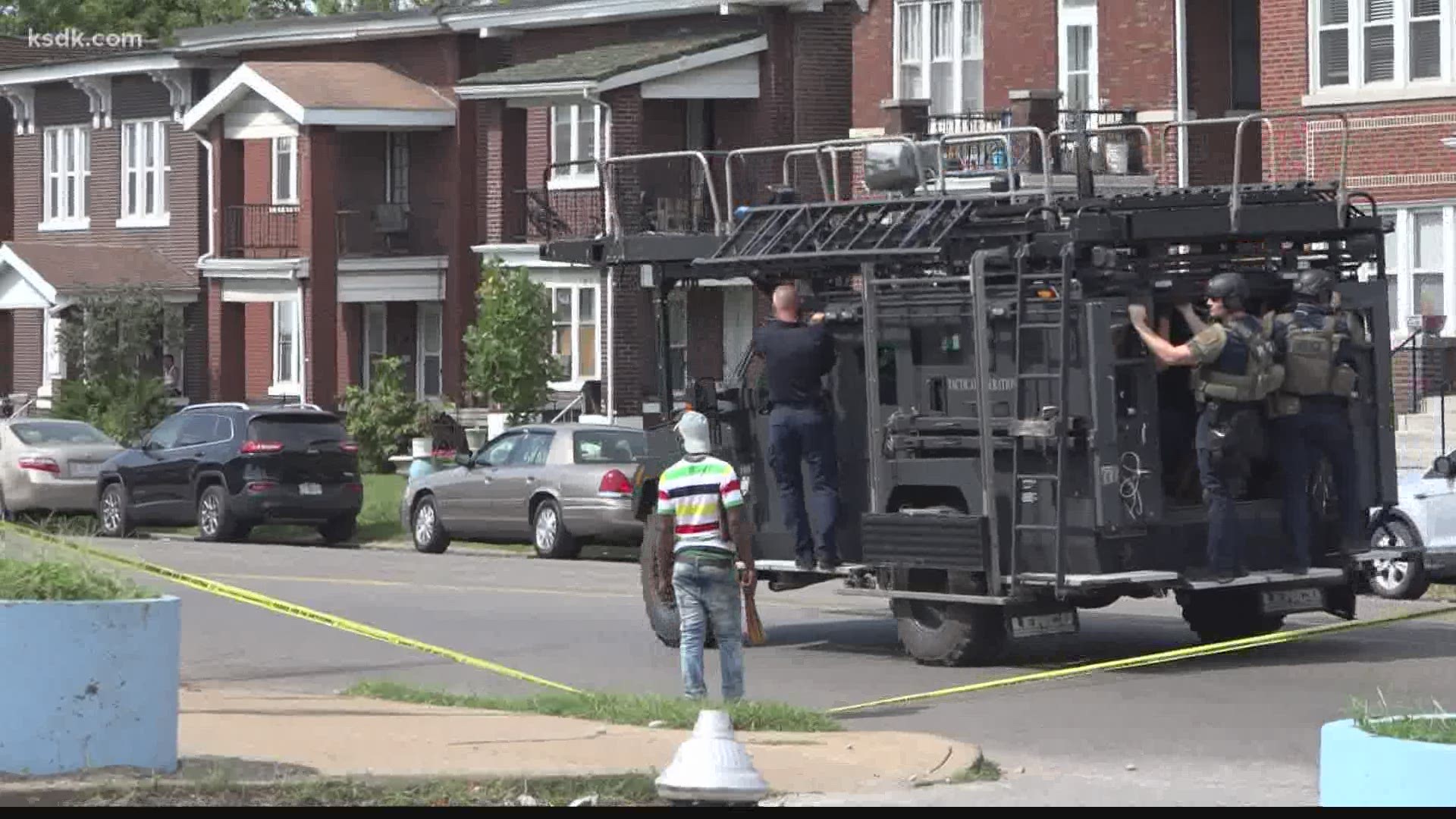 Of the shooting victims, two of them were teenagers – both 16 years old. The teens survived their injuries. There have now been at least 101 children shot in the St. Louis city limits in 2020. Of those shootings, 15 children have died.

Below is a breakdown of the violence in the city from Friday through Sunday according to the latest information from the St. Louis Metropolitan Police Department.

Anyone with information on any of the shootings below is urged to call the Homicide Division directly at 314-444-5371. Anyone with a tip who wants to remain anonymous and is interested in a reward can contact CrimeStoppers at 866-371-TIPS (8477).

Officers responded at 12:04 a.m. to the 3700 block of Tholozan, which is near Gravois and Grand in the Tower Grove South neighborhood. They arrived to find a 16-year-old boy who had been shot in the foot. He told police he was at Tholozan and Spring when a black SUV drove up and unknown people inside started shooting at him. The boy was taken to the hospital and was listed in serious condition; his vitals were stable, police said.

At 3 a.m., police responded to the 5000 block of Page Boulevard for a report of a shooting. Officers found 28-year-old James Andrew Hayden Sr., who had been shot multiple times. He was taken to the hospital where doctors pronounced him dead.

At 11:50 a.m., a shooting victim walked up to officers at Natural Bridge Road and North Grand Boulevard and said he had been shot in the buttocks. The 40-year-old man told police he was walking by the Grand Motel when an unknown person in a blue SUV shot him.

At 4:45 p.m., police received a report of a shooting in the 2400 block of North Euclid where they found a man who had been shot in his arm. The 31-year-old victim told police he was walking in the area with his two young daughters – who are 5 and 7 years old – when the driver of a black sedan stopped the car, got out and shot at him. The victim was taken to a hospital. His daughters were not injured.

At 5:45 p.m., a man was shot in his leg in the 2200 block of Sidney Street. The 18-year-old told officers he was walking in the alley when two men wearing yellow surgical masks shot at him from a red car.

At 10:30 p.m., a 16-year-old boy arrived at an area hospital with a gunshot wound to his hand. He told police he had been walking in the area of Lumiere Place Boulevard and Carr Street – which is near the hotel and casino – with a group of friends when two people inside a black car stopped to talk to a female in the group. The discussion got heated and the car drove off. The vehicle returned a short time later and someone inside started shooting at the group, the teen said. Police did not have an update on the teen’s condition but said his vitals were stable.

At 12:55 a.m. Saturday, a 21-year-old man arrived at an area hospital with a gunshot wound to his leg. The victim said he was walking in the 1200 block of North Ninth Street when people inside a black car started shooting at him. A friend drove him to the hospital.

At 2 a.m., a man was shot multiple times in the abdomen in the 4000 block of Gravois. The 47-year-old victim wasn’t able to give a statement to police, but the investigation so far suggests he was shot during an argument, police said. He was last listed in critical condition.

At 1:08 p.m., police received a call for a shooting in the 1900 block of Carr Drive. The initial investigation suggests two men got into an argument. One man tried to shoot the other man, but his gun didn’t fire. So, the man who was nearly shot at pulled out his own gun and shot the first man. The man who was shot was taken to the hospital. The man who pulled the trigger hasn’t been found.

At 2 p.m., a 28-year-old man was shot in the leg in the area of Athlone and Rosalie. Police said he didn’t cooperate with officers and refused to give a statement.

At 3:15 p.m., a man was found shot to death inside a home in the 8800 block of Lowell Street. He was identified as 29-year-old Stanley Cunningham Jr. No other information was released.

At 5:45 p.m., police responded to the 3700 block of Hartford in Tower Grove South. Officer Tamarris Bohannon was looking for a shooting victim when a man shot him in the head, police said. Officer Bohannon died from his injuries Sunday. A second officer who was at the scene was shot in the leg. He was released from the hospital. The suspect barricaded himself inside a home. He was arrested after a more than 12-hour standoff.

At 10:12 p.m., three people were shot outside a bar in The Grove. Police responded to Taha’a Twisted Tiki on Manchester and found three people who had been shot: one in the back, one in the leg and the third person had a graze wound to their arm.

At 1:40 a.m., police received a call for a shooting victim who arrived at a hospital with a gunshot wound in his back. The 34-year-old man told police he was walking near Cherokee and South Grand when he saw people in two vehicles shooting at each other. He was shot in the incident, he said. The man called a friend to take him to a hospital.

At 4:30 p.m., a 23-year-old man was shot in the 900 block of Riverview. He told police he was driving in the area when a silver SUV pulled up next to him and someone inside started shooting. After being hit, the victim crashed into a parked car.

At 5:58 p.m., police found a man who had been shot multiple times in the 3800 block of Labadie. He was rushed to a hospital where he was pronounced dead. The man was identified as Deonta Landrum. He was 38 years old and lived on the block where he was found dead.

At 8:06 a.m., officers responded to a report of a shooting in the 3500 block of Bingham. They found a man shot to death inside an apartment. Police had thought a suspect was hiding in an apartment near the crime scene. SWAT team members went into the apartment and discovered the victim but did not find the suspect. The victim was identified as 40-year-old Michael Chapman, who lived on Oleatha. The suspect is a 41-year-old man, police said.