ST. LOUIS — Connection is everything in life, especially on a film set.

The connection between a cast and crew, between an actor and a director, and most importantly, between the audience and the film. That's where the magic starts. The truth is George Clooney didn't set out to make a film about connection with a pandemic-loaded deck, but the real world gave his new Netflix Original film, "The Midnight Sky," a whole new shade of purpose this December. Production wrapped up over a year ago, before the virus swept over the world.

For Clooney and company, the film became extra timely long after production was wrapped.

"We thought the timeliness of it was more to do with politicizing global warming. We thought that was the issue: talking about whether or not, we were capable, with all the hate bouncing back and forth between countries, if that was something that could lead to something like this," Clooney said. "We didn't think at all that we would also have to face the idea of not being able to communicate, not being able to be home, being with the ones you love. We had no idea. Unfortunately, that's how it timed out."

The film follows Augustine (Clooney), a weary scientist stranded at an outpost in the Arctic in 2049, following a global catastrophe that has decimated Earth. Prepared to die alone as the world ends, Augustine suddenly discovers that a spaceship is returning home without knowledge of what took place on Earth, and he also finds and befriends a little girl (Caoilinn Springall) left behind in the evacuation. Together, the unlikely duo must warn the astronauts about the dire conditions back home, racing across a deserted Earth, struggling to make a connection with the ship while slowly connecting to each other. Augustine finds himself as not only a protector of the ship, which is riding in blind, but also a father figure to the little girl.

More than anything, it's a film about finding the will to live for something, even if that reality has the odds stacked against it. Having a good director and leader on set helps the job get done, according to co-stars David Oyelowo and Demian Bichir.

When I asked Oyelowo, who plays the stoic Captain on the returning spaceship, what makes a Clooney set different from the rest, he was quick to praise the director's communication and selfless ability to tell great stories without taking the job for granted.

"He's a great storyteller. He directs the way he would like to be directed. Very respectful of your time. He's really great at communicating," Oyelowo said.

Bichir, who plays one of the crew members named Sanchez, also praised the director's ability to create a natural comfort on set, comparing him to other big time talents.

"It's very similar to other heavyweight sets, like Quentin Tarantino and Steven Soderbergh," Bichir noted. "The whole set has a lot of love and respect for everybody. It's a confirmation that things shouldn't be complicated if they don't have to be. A George Clooney set is a very happy place to be."

Bichir has a very notable speech near the end of the film, where Sanchez talks about time's limitless grip on life and how it affects our lives. When asked about merging his way of thinking with Sanchez's thought process to give a performance, the actor praised the writing and process.

"You know when the scenes flow and the dialogue flows, that all an actor has to do is go into that emotion," Bichir said. "It (time) is one of the subject matters we always think about, right? What is happening, what matters, and what is real?"

What was very real was the cold on location in Iceland, something Springall, who was acting in her very first film with a role carrying little dialogue, noted as the biggest challenge. It was 40 degrees below, which made filming turbulent at times. Clooney wasn't worried about his young co-star, though, noting how her Irish blood provided her with a built-in toughness for rough weather.

But the cold can carry many different forms, sometimes even making an older man's soul cold to the touch. Regret, redemption, and hope all collided in Lily Brooks-Dalton's novel and Mark L. Smith's script-which was something that grabbed Clooney's attention. "I loved the story and the questions that it asks. The problems we are facing are the problems we have done to ourselves. It felt like a beautifully told story, encased in all these dilemmas about regret and redemption."

Telling a story is best when done with a great ensemble cast, which is something he has flocked to since his television days on the set of NBC's "E.R." A constant flavor in all his directorial efforts has been the gathering of signature talent-and "The Midnight Sky" is no different. Outside of Oyelowo and Bichir, you had Felicity Jones, Kyle Chandler, and Tiffany Boone. It has become his preferred method of making a movie.

"You never lose when you're working with really good actors. I remember doing 'Out of Sight' with Don Cheadle and you look at Don and think, he makes every film better. I like ensembles. The first real success of my career was 'E.R.' and that was clearly an ensemble. Those work the best," Clooney said.

The film posed a few challenges for Clooney, who is no stranger to difficult shoots. On the set of Stephen Gaghan's "Syriana," he suffered a terrible injury to his back when co-star Mark Strong knocked him out of a chair during an interrogation scene. "Good one," he acknowledged on the Strong accident, before going into the labors of making the Netflix movie.

"It's hard, because I had to lose all this weight, and I also had to direct. You're doing this part to be really weak. But directing, you have to be the strongest person in the room. It was a weird balance, but I've also cut tobacco for a living, and that's hard."

In Hollywood, it's best to keep the nastiest and most unfortunate dilemmas IN FRONT of the camera, instead of behind it. One thing Clooney did with his cast is let him be comfortable in their own skin, which included allowing them to use their natural accents.

"If it's your own accent, that's a layer of preparation you don't need to worry about," Oyelowo noted. "George wanted everyone to bring themselves to these roles, because it's about connection and humanity, so he didn't want to impose anything else outside of that. There's plenty going on without having to add more layers on top. That's why I was able to change my character's name from Tom Harper to Gordon Adewole, a Nigerian name."

Oyelowo felt closer to his character that way, but it wasn't the only thing his director kept natural. When Jones found out she was pregnant right before filming, she feared her job was lost. But Clooney decided to write her pregnancy into the script, maintaining that connection with his cast. If you don't have that with your crew, the whole mission of making a good movie is lost. For a production that had its trials and tribulation, as well as an unforeseen roadblock during its marketing and release, "The Midnight Sky" is proof that if there's a good leader on set, the job will get done correctly.

If anything, his latest film promotes the fact that George Clooney isn't just a first class actor anymore. According to his castmates, he's now a first class director as well. 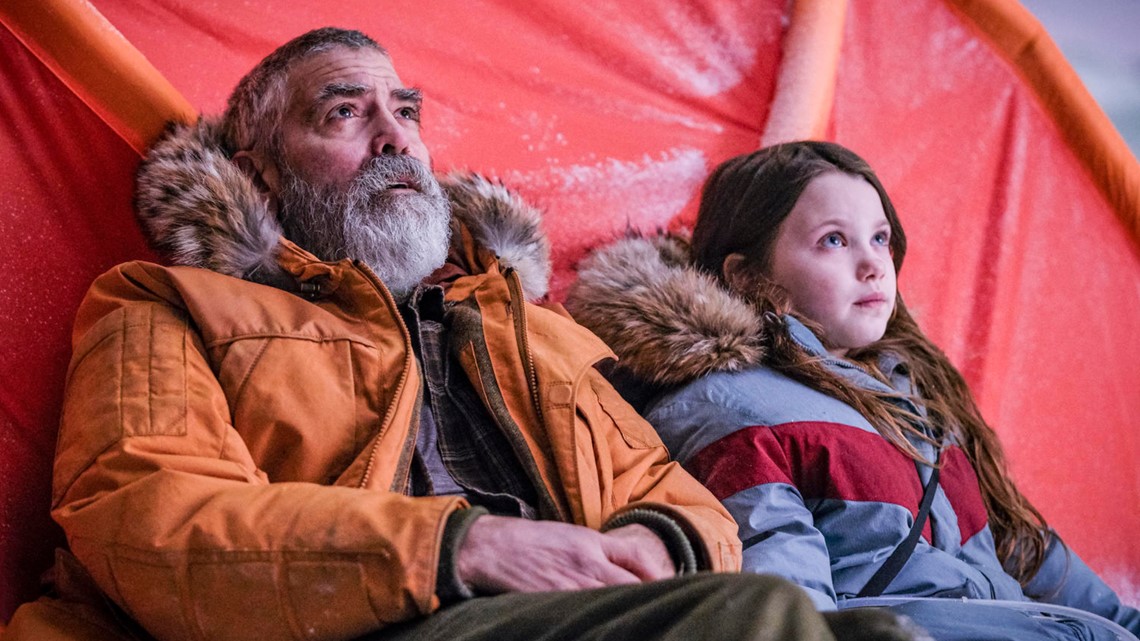 'The Midnight Sky' Review | George Clooney's soulful space drama is one of his finest achievements
Carrying threads from both "The Martian" and "Gravity," Clooney's latest effort is a somber yet very touching sci-fi tale ST. LOUIS - Augustine (George Clooney) has the look of a man who has failed at life.