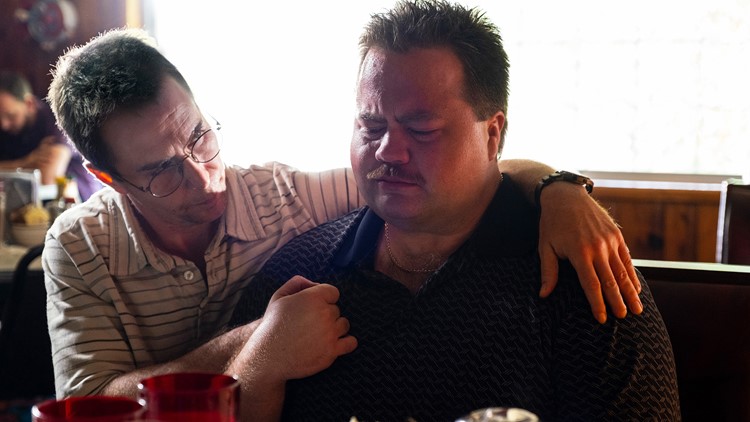 He dreamed of being in law enforcement, collected guns, spoke in a slow Southern drawl, and lived with his mother.

He's the epitome of why no one should judge a book by its cover and the central subject of Clint Eastwood's new film.

"Richard Jewell," based on a true story, takes place in 1996 at the Summer Olympics in Atlanta. Jewell was working as a security guard and helped save thousands of lives when he spotted a bomb under a bench at one of the events. Initially praised as a hero, that cheer faded to vindictive isolation as the FBI (led by Jon Hamm's Tom Shaw) and media (led by Olivia Wilde's Kathy Scruggs) painted Jewell as the prime suspect in the bombing.

Only Jewell's trustworthy lawyer friend (Sam Rockwell) and loyal mother (Kathy Bates) supported his claims of innocence. Eastwood's film, anchored by Billy Ray's adaptation of Marie Brenner's magazine article, is an exploration of one man's willful attempt to clear his name of wrongdoing ... even if he never did anything wrong to begin with.

This is a film that sneaks up on you over its two hour-plus running time. Eastwood's minimalist and unflinching directing style are perfectly tailored to convey Jewell's tale. The film is understated, moves slow but sure, and never forgets to let its actors shine. This is a top flight cast with minimal makeup or overplay.

Hauser caught your attention in last year's "I, Tonya" but he already had mine with his work in the criminally under-watched DirecTV MMA series, "Kingdom." He brings a bristling innocence to Jewell that grows more unnerving by the minute. Rockwell is superb as Wilson Bryant, the one public figure who came to Jewell's defense and became his lifelong best friend.

Scruggs gives Wilde one of her best roles in years, right next to "Drinking Buddies" and HBO's "Vinyl." The hard charging journalist known for her relentless drive to get the story met her match with the Jewell story, and that has a tragic downfall that provides Wilde the opportunity to remind viewers she has looks and chops. Along with directing one of the best comedies in years, "Booksmart," she's having a banner year.

Bates breaks your heart as Bobi Jewell, the devoted mother who couldn't reason why her son's life, and hers as well, was being upended on a search that carried little to no evidence. Imagine watching your son's life be pulled apart for no apparent reason outside of weak circumstantial evidence. Bates is a master here. Hamm knows how to construct sleazy power inside a suit and plays Shaw to a tee. It's not all menace for the St. Louis born actor here. He downplays Shaw's diligence, leading up to a key showdown between Hauser and himself that electrifies.

The staging and sequencing of the bomb scene is riveting, and the pacing here never drags too long. Eastwood and Ray don't let your attention waver, and they do that by handling a timely subject: power's everlasting struggle against the truth, and how television and media sometimes inform people too much, twisting the truth for front page space and public favor.

This is terrific storytelling, and one of Eastwood's finest hours. He directs with a subtle touch and never overdoes a shot or pushes on your senses too much. By the time the film reaches its conclusion, you'll need a moment to register its power because once again, the film sneaks up on you. It goes from a riveting real times account to something much more powerful due to the acting and filmmaking.

Jewell's story deserves to be told, because 23 years later, it still resonates so much. How one man's life can be ruined by the two of the most powerful forces in the world: the government and the media.