Mask mandate in Missouri? Here's what Gov. Parson has to say

When it comes to issuing a statewide mask mandate, Gov. Parson said he believes it's best to leave the decision up to local leaders 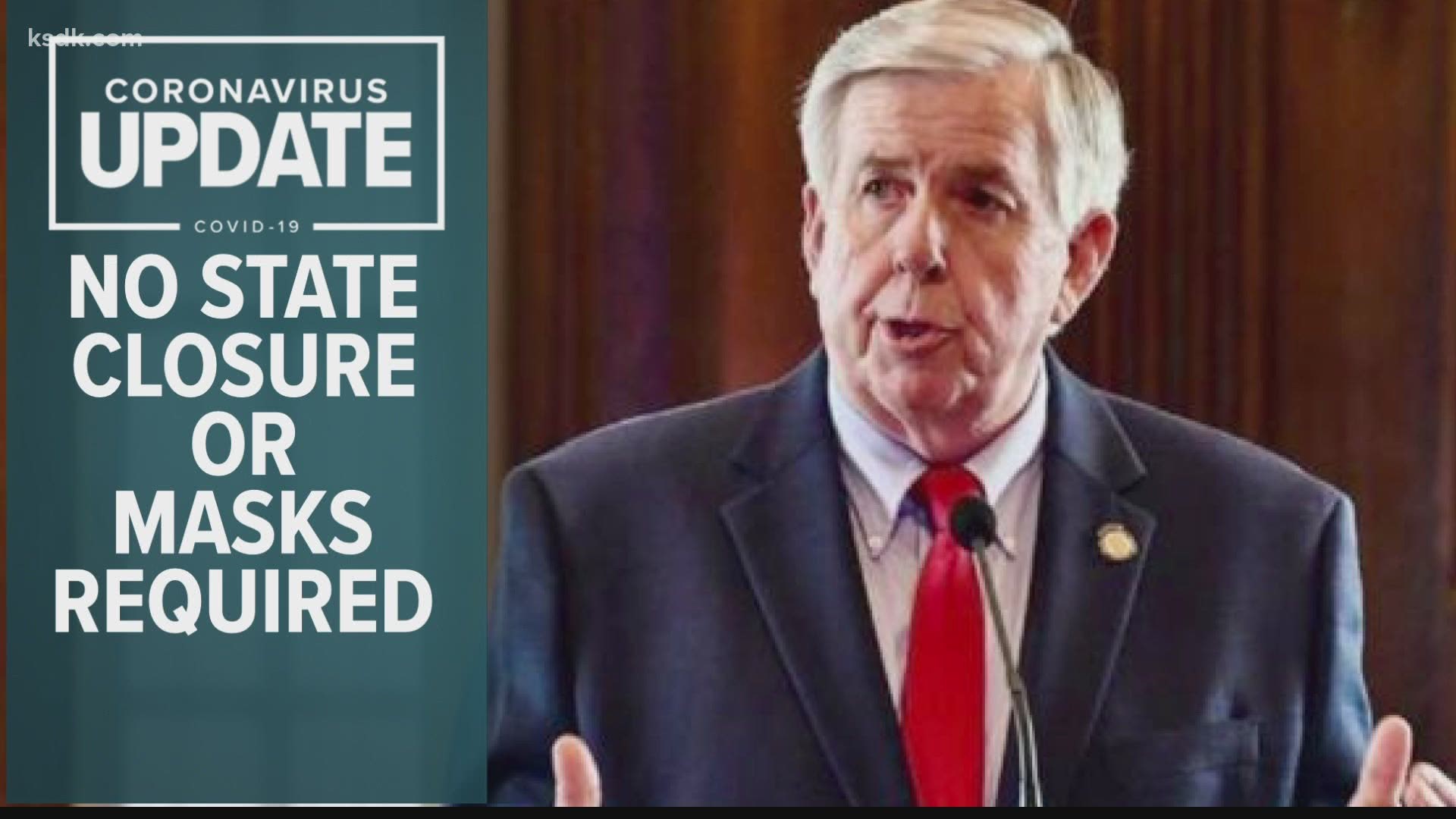 JEFFERSON CITY, Mo. — Cities, states and major retailers are beginning to roll out mask mandates to help curb a rise in coronavirus cases across the U.S. However, Missouri’s governor has made his stance clear.

“Governor Parson has no intentions to institute a statewide mask mandate.”

The short statement was the answer from Missouri Governor Mike Parson’s Communications Director Kelli Jones. 5 On Your Side had submitted two questions ahead of the governor’s planned Thursday afternoon news conference. He did not address them during the briefing, but Jones responded via email. She said the governor wants to leave the mask mandate decision up to local leaders.

“Governor Parson supports local leaders making decisions that they feel are best for their communities,” she wrote.

Gov. Parson has continued to encourage Missourians to wear a mask, especially when they can’t practice social distancing. However, he has shared several photos on his social media pages showing him without a mask while in close proximity to others at events.

“Mandatory face masks — I think that would be the next step for us in the county,” Mayor Dan Borgmeyer said. “All the mayors met for lunch today and talked about it. Nobody’s there yet. Everybody’s on the cusp of that.”

As of Thursday, St. Charles County had reported 544 new cases this week, up 185% from the previous week. People ages 20 to 29 account for nearly a quarter of the cases.

St. Louis County also is reporting a large increase in cases among young adults and children. On Thursday, County Executive Sam Page rolled back the guidelines on youth sports.

As far as whether Missouri will reverse any of its statewide reopening guidelines, Gov. Parson’s communications director offered another one-line response.

“Governor Parson does not plan to reintroduce any statewide closings,” she said.

On Tuesday, the Missouri Department of Health and Senior Services reported a single-day record of 936 new confirmed cases. The state’s positivity rate has increased slightly each day since then. On Thursday, Missouri also reported 11 new deaths from the virus, marking the fifth consecutive day the number of deaths increased by at least 10.

RELATED: What science says about masks

More than half of U.S. states now have rules requiring the use of masks at public indoor settings, with some also requiring their use outside when social distancing is not possible.

Sen. Dianne Feinstein, D-Calif., is proposing that federal relief for COVID-19 in the next stimulus be withheld from states that do not mandate the use of face masks statewide.

"Research shows that masks reduce transmission of the coronavirus," Feinstein said in a statement. "CDC Director (Robert) Redfield said this surge in COVID-19 cases could end within two months if we adopt ‘universal masking.'"

Feinstein also noted that multiple businesses including Costco, Walmart, Kohl's, Target, Kroger and Starbucks are now requiring masks of their customers. And she noted that other countries have managed to flatten the curve.

"So why doesn’t the United States have a national mask mandate?" the senator asked.

While President Donald Trump has stated that wearing a mask is a good idea, he has not yet suggested a national mandate doing so.