Judge grants eviction against St. Peters woman too sick from COVID-19 to be allowed in courthouse

Legal expert says the courts face an eviction "tsunami" even with a CDC order in place to keep people in their homes. 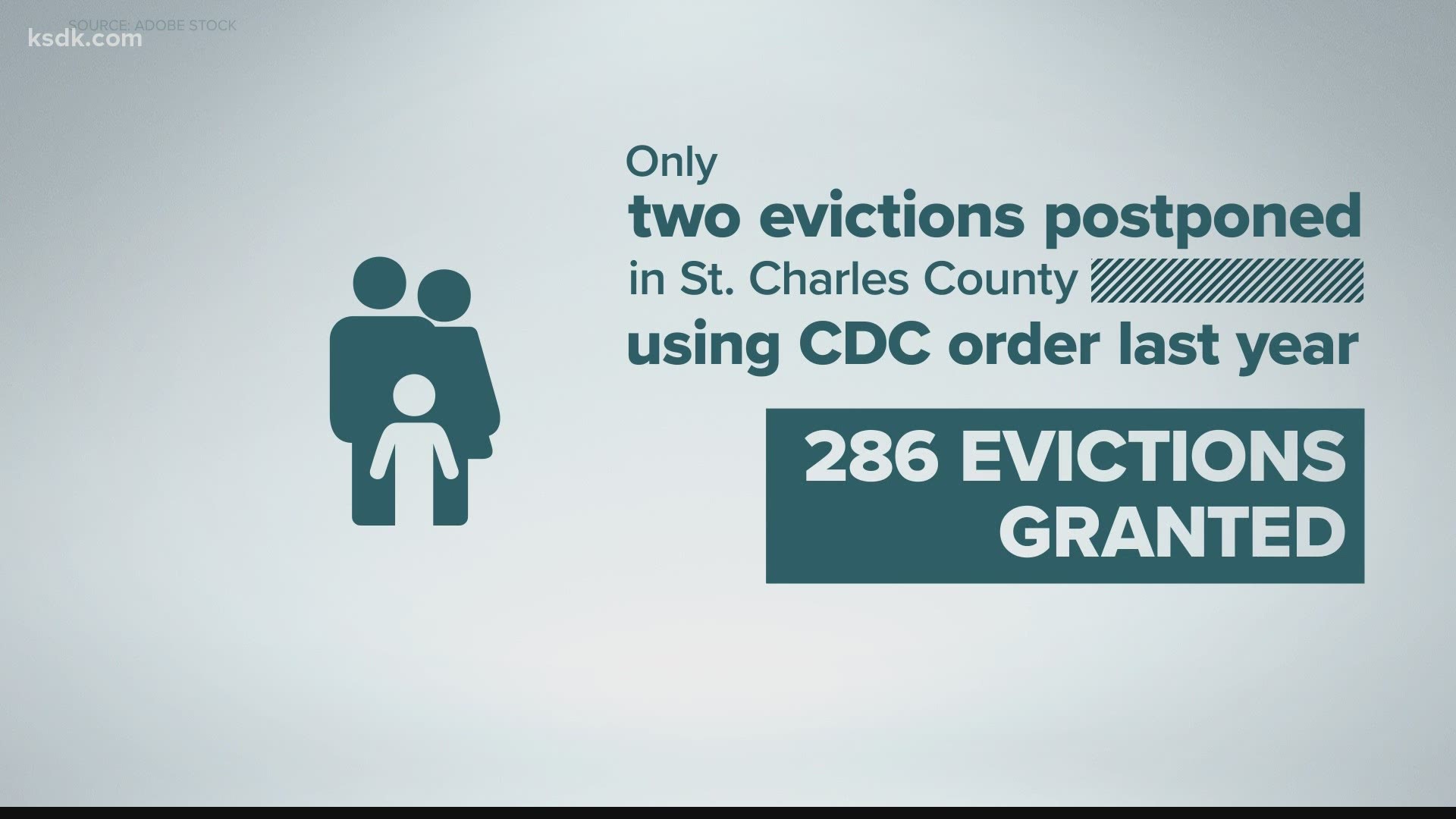 ST. CHARLES COUNTY, Mo. — Sommai Peterson has been in the battle of her life for months.

In December 2020, she was diagnosed with COVID-19, and couldn't work her Amazon job until she got better. Bills started to pile up.

"I just couldn't afford paying the rent," Peterson said. "I had to figure out how to get my car fixed, and [it was] either the car or pay the rent. So I need a car, you know, to go to work."
Peterson says she spent much of 2020 recovering from Cancer and other illnesses that left her struggling to make ends meet. When she was diagnosed with COVID-19 in December, she was already several months behind on her rent.

Before her COVID-19 symptoms had even subsided, Peterson's landlord filed for eviction in St. Charles County circuit court. It's one of only a few courts in the area where eviction proceedings are still moving forward, without a blanket moratorium.

"I still have the symptoms, you know, coughing and sneezing," Peterson said.

When Peterson went to the courthouse in January, security asked screening questions to see if she could be allowed inside. She was honest about her ongoing symptoms and court staff told her she couldn't come in for her hearing.

"Yes, that's all I think about, getting my day in court to explain," Peterson said. "My back pay...that I've been sick a lot."

The staffers told her she would still get her chance to talk to a judge.

That isn't what actually happened.

A witness in the courtroom told the I-Team's PJ Randhawa that a deputy informed the judge that Peterson had arrived on time, but wouldn't be allowed in due to the courthouse's COVID-19 policy.

Peterson didn't learn about the judgment until days later, when she spoke with the I-Team.

"I don't trust the system anymore," she said, adding that she felt "hurt, devastated."

When the I-Team reached out to the circuit court and the judge to ask why a default judgment was entered in the case that day, the judge filed an order to set aside the judgment and put a new hearing date on the calendar. 5 On Your Side decided against naming the judge involved in Peterson's case in order to avoid negatively impacting her case and because of the rapid reversal of the default judgement. The judge declined the I-Team's requests for a statement or interview to explain what happened.

Legal experts say that not everyone gets that second chance.

"We have an eviction tsunami that we're looking at," said Rob Swearingen, managing attorney of the consumer law program at the Legal Services of Eastern Missouri.

"Some landlords have become a little desperate," Swearingen said, "and so they have taken matters in their own hands and have locked out tenants or turned off utilities, taking doors off."

RELATED: Despite federal ban, renters still being evicted amid pandemic

"In St Louis County and St Louis city, we have some heroic judges who have basically put a moratorium on evictions to keep people safe and in their homes," he said.

In St. Charles County, where Peterson lives, it's a different story. That court is hearing eviction cases, and in the last year landlords got 286 evictions from the court sent to the county sheriff for execution.

"But of course, the Centers for Disease Control moratorium applies there," Swearingen said.

The CDC order, originally signed in September, protects anyone from eviction if they

On Jan. 29, the new director of the CDC appointed by President Joe Biden extended the order until March 31.

"It's important that people know that they need to use the declaration if it applies and provide that to their landlord, and then they need to tell the court that they've done so. That's critical," said Swearingen.

Peterson chose not to continue fighting her eviction. She said the atmosphere in her building had become threatening, and she felt safer walking away.

"I don't know what to say. I feel like that I've been mistreated," said Peterson.

Anyone facing eviction who qualifies under the CDC order can take their first step toward putting it on hold by completing a CDC declaration form and giving it to their landlord. They should keep a copy and, if the eviction case has already gone to court, a copy should go to the judge as well.

The declaration form is available here on the CDC website.

Anyone can still be evicted, even if the order applies, if they have engaged in criminal activity on the property, threatened the health and safety of others, damaged or posed a risk of damage to the property, violated building codes or health ordinances, or broken terms of the lease other than ones having to do with paying rent or fees.

Any eviction that doesn't involve the courts, such as a landlord changing locks to keep a tenant out or turning off utilities without a court order, is illegal in Missouri. Information about assistance under the CARES act and tenants' rights is available on the Legal Services of Eastern Missouri website.